Theology for a climate emergency

‘Christian hope is not optimism, and is therefore immune to pessimism’ 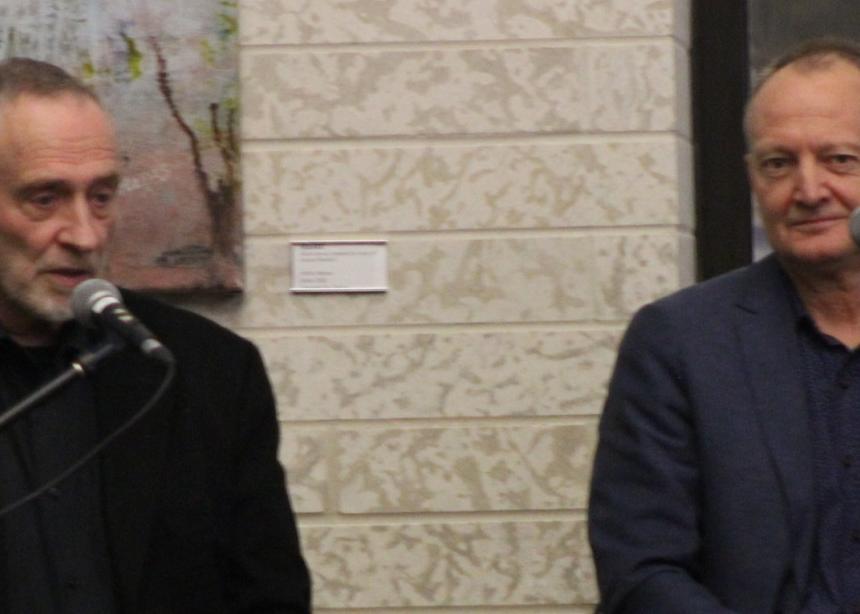 Just days before the forum, 11,000 scientists from around the world unanimously declared a global climate emergency. The scope and weight of this issue showed clearly in the assembly at Marpeck Commons, as men and women across spectrums of age and race turned out to hear three presenters—David Widdicombe, an Anglican priest; Gordon Zerbe, professor of New Testament at CMU; and singer-songwriter Steve Bell—tackle the questions burning in Christian hearts today: How should we live, pray, repent, practise compassion, seek justice and move forward in faith in light of the Earth’s dire prognosis?

- What theological tools do Christians really have for grappling with the realities of climate change?

- What responsibilities do individual churches have amidst the current emergency?

- What historical Christian perspectives might the faithful today be able to retrieve, in order to resist—even oppose—the dominant, ecologically destructive modus operandi of our time?

The climate crisis, Widdicombe said, demands that Christians turn their primary theological and devotional attentions to three tasks: mitigation of ecological damage, adaptation to climate change, and suffering, which is inevitable. Christians can best orient themselves in these tasks, he suggested, by aligning them with the three cardinal virtues or disciplines: faith, love and hope.

“Whatever the church does or says about climate change must be rooted in authentic faith in Jesus Christ as the incarnation of the eternal [word] of God. Jesus Christ, the same yesterday, today, and forever,” he said. “If faith seeks to understand the hidden realities beneath the surface of human affairs, love is its working out in the practical agency of women and men who serve humanity in acts of mercy and political wisdom.

“Here the church must provide all assistance to the many organizations, agencies and individuals who are teaching us to adapt our ways of life to an increasingly hostile climate on a planet of limited resources.

“It requires us to make deeper, more practical commitments to our neighbourhoods. Especially, the church must afford the maximum amount of encouragement to the young people who are courageously and eloquently attempting to change the direction in which we are headed.”

He concluded with these words: “In every age the question of human suffering raises the question of what we can hope for and what our hope is founded on. Christian hope is not optimism, and is therefore immune to pessimism. It is founded on the promises of God vouchsafed to humankind through the bodily resurrection of his son Jesus Christ. Christians await not the end of history, but rather the judgement of God and the renewal of this material creation.”

Following Zerbe’s response to Widdicombe’s lecture, both speakers took questions from the floor. At this time, Steve Bell contributed a question about the inevitability of suffering, and how Christians might prepare themselves for that inevitability. In response, Widdicombe spoke about the value of finding a constructive practice or discipline that can buffer one from “the sheer madness” of what is happening.

“If you listen to scientists or writers talk about all this, you might notice that they’re using their scientific curiosity, or their writing skills, as a way to buffer them from the message they’re delivering to you,” Widdicombe said. “The scientist has a personal interest in trying to think through what that really means. Writers who write about social catastrophe are very good writers and they keep on writing. . . . Teenagers especially need the same kind of buffering. One reason they’re on the streets, I think, is because it empowers them. They have something to do. There’s hope, and it can be a buffer. Thinking theologically about these issues can be a buffer. It’s something constructive to do.”

Widdicombe also emphasized the value of people finding friends and thinking partners among those who have gone before, or who work in different fields than they do.

“I think that people like C.S. Lewis and Wendell Berry . . . can be extremely helpful to us, because these are writers who are willing unflinchingly to look at the worst that could possibly happen to human beings,” he said, recommending Lewis’s essay “The World’s Last Night,” and his 1939 sermon, “Learning in War-Time,” written to students at Oxford after the declaration of war with Germany; and Wendell Berry’s 2017 book, The Art of Loading Brush.

David Widdicombe, an Anglican priest, says that the climate crisis demands that Christians turn their primary theological and devotional attentions to three tasks: mitigation of ecological damage, adaptation to climate change, and suffering, which is inevitable.

Singer-songwriter Steve Bell performed at the opening and close of CMU’s climate-change lecture.

You might want to check out the integrity of the petition mentioned here that is said to have been signed by 11,000 "scientists." Ezra Levant of Rebel News did and the results are hilarious as to who all is purporting to be a scientist. Another source found online shows that some names have been removed from the petition, including Mickey Mouse and Harry Potter headmaster Albus Dumbledore from Hogwarts.

You are correct Elaine Fehr, the petition mentioned that is said to have been signed by 11,000 "scientists" has been debunked by Ezra Levant and others, the term "scientists" to be charitable was a misnomer. How this number was presented without scrutiny by the MSM/CBC reflects the political nature of "climate change" (also a misnomer). A couple of weeks earlier a group of 500 scientists and luminaries sent a letter to the U.N. admonishing them to not use the term "climate emergency", as there is no such emergency, this letter was never given publicity by the MSM/CBC.
This names and vocations of these 500 scientists and luminaries that say there is no "climate emergency" can be found by a google search for ED-brochureversieNWA4.pdf