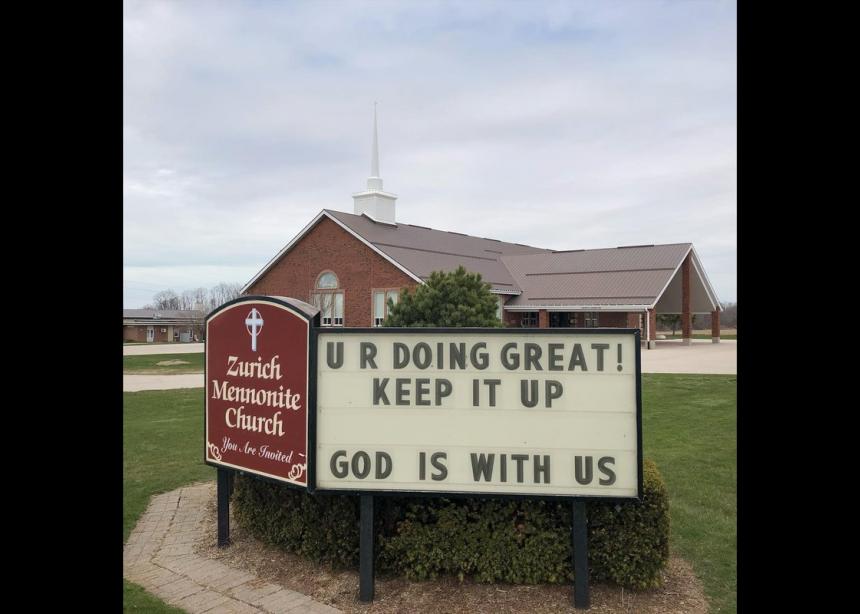 Ryan Jantzi, pastor of Kingsfield-Clinton and Kingsfield-Zurich Mennonite Church, a family of churches that meets in two communities in southwestern Ontario, provided context for the decision his congregations made to end their formal relationship with MC Eastern Canada and join the Ontario Conference of Mennonite Brethren Churches.

In June of 2018, Kingsfield members acknowledged a growing sense that they were “out of sync” with the values and priorities of the regional church. This meant gradually becoming more isolated, which, according to Jantzi, was “not healthy” and “not life-giving.” They longed to be “partnered more closely in mission.”

Church leaders initiated conversations with all households in the churches, and with MC Eastern Canada leaders. The result was affirmation to “explore other potential affiliations.” By March 2019, they became associate members of the provincial MB conference, giving both parties a chance to get better acquainted. In January 2020, the Kingsfield congregations held a two-part vote, with just over 80-percent affirmation, to end formal membership in the regional Mennonite church and to join the MB conference, which took place on Feb. 22.

Their primary “concern regarding the Mennonite church landscape” focuses on central convictions around salvation and mission, according to Jantzi. The Kingsfield congregations affirm that Jesus is the only way to salvation, and their sense of mission is evangelical, which they understand to mean that “everyone, everywhere ought to be invited to place their faith in Jesus.” This is “not a departure from who we have been historically,” Jantzi says. Rather, it feels like “the Mennonite church landscape has shifted.”

A secondary concern was that they were not in sync with MC Canada’s journey on sexuality. But Jantzi names that, “even as we hold to the overall historic, traditional teaching on this, we are also adapting in this area.” He says, “We also are on a journey of learning how to care for and disciple those who experience same-sex attraction and gender dysphoria. This is a growth area for us too.”

The Kingsfield congregations continue to value their Anabaptist flavour, but want to hold this “broader kingdom ethic” alongside an evangelical sense of mission.

Jantzi says they look forward to continued relationships through Mennonite partner agencies, and he expresses gratitude for the many “points of blessing” they received while they were formal members of MC Eastern Canada.

Maple View Mennonite Church, near Wellesley, also became an associate MB member last June as part of its discernment process. They, too, held a two-part vote, with “strong affirmation,” to leave MC Eastern Canada and join the provincial MB conference as full members, which they did on the same day as Kingsfield.

Brent Kipfer, Maple View’s pastor, explains his church’s departure from the regional Mennonite church. He says that “for quite some time” many people at Maple View, which identifies itself as an evangelical Anabaptist congregation, have noticed “more widely varying theological diversity within MC Eastern Canada and MC Canada.”

Specifically he names “understandings of biblical authority, Christology, the essence of the gospel, the nature of mission [and] sexual ethics” as core convictions where this diversity was apparent, saying Maple View longed “to be part of a church community able to offer a greater degree of support and accountability . . . in theology, mission and ethics, than what is currently possible in MC Eastern Canada and MC Canada.”

Kipfer understands that “many across MC Canada know Maple View primarily through [its] 2017 statement on sexuality, ‘Honour God with your bodies,’” which the church paid to publish in Canadian Mennonite. He acknowledges that MC Canada’s Being a Faithful Church process, which created space for churches to have views on sexuality that diverged from Article 19 of the Confession of Faith in a Mennonite Perspective, ”spurred Maple View to review its relationship with the denomination.”

But, he says the congregation’s “concerns about sexual ethics [are] a secondary expression of a deeper theological divergence . . . anchored in a more substantial discomfort with the range of theological diversity in the denomination.”

In a letter to MC Eastern Canada leaders, Maple View stated its “appreciation and blessing to the MC Eastern Canada family of faith…[which] extends to MC Canada.” Kipfer adds, “We have been greatly blessed by followers of Jesus in MC Canada, continue to appreciate them, and joyfully count them our brothers and sisters in Christ.”

After repeated attempts to communicate with church leaders, no one from Living Water Community Christian Fellowship, now known as Living Water Fellowship Church, in New Hamburg, chose to make a statement at this time.

David Martin, MC Eastern Canada’s executive minister, says that the regional church “is very gratified that the changes in our formal relationship with these congregations is taking place on good terms. We are pleased to have had the opportunity to engage with each congregation in frank and helpful conversation. The decisions being made have been taken after careful discernment.”

He adds that the regional church “respects the various decisions that each congregation has made in terms of how they desire to follow their call to ministry. Even though our formal affiliations are changing, we have taken the time to pray together and bless each other. We will continue to pray for each other and ask for God’s blessing on our respective ministries.”

"The Kingsfield congregations continue to value their Anabaptist flavour, but want to hold this “broader kingdom ethic” alongside an evangelical sense of mission."

I would be interested in learning what "broader kingdom ethic" means. How is that defined?

Simply put, we believe that the mission of the church extends beyond simply personal salvation and the 'afterlife'. Jesus bringing his kingdom to earth means we also deeply care about forming community, living out Jesus' commands and working for peace and reconciliation.

Thank you for your response, Ryan.