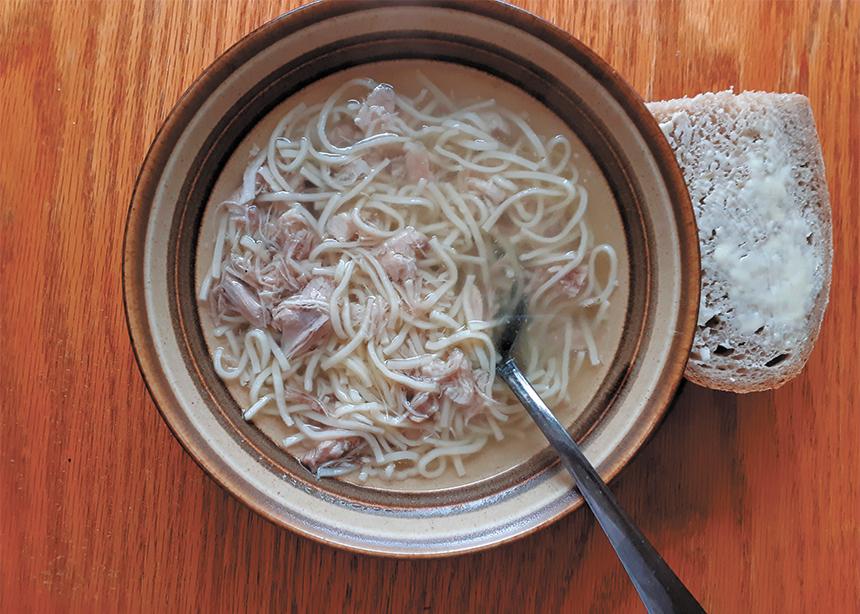 My grandmother didn’t write down her recipe, but my aunts put their heads together to recall how Grandma made her chicken noodle soup. I received lots of help from my aunties Mary Fransen, Nettie Peters, Louise Friesen and Helen Loeppky. The photo is by Lynette Froese, who is the daughter of another aunt, Margaret Froese.

You can read the story about my grandmother’s soup here.

On noodle-soup day, a hen (past the egg-laying stage) is caught, and the head chopped off on a chopping block. A large pot of water has been brought to a boil in advance. The chicken is dipped into the scalding water to release the feathers. Grabbing the chicken by the legs, all the feathers are immediately plucked. The hair on the hen is removed by rotating the chicken over a small alcohol flame. The hen is then washed in cold water to get it ready to be drawn. The chicken gizzard and liver are saved as a delicacy. Drawing the innards of the chicken takes some skill. To maximize nutrition, the chicken feet are cleaned and later boiled along with the rest of the chicken. The hen is thoroughly rinsed and then placed into cold water to get chilled.

Next the chicken is placed in a large pot and covered with water. As the water comes to a boil, the foam that forms on top is removed with a skimmer. The chicken should be boiled at a low temperature until well done, around two hours. Salt is added to taste.

While the hen is boiling, add the following items to give the broth a special flavour:

When the chicken is fully cooked, take it out of the broth, debone it and cut the meat into pieces to be served as a side.

In a separate pot, place the finely cut homemade noodles into boiling water and cook for about 3 to 4 minutes until tender. The starchy water is drained from the noodles in a colander. Stir a dab butter (1 Tbsp) into the noodles. Place the hot noodles in a large serving soup bowl and ladle the broth over the noodles.

With some freshly baked bread, this recipe can be a hearty meal for family of eight plus two hired hands! 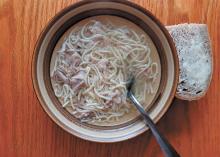