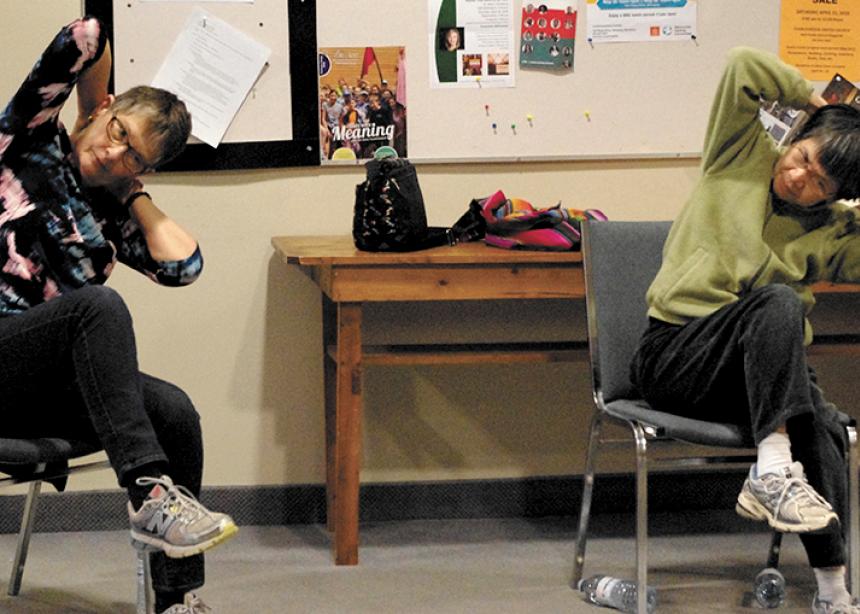 A ladder made of masking tape sticks to the floor of the foyer of Charleswood Mennonite Church in Winnipeg. It’s not a typical sight in a worship space. Yet every Tuesday and Friday morning, a path is cleared through the chairs in the sanctuary, and a small group of seniors ranging from their 60s to their 90s gathers at the church to exercise.

Each workout is an hour long. They start with 20 minutes of walking around the sanctuary and then move their chairs into a circle in the foyer, where they spend 40 minutes doing exercises for strength, balance, flexibility and reaction time, using the chairs for support.

The group started meeting in January under the leadership of Ruth Schroeder, a church member. She is a retired geriatric rehabilitation nurse, who has spent her life helping seniors deal with the effects of aging and illness. Along with an interest in her own fitness and the health of her aging parents, she was motivated to create a space at Charleswood where seniors could have fun working on their fitness.

She is not the first one to initiate an exercise group like this. She got the idea from the Forever in Motion program that runs at Nutana Park Mennonite Church in Saskatoon. Its program, which started in 2011, is one of many in Saskatoon that are supported by the Saskatoon Health Region. It quickly gained popularity, hosting around 30 participants at most sessions.

Although Charleswood’s program is smaller and self-supported, it has gained a core group of about eight participants who come to every session, as well as others who come occasionally.

During an exercise session at Charleswood Mennonite Church, Rosanna Kwan, fill-in leader for Ruth Schroeder, leads the group in some relaxed stretches.(Video by Megan Klassen-Wiebe)

One of the participants is even from outside the congregation. Mildred Schroeder, 93, has only missed one session since the group began. “I want to keep from falling and keep from breaking any bones in my body as long as I can!” she says. “And also it just makes you feel more alert . . . more in control of your walking.” Mildred says that walking in the sanctuary is a lot easier than walking in a house where she always turning corners and having to move stuff out of the way.

“In Winnipeg in wintertime, it’s just there’s no place for people to get out and walk,” says Ruth, noting that for older Mennonites, especially women, going to the gym isn’t something that’s been emphasized in their lives, and a lot of them may not feel comfortable with it. When she suggested having a group meet at church, a familiar and comfortable place, there was immediate interest.

Laura Friesen, 79, says she appreciates the walking and the exercises for balance the most. “Oh yes, I have noticed that my balance has improved tremendously,” she says, adding that everyone has improved over the course of the program, and that Ruth has started incorporating more exercises than when they first started.

Mildred agrees that the program has been a significant benefit for her. “I like to go out every day and do something, and this gives me the energy to do it,” she says.

The Charleswood Mennonite Church exercise group has a lot of fun with an exercise they call “angry baby.” (Video by Megan Klassen-Wiebe)

“It’s been unbelievably positive,” says Ruth. “Like the people that are participating are just so keen and I think we have a fabulous time, but I’ve also gotten lots of feedback from other members in the church that are saying what a fabulous thing it is that you’re doing.”

Turns out that the benefits aren’t just physical either. “It connects me with people who are younger than me and older than me, and we get to know each other better,” says Friesen. She and her husband used to go walking in the church several times a week, but since he passed away, things have been different. She still exercises at home, but it’s not the same doing it alone. “I find that doing exercise together with other people is a lot more fun and interesting than doing it by yourself,” she says.

As the leader, Ruth has also felt the benefits of the group. She was noticing she actually knew all the people around her in church the other day, when she realized she was surrounded by her exercise crew! “I feel much more connected to the church, the church community, absolutely,” she says. “I wasn’t expecting that at all, so that’s been really fun.”

The group has a really good time together and it’s noticeable. “The church, they have expressed to us several times from the office, how happy they are to see us there,” says Mildred. “They said that it just feels good to have such an energetic program going.”

I would love to join your group for a session of exercise. Since the commute would be quite long (from the Yukon Territory), I was wondering if you could possibly make a video of one session. I would gladly pay for it! It looks like you're making big progress and having a wonderful time doing so!

My name is Kimberly Willison, and I am a senior recreation therapist for the Saskatchewan Health Authority. We are the creators of the Forever...in motion program, which is a physical activity program for older adults in the community. We train older adults to be the leaders, then they lead the program for other older adults in their community. Here in the Saskatoon area we have over 125 Forever...in motion sites and over 400 leaders who we have trained to become leaders. The leaders from Nutana Park Mennonite Church are leaders trained by us.

We have an exercise video that we have made by myself and my co-worker, both recreation therapists with 35+ combined years of fitness leading experience. You can contact me at kimberly.willison@saskhealthauthority.ca if you are interested.