At a joint service in the Swedish city of Lund almost 500 years after the Lutheran Reformation, Catholics and Lutherans apologized for their past divisions and conflicts, and pledged to deepen their common fellowship and service in the world. Pope Francis joined the president and general secretary of the Lutheran World Federation, Bishop Munib Younan, and Rev. Martin Junge for the service at Lund Cathedral on October 31, the anniversary of the day in 1517 that marks the start of the Reformation. “As Catholics and Lutherans, we have undertaken a common journey of reconciliation,” Pope Francis said. He said there is an opportunity “to mend a critical moment of our history by moving beyond the controversies and disagreements that have often prevented us from understanding one another.” More unites Catholics and Lutherans than divides them, Junge said. “We are one in baptism. This is why we are here at this joint commemoration: to rediscover who we are in Christ.” Held under the title, “From Conflict to Communion - Together in Hope,” the first joint Catholic-Lutheran commemoration of the Reformation at the global level followed 50 years of international dialogue between the Catholic Church and the LWF. —Stephen Brown/World Council of Churches (WCC)

Video: Larry Miller, former executive secretary of Mennonite World Conference on “What’s the Reformation to you?” 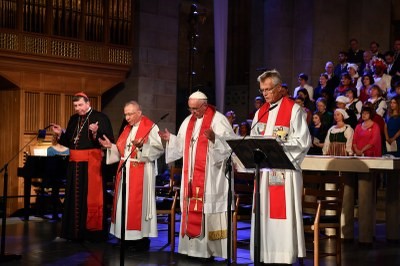 Catholics and Lutherans hold a joint service in the cathedral in Lund, Sweden. (©Magnus Aronson/Ikon)