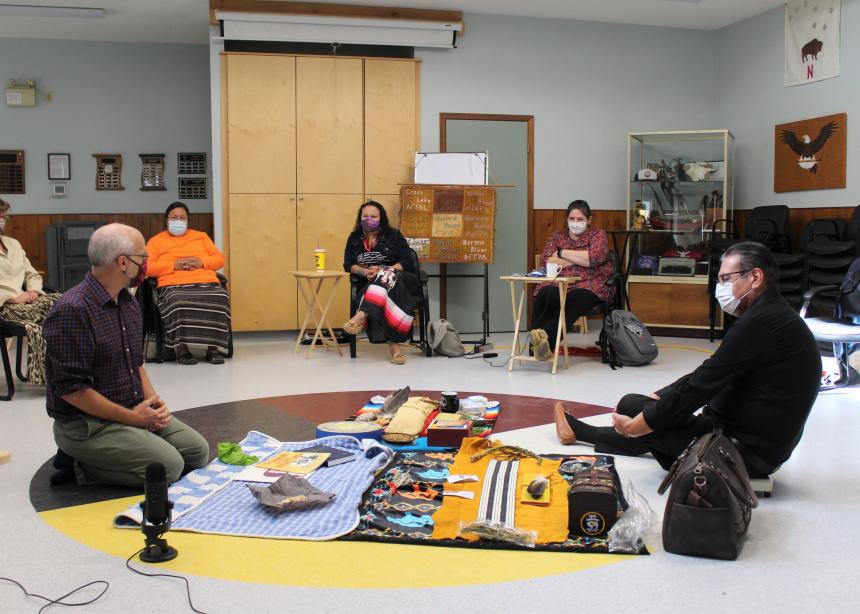 Jonathan Dueck, vice president academic of CMU, and Adrian Jacobs, Keeper of the Circle at Sandy Saulteaux Spiritual Centre, exchange bundles to honour and formalize the relationship between the two organizations after nearly a decade of connecting and working together.

The bundle ceremony is an Indigenous practice of sharing a collection of items and their stories, which are sacred to the giver, and entrusting them to the receiver. When a bundle is physically passed along, so is the responsibility for the gift and for upholding those stories. It signifies meaningful relationship between groups.

Representatives from CMU and SSSC gathered on the centre’s land near Beausejour, Man. on Sept. 24 to commit to developing an academic partnership with one another. The two institutions have already been making connections for almost a decade. Adrian Jacobs, Keeper of the Circle at SSSC, teaches an Indigenous studies course at CMU and sits on CMU’s Indigenous Initiatives Advisory Council along with Kelly Selkirk, an SSSC board member. Groups of CMU students have visited SSSC, learning and spending time together.

The learning communities have discussed forming an official affiliation for a while now. It was important for Jacobs that they mark the relationship in a significant way—with a bundle ceremony. “The desire is more than an MOU, it’s more than points and subpoints,” Jacobs said. “The idea is that this bundle is a gift and an expression of relationship.”

“There’s a deep meaning to ceremony,” said Christy Anderson, Indigenous engagement advisor at CMU. “When we engage in ceremony together, we become relatives.”

Gathered in a circle, the group participated in a smudge and listened as Jacobs recounted the stories within SSSC’s bundle and Jonathan Dueck, vice president academic of CMU, narrated the meaning behind the university’s bundle.

The bundle gifted by SSSC was enveloped in a bear blanket, representing courage and healing. It held a replica of the Two Row Wampum Belt that dates back to 1613, marking a relationship between the Dutch settlers and the Haudenosaunee people and the desire for peace, friendship, respect, equity—something Jacobs hopes for the relationship between SSSC and CMU.

It also included an eagle feather, wild rice and bean seeds harvested from the land, and a medicine chest filled with tobacco, sweetgrass, sage and cedar. Each item represented deep connections with people, land, and history.

“That is a beautiful and remarkable gift. Thank you so much for both the gift and sharing the stories in it,” said Dueck.

The bundle gifted by CMU was wrapped in a blanket made by Dueck’s relative, to show the importance fabric carries for Mennonites and the stories it holds. It contained a copy of Hymnal: A Worship Book, a representation of Mennonite theology and community through singing, and also the first hymnal including a significant number of Cheyenne Mennonite hymns. The Martyr’s Mirror tells a history important to many Mennonites and Soul in Paraphrase is a poetry journal sharing the voices of CMU students today.

Also included was an acorn from a descendant of the Chortitza oak tree, a tree at the centre of community in Mennonite settlements in Russia, which immigrants brought to Manitoba and planted. The seeds of a Gete-Okosomin squash grown at CMU, came out of seed saving activities that drew together faculty, students, and community members, including Indigenous peoples who shared stories of the seeds.

“I'm thankful for being able to be a part of the connections with CMU,” Jacobs said.

CMU president Cheryl Pauls expressed gratitude for the exchange and for the relationship between the two institutions, and the people within them.

“Our desire is to honour the gift of this relationship and learn together,” she said.

Jonathan Dueck, vice president academic of CMU, and Adrian Jacobs, Keeper of the Circle at Sandy Saulteaux Spiritual Centre, exchange bundles to honour and formalize the relationship between the two organizations after nearly a decade of connecting and working together.