A hope for home 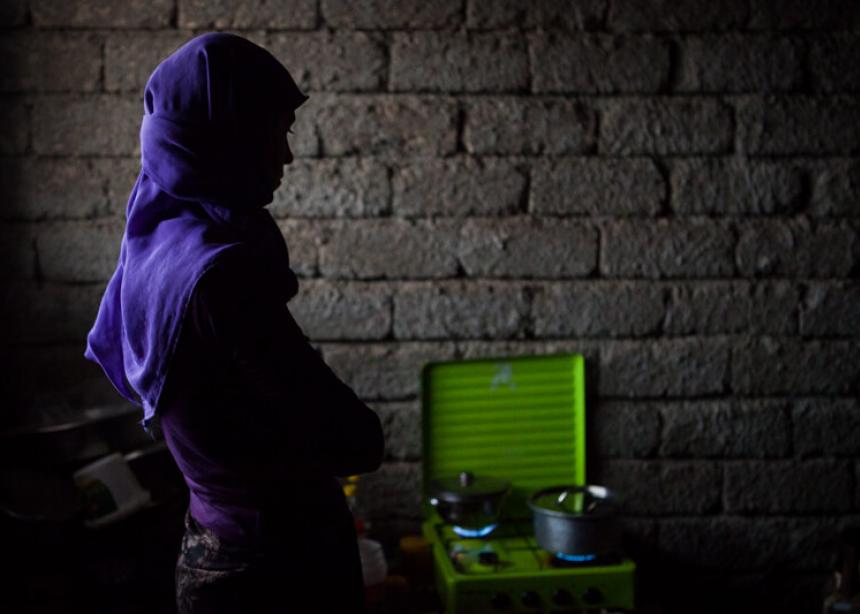 For the most part, Syrians forced from their homes dream not of going to Europe or Canada, but of going back home. “They are in love with their country,” say Mennonite Central Committee (MCC) representatives for Lebanon and Syria, who cannot be named for security reasons.

MCC staff—who work with local partner organizations in some of the most chaotic areas of Syria, as well as with refugees in bordering Lebanon—speak about Syria as a place with a strong pull, not just a place to flee. One bishop they work with in the ravaged city of Homs presides over a church that was founded in AD 47. He’s not leaving. Like many other Syrian Christians, he considers his homeland the cradle of Christianity.

“This is home; they are not going to give it up,” MCC staff say via Skype. They say that local partners speak of how gracious it is of countries like Canada to receive refugees, but the greatest need is in the region itself. People don’t want to have to flee.

MCC staff tell of one refugee father who, driven by desperation, was ready to take his family and risk the treacherous trip by sea to Europe. His wife didn’t want to. That’s understandable, given that since the death of refugee toddler Aylan Kurdi made the world shudder last September, at least 340 more children, many of them babies or toddlers, have drowned in the eastern Mediterranean, according to the United Nations Refugee Agency. Through an MCC partner, the family debating the trip to Europe obtained Canadian Foodgrains Bank food vouchers, which made the difference for them between getting on a dingy headed into the Mediterranean and staying on dry ground.

Based on news reports in Canada, fleeing the region almost seems like the only option. Syria looks like a country without a future. But the tone of MCC staff in the region is different. Faced with the gravity of the situation up close, they nonetheless look toward a future for Syria, inspired by those who hope to return one day and by those who refuse to leave.

The aid these Syrians receive nurtures that hope. Some refugees in Lebanon speak about aid as that which sustains them, in body and spirit, while they wait to return home.

Then there are those who have stayed in Syria amid the violence and deprivation. MCC staff speak of how their local partners inside Syria, many of them members of religious organizations, feel called to stay. “These are the people who will rebuild the country,” they say. “They are amazingly resilient.”

To date, MCC has spent $45.7 million on the Syria-Iraq crisis, making it MCC’s largest disaster response ever. Half of that has been spent in Syria and the rest in the neighbouring countries of Lebanon, Iraq and Jordan. MCC works through nearly 30 local partners throughout the region.

More than half of all Syrians have been forced to leave their homes; 4.6 million have fled the country while another 6.6 million are displaced within Syria [http://www.unocha.org/syria]. Another 3.3 million Iraqis are displaced internally.

The situation is going “from bad to worse,” according to Bruce Guenther, director of disaster response for MCC Canada. “We're rounding to the millions,” he says, in relation to the disturbing magnitude of the crisis.

MCC’s work in the region falls in two general categories. One, of course, is humanitarian assistance, which includes food, water, shelter, winterization and education. The other element is less tangible; it includes peacebuilding and dealing with trauma.

MCC staff tell of a community theatre project in Aleppo, Syria. In Aleppo today, electricity is “pretty well non-existent” and water flows once a month if the people are lucky. For many people, their days consist largely of dodging sniper fire to get water and food. On a very good day in Aleppo, people may be able to have a family picnic at one of the parks that is still suitable for such purposes. The recent ceasefire has made this more possible.

In that context, the interactive theatre production started out as a love story that crosses traditional divisions. Audience members participated in guiding the ending. Each of the three showings was attended by 400 to 500 people, including Christians and Muslims of various sects. The theatre was 200 metres from a sniper lane that people had to run down to get there. The purpose was to bring diverse people together to enter a story of peaceful co-existence. The project was funded by money MCC obtained from Canada's Office for Religious Freedom, established by the previous Conservative government.

MCC also supports a partner organization—such organizations cannot be named for security reasons—that holds weekly gatherings for refugee women in Lebanon. The program offers trauma support, life skills training and simply a dignified environment in which women can gather to share common experiences. Many have been living as refugees for two or three years. This particular program includes many people who fled Islamic State in the Raqqa area of Syria. They and their children have seen the most dreadful atrocities. The gatherings are a welcome relief from the physically and emotionally exhausting existence of a refugee.

Sometimes the tangible humanitarian projects also serve deeper needs. MCC staff speak of how an aid project in the region between Damascus and Homs has contributed to inter-religious solidarity. The project, which served both Muslims and Christians, created such a bond between the groups that when extremists threatened a Christian church, local Muslims occupied the church and told the intruders that they would first have to kill them if they were going to desecrate the church.

Message for the West

MCC is closely connected to local partners in the very thick of the most prominent geopolitical hot spot in the world today. What message do these groups have for North Americans?

First is “thanks.” Partners and beneficiaries “again and again say, ‘Please say thank you,’” according to MCC personnel. Second, local people say they want enough assistance that they can wait out the current crisis. They don’t want to leave the region. Third, they want us to advocate for an end to the war. Finally, they say that we should stop sending arms to the region.

MCC has passed this message on to Canadian officials. In a Feb. 23, 2016, letter to Prime Minister Justin Trudeau, MCC expressed support for the government’s commitment of $1.1 billion in aid for the crisis over three years. At the same time, MCC said it is “deeply concerned” about Canada’s ongoing anti-Islamic State military involvement, including its reconnaissance and refuelling assistance for air strikes. “Our Syrian and Iraqi partners have reported,” the letter stated, “that as coalition airstrikes attempt to retake cities from [Islamic State] not only do they cause immeasurable harm to civilians, but they demolish vital health, sanitation and educational infrastructure.” The airstrikes are “counterproductive,” leaving “cities virtually uninhabitable and fuelling massive displacement.”

MCC also said its partners are “very concerned that Canada’s provision of military equipment will have a destabilizing effect across the region” because the potential for weapons to end up in the wrong hands is “unacceptably high.”

A spokesman for the Canadian Armed Forces says in an e-mail that Canada “will provide equipment such as small arms, ammunition and optics” to Iraqi security forces. This “bolsters a critical component in the fight against [Islamic State], thereby contributing to the stability and security of Iraq and the region.”

While critical of Canada’s military role, MCC praises its contribution to what its partners see as the only solution: “rigorous support for a comprehensive political process in Syria, strengthening inclusive governance in Iraq, supporting peacebuilding initiatives that prevent religious and sectarian violence, and investing in humanitarian measures that build regional resilience.”

A few years back, MCC was struggling to raise awareness and funds for Syria. Syria was old news and matching funds were going elsewhere. That has changed dramatically, due largely to the photo of Aylan Kurdi’s limp body and the Liberal government's openness to refugees. Canadians have responded enthusiastically. As of the end of January, MCC had received 974 applications from Canadian groups wanting to sponsor refugees from the region.

But has this distracted from the primary need overseas? Guenther says the opposite has happened. Donors are interested in bringing refugees to their communities, and also in supporting those who want to stay in the region. Since last September, when the Kurdi photo appeared, MCC donors have given as much for Syria as they did in the previous four years combined, about $4 million.

Those contributions help to nurture belief in the future of Syria, a belief that must ultimately be held not only by the bishop of an ancient church in Homs, or bullet-dodging theatre-goers in Aleppo, but by the international community as well.

See also: Who is matching whose funds?