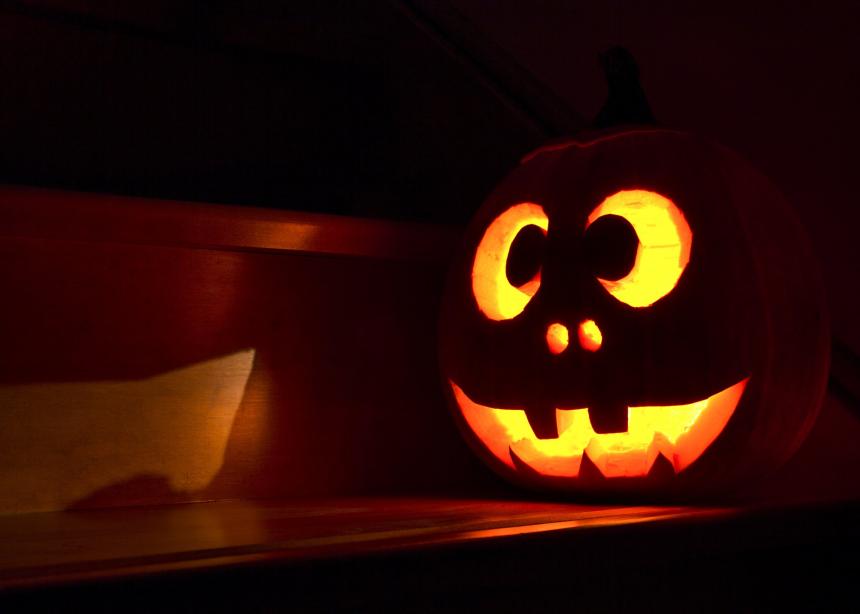 When I was a kid, Halloween was one of the best nights of the year. We lived in Drumheller, Alta. then. My mom and dad were both quite into Halloween and often lent their skills to the creation of fine, sometimes elaborate costumes. The costume I remember most vividly was worn the year I went out as a Roman Centurion. My mom, good at sewing, made the clothing and my father had somehow constructed an impressive Centurion helmet out of a plastic Javex bottle. Dad and I crafted a sword of wood and gilded in tinfoil. Mom attached leather straps to sandals so they criss-crossed up my legs to the knees. As far as I could tell, I had the best costume in town and more than one envious kid said as much.

In those days, it seemed like every kid and half the adults in town were out on the streets as we attempted to fill our pillow cases ‘til they were so heavy we had to return home to empty them before going out again. The only hint of real evil that anyone concerned themselves with came from isolated incidents of pins or razor blades having been inserted into apples. And so mom would make us cut up the apples before we could eat them. Otherwise, it was just good fun.

Then over the years things started to change—with increasing incidents of tampered-with malevolent treats there came to be real safety issues. I remember the first time I heard of a local church officially abstaining from Halloween on the grounds that it was a “real” occult festival and therefore a Christian’s duty to resist. They, instead, opened the church basement for an alternative night for kids and called it a “Hallelujah!” party. Oh my….

Now, it seems like Halloween has almost become a non-event in our neighbourhood with a handful of wee-ones out with mom or dad between 6 and 7 p.m., followed by an hour or two of teenagers who, for the most part, don’t need to dress up to be a worrisome site.

Too bad. I miss the good ol’ days when the town would be crawling with kids and parents greeting one another, laughing at each other, walking together, knocking on the doors of the elderly who might otherwise never get a visit, celebrating the community by being out in it.

So, how did we lose this?

It’s true that the origins of Halloween come from a dark, Celtic pagan festival called Samhain. The Celts believed there was a night every fall where the veil between the living and the dead became very thin and indeed, the souls of the dead could cross over to the land of the living. This was frightening as it meant that besides the souls of departed loved ones, the souls of one’s enemies might also come by with evil intent. To ward off the malevolent ones, the Celts would cut up gourds into frightening faces, and themselves would dress in costumes so as to be unrecognizable to the restless, roaming spirits. It was a long and frightening night to be endured.

According to legend, things changed when St. Patrick came to Ireland. He was aware of and saddened by the annual terror the Celts had to endure,  so he started to teach that as Christians, not only are we not afraid of the dead, but we celebrate the saints who have gone before; those who, still alive in Christ, are always near and dear to us. Patrick started the practice of going out on Samhain with a bag full of sweet cakes and knocking on doors,  cheerfully giving them to his cowering friends and neighbors.

Somewhere in there, and I’m not sure of the dates, the practice of cheerfully going out in generous neighbourliness, instead of cowering in caged fear, became attached to the church’s celebration of All Saint’s Day. And Halloween, All Hallowed Evening, came to be celebrated on the night before the church celebrates all the saints who, though invisible to us, continue to pray for and root for those of us who have not yet completed our journey.

Personally, it makes me sad that the church (in part) seems to have retreated into the very fear-based isolation St. Patrick’s lively faith contradicted. So sadly ironic. And we have done this in so many areas of common life. It seems to me that we could be out participating in the wider culture; joyfully, cheerfully, confidently handing out ‘sweets’ in the various cultural arenas: politics, arts, education, science, festivals, etc. We need not do this in the defensive, combative spirit we’ve become famous for, but with a caring neighbourliness befitting the character of the Christ whom we worship. And we need not be concerned that we will be tainted in our efforts. For we do not draw from a shallow well, but the inexhaustible Christ who gave himself entirely so that all would know that the organizing and redeeming principle of the cosmos is not self-securing fear, but self-donating love.

Steve Bell is a Juno Award-winning singer-songwriter based in Winnipeg, Man. This article originally appeared on his website, stevebell.com.