Embracing the pain of the past and the present 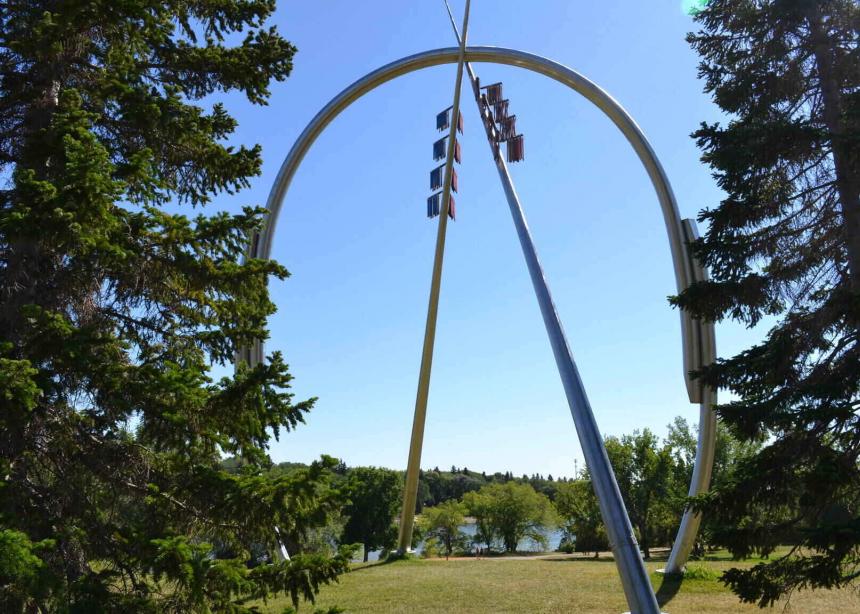 For the past 25 years, June 21 has been set apart by the Canadian government as National Indigenous Peoples Day (NIPD) as a day to “celebrate the unique heritage, diverse cultures and outstanding contributions of First Nations, Inuit and Métis people.” On a typical NIPD here where I live, in Saskatoon in Treaty 6 territory, you might expect large groups of Indigenous and non-Indigenous people marching together, enjoying the beginning of summer, walking for reconciliation through the city, visiting circles of people gathered for song, dance, drumming—the heartbeat of communities asserting their presence, resilience, vitality and determination.

But 2021 is not a typical year, and the word “celebration” is not on anyone’s lips. Large group gatherings are still a health risk. And Canada stumbled into the month of June, National Indigenous History Month, with a punch to the gut: news of at least 215 unmarked graves at the Kamloops Indian Residential School (IRS). From sea to sea to sea, this headline has triggered another wave of pain, grief, anger and disgust among Indigenous communities. And it has caught the attention of the mainstream public. As I write this article (early in June), expressions of serious shock and messages of condolence, sympathy, and outrage continue to pour forth from Canadians of all stripes. Statements abound, including one from Mennonite Central Committee. What more can be said, in the face of this national moment, this rapidly evolving story?

Our first response might be the most fundamentally human, and humane, thing to do: “mourn with those who are mourning.” This calls on our capacity for empathy and our need for proximity and true relationship. But this response comes with two caveats and some related reflections.

First: I regularly hear a deep-seated urge, in Settler responses, to “do something.” It might even grow into a desire to “fix the problem”—and isn’t that really just another exercise of Settler power and privilege, an exertion of colonial control? Perhaps the most important action Settlers can take right now, as postures of personal and communal mourning, is sustained, attentive, focused listening. Listen to the stories of IRS survivors. Move close to the pain, the anger, the outrage, and receive its full force.

The vast majority of Canadians have not done this, yet. Otherwise, why would there be such shock right now? Indigenous peoples, and those who have been listening to them, were not at all surprised by the findings of an unmarked gravesite. They’ve always known of their children who didn’t come home. The Truth & Reconciliation Commission (TRC) clearly outlined and reported the reality of IRS cemeteries (TRC Calls to Action, especially #71-76)—the facts known from existing (and accessible) documentation, and the staggering fact of unrecorded deaths and inaccessible records (withheld by church bodies).

In 2015, the TRC published its findings from the seven years of listening to Residential School survivors, including 260-plus pages of Volume 4: Missing Children and Unmarked Burials. The first page and a half of the Executive Summary by itself is enough to make a person weep, and inflame the anger of a nation:

And this was published already six years ago. Why no public outcry then?

Canada certainly wasn’t paying attention when Dr. Peter Bryce issued his damning report a century ago. Bryce was the first Chief Medical Officer of the IRS system, hired by the Department of Indian Affairs in 1904. After a special three-year investigation of 35 IRSs on the Prairies, his report was published, but his recommendations were suppressed by the government. Bryce quit after he was snubbed for a promotion, and in 1922 privately published a small booklet, The Story of a National Crime. Here Canadians could read, “Regarding the health of the pupils, the report states that 24 per cent of all the pupils which had been in the schools were known to be dead, while of one school on the File Hills [Sask.] reserve, which gave a complete return to date, 75 per cent were dead at the end of the 16 years since the school opened.”

And so, Canada continued to build its most horrifying institution: schools with cemeteries. As our gaze has focused on Kamloops, so it will soon turn to site after site across this land, as investigations proceed and more discoveries are made. Indigenous people will continue to be re-traumatized as settler Canada learns this reality: school-cemeteries are a part of our nation’s foundational infrastructure.

We also need to recognize that schools are not the only sites to pay attention to. The story of “Indian hospitals” and sanatoriums is much less known to Canadians. The segregation they embodied is a precursor to the racism and systemic bias that continues to plague the Canadian healthcare system. We should expect to find unmarked cemeteries at Indian Hospital sites as well.

Indigenous organizations are calling for investigations, more research. We can support these calls. The investigations will be complicated: many of the properties under investigation will be in private ownership now, and it will often involve multiple governmental jurisdictions. There’s much potential for bureaucratic delay. Also: the children buried in these school-cemeteries would have come from multiple First Nations (students were often transported far from their home communities). Tracing those connections will be virtually impossible; at the same time, each of these invested communities will have their own desires for how to move forward, their own cultural and spiritual protocols, their varying capacities for engagement. It will be complicated. If Indigenous communities are looking for allies in this work, they will need allies who are in it for the long term.

A second caveat: we are complicit. It’s one thing for a caring neighbour to come alongside a grieving person to offer condolences and support. It’s another thing altogether when the neighbour is the perpetrator of the harm, whether directly or indirectly, even if that neighbour is sincere in wanting to offer well wishes, to listen, to serve as an ally. A restorative approach means that the needs of the victim are prioritized. In the present case, the Christian Church is horribly implicated in the IRS genocide. And this deeply compromises the possibilities of being a neighbour.

Right now, Canada is watching as the Tk’emlúps te Secwe̓pemc Band, along with many other Indigenous organizations, is facing off with the Roman Catholic church. It is painful to observe, and the outcome is undecided. But many churches and religious groups have been involved in IRSs, and each is called to self-examination and where needed, new choices of submission and sacrifice. That includes Anabaptist groups, even Mennonite Central Committee itself. There is no other way to say it: we have a hand in this story, we are not where we’d like to be in the reconciliation journey, and we have hard work ahead of ourselves. “If it is possible, so far as it depends on you, live peaceably with all” (Romans 12:18). This might be the most challenging service yet that we might offer “in the name of Christ.”

So… how might we respond as people of faith, as people of courage and goodwill, in light of National Indigenous Peoples Day?