Sharing about our holy books 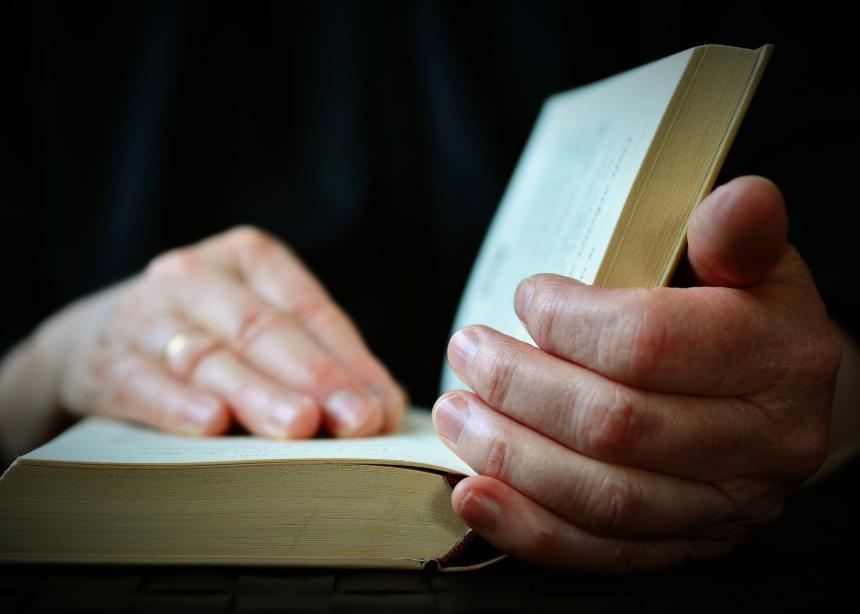 As part of an effort among Alberta Mennonites to bridge understanding between Christians and Muslims, Christian-Muslim dialogues have been organized annually since 2013, under the banner of “A Common Word Alberta.” These have been taking place in Edmonton, but will soon be organized in Calgary as well.

Out of this grew an interest in having more frequent opportunity to get together in small groups to explore each other’s scriptures through common topics. This led to adopting the “Scriptural Reasoning” framework created through the Cambridge Inter-faith Programme to support interfaith groups as they explore their respective faiths. They offer sets of topics with accompanying scripture verses to guide groups in their explorations of faith related to these common topics. The goal is not to debate, but to understand and learn together.

When I first considered joining the Scriptural Reasoning group, I felt a bit timid about being a valid representative of my faith tradition. Scriptural Reasoning invites us into each others’ faith tradition by choosing scriptural passages from the Hebrew Bible, the New Testament and the Qur’an on a topic that is illustrated in each of these passages. I have grown up in a faith tradition, taken some Bible and religion classes many, many years ago, but beyond that, I am not schooled in biblical studies.

We gather over snacks and fellowship, and then read the scripture from each tradition one at a time. Through a circle conversation, we take turns asking questions of the people whose tradition we are exploring. We are fortunate, now, to have all three faith traditions represented.

Initially, we did not have someone from the Jewish faith in the group. We would read the Hebrew scripture and discuss it from our Christian or Muslim faith lens. Now that we have a Jewish person who speaks to these texts, I realize how very different a Christian interpretation and understanding of what we call the “Old Testament” can be from a Jewish understanding.  This has opened up a whole new perspective for me with respect to assumptions and understandings of the Hebrew scriptures.

An outcome of these discussions I was not expecting has been a deepening understanding of my own faith. I was indeed surprised when I found myself defending the Apostle Paul.

Whereas I generally say that I love Jesus, but wrestle with Paul, when one of the Muslim participants suggested that Paul is the downfall of Christianity because he sanctioned breaking the purity laws around circumcision and food, I had a profound revelation: without Paul, I would not have the opportunity to have the faith I have. I am indeed grateful to Paul! And yet, when two weeks later, we looked at the passage on marriage where—for the New Testament passage—Paul exhorts women to submit to their husbands, I had to confess that I struggled. I cannot accept this hierarchy when Jesus empowered so many women.

This confession opened a path for a Muslim participant to confess that she, too, loves the Qur’an, but wrestles with other writings that misrepresent her faith as she understands it. It was a beautiful coming together of people searching for truth through their respective faiths.

Our last scriptural reasoning topic was “non-violent responses to hatred.” The discussion was rich, leading to discussion around forgiveness, and how that works in our lives. The next day, I found a quote from Nelson Mandela that I thought summarized some of our sharing: “As I walked out the door toward the gate that would lead to my freedom, I knew if I didn’t leave my bitterness and hatred behind, I’d still be in prison.” We had truly come together around such an important element of our human experience.

Suzanne Gross grew up in Goshen, Ind. and has lived in Edmonton, Alta. since 1999. As manager of partnerships and collaborations at the Edmonton Mennonite Centre for Newcomers, she has a keen interest in building bridges between people of diverse backgrounds. She is a member of First Mennonite Church (Edmonton). This post originally appeared on Mennonite Church Alberta's North Edmonton Ministry blog.

I appreciate this excellent article about how to share and understand holy books. I have also heard good reviews of the 'scripture reasoning' meetings, obviously an important way of becoming acquainted with our new neighbors as well as learning something about the make-up of their faith. Not yet having participated in these, I need to identify one hesitation. 'Reasoning' suggests a cognitive academic encounter possibly reserved for the learned, the educated ones, and not for the ones with no faith or perhaps only a childlike faith - either in Mosque or Church.

I have just returned from "Walk for Common Ground," a 300 km. walk Edmonton (Treaty 6) to Calgary (Treaty 7), along with Indigenous peoples, church people and health care professionals to raise awareness about the Treaties of our Canadian history. After each day's walk the evenings would include a 50-minute showing of www.treatytalk.com followed by Sharing Circle, and then welcome sleep for tired aching bodies on hard floors in various hosting churches or community centres. Every day the media, both church and secular, had queries about "why we walk," and as the kilometres and relationships among walkers grew, it became increasingly difficult to 'explain it' satisfactorily to those looking for sound bites.

Seems to me that this is possibly also instructive about interfaith dialogue or scripture reasoning. Spirituality, however framed from Holy Books or Traditions or rituals is not fully comprehended or shared without relationships. Seems to me also that in the future before us, interfaith understanding and life among all God's creation will be best served if it also include the camaraderie and endorphins of physical exertion. I am thrilled at the new spirit and understanding which emerged among walkers taking care of sore feet regardless of religious tradition or faith commitment.

What would Jesus do? Would he enter into endless discussions regarding each others' "holy books" while exploring other faiths? Or would He proclaim the truth? “I am the way, the truth, and the life. No one comes to the Father except through Me." (John 14:6)