A crisis of compassion 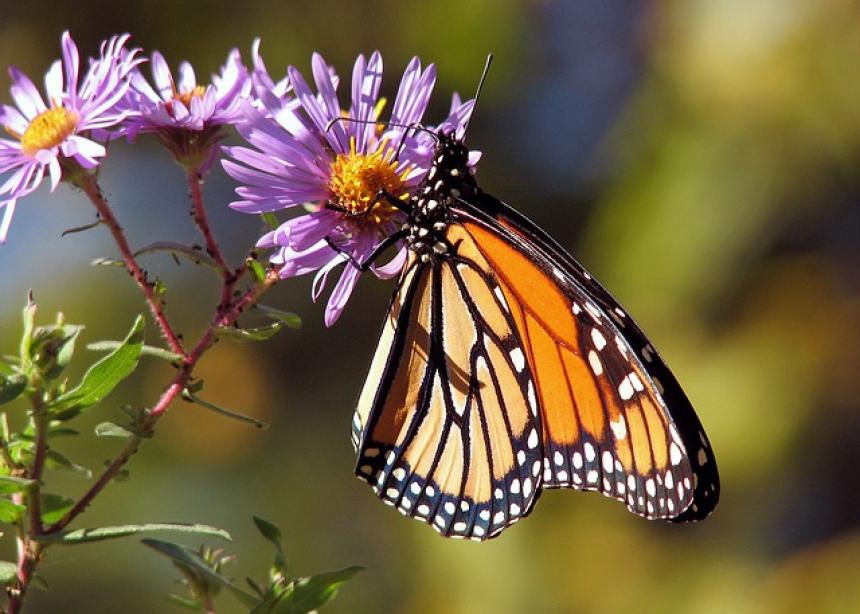 Mennonite Central Committee’s “People on the Move: Human Rights and Global Migration” student seminar in Ottawa this past February sparked in me a new curiosity and interest in the stories of migrants.

Following the seminar, I contemplated and reflected on the different topics, the work of the speakers presented at the seminar, and the conversations I had with fellow participants at lunch hour and breaks.

On the first day of the seminar, we heard about monarch butterflies and how they are the symbol of migration. This image of thousands of butterflies on their migration route really captured my heart and stayed with me during the following days.

Upon returning to Columbia Bible College (CBC), I heard about a new exhibit at the Metzger Collection at CBC featuring art focused on the theme, “The Story We Share.” I decided to use this opportunity to create an art piece based on what I had learned at the seminar in hopes of making the topic of migration more relevant and empirical.

With this art submission, I also had the opportunity to write a description that explains the inspiration behind the piece and how it relates to the theme.

Here is that description:

“You shall also love the stranger, for you were strangers in the land of Egypt.” (Deut. 10:19)

The Bible begins with the migration story of Adam and Eve leaving the Garden of Eden and ends with John in exile on the Isle of Patmos. Between these two events, we read about countless stories of people being uprooted, leaving their homes and seeking safety, sanctuary, and refuge.

The story of migration is woven throughout the Bible and can be seen in the life of Noah leaving home with his family, Abram and his wife Sarai leaving their country for a new land, Joseph’s family moving to Goshen because of a famine, the book of Exodus where God delivers the Israelites out of Egypt, from slavery and oppression, Daniel who was captured and taken to Babylon, Ezekiel and Isaiah who were exiled, Ruth the Moabite who leaves her home to join Naomi in Judah and many others.

The New Testament too begins with Jesus leaving the Father and coming here to earth. Mary and Joseph fled with Jesus when he was just a child and became asylum seekers in Egypt. Migration is a story shared by many people throughout the Bible.

Migration is not only part of our biblical history but also that of our Anabaptist ancestry. Mennonites first migrated to Pennsylvania at the invitation of William Penn and other groups of Mennonites who came from German regions and settled around the Great Lakes and Midwest areas of America.

Many Mennonites were fleeing persecution in the 16th century in Europe and were seeking religious freedom by coming to North America. In the 1800s-1900s Mennonites from Central and Eastern Europe and Ukraine settled in the Canadian prairies. Migration is not a new concept, it is intertwined with our identity and existence today.

Migration is the story humanity shares and moving is part of what it means to be human. This art is inspired by the “People on the Move: Human Rights & Global Migration” student seminar. The monarch butterfly represents the dignity and resilience of migrants and the right that all beings have to move freely. Since migration is a part of the natural journey and life of a monarch butterfly, it is a symbol that migration is natural and beautiful.

I chose to paint monarch butterflies for this reason but I wanted to include another animal that migrates and I settled on a humpback whale because of how different it is from a butterfly. I wanted this painting to emphasize that sometimes we are taken off of our regular routes of migration and that people can end up in unexpected or difficult situations and that it is important for us to work together (as the butterflies in this picture) to help our fellow migrants on their journey even if they are very different from us.

For a single butterfly to carry a humpback whale may seem like an impossible task but with many of us working together and remembering our biblical and Anabaptist ancestry of migration, we can make a difference in the lives of our fellow migrants.

Hannah Gray is a student at Columbia Bible College in Abbotsford, B.C. This post originally appeared on MCC Ottawa's blog. 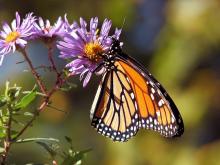