A business built more by accident than by arrangement 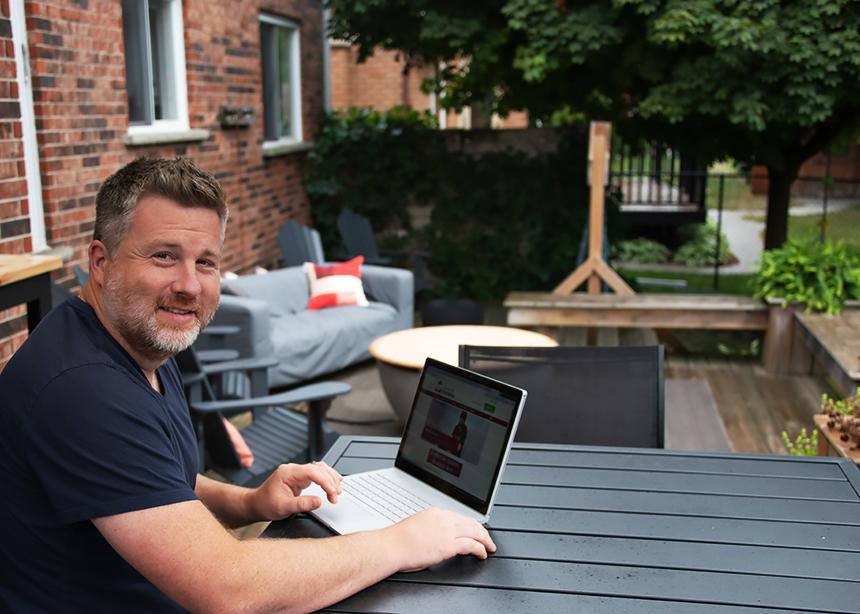 Chris Steingart’s graphic design journey began through creating a website for a church where he served as youth pastor. He is pictured working outside, enjoying the benefits of having a home office. (Photo courtesy of Chris Steingart)

Chris Steingart’s journey to owning a professional web-design business was unanticipated. In 2005, he was working as a youth pastor at Waterloo-Kitchener Mennonite Church in Waterloo, Ont., and he decided that the church needed a website.

When efforts to get volunteers for the project failed, he ended up doing it himself. “How difficult could it be to build a website?”

As his time at the church ended, he and his wife Jillian were just about to leave for a term teaching English as a second language in South Korea. To his surprise, three people approached him offering to pay him to develop websites for them. That led him to set up QT Web Designs.

Applying the philosophy “fake it til you make it,” he created a purpose for himself, and a direction of his own choosing. “And grandma, if you’re listening, it does pay the bills,” he said in a presentation to the Waterloo hub of Mennonite Economic Development Associates (MEDA).

During his two years in Korea, he used his spare time learning about HTML coding and Photoshop. After returning home, Steingart was eager to build his business but lacked customers. He quickly approached several non-profits and offered to build them a website for free.

“My experience at churches and other community organizations was a perfect fit for understanding their needs and style of storytelling.”

Soon his portfolio was growing and included paying clients from a variety of fields.

In 2015, he was named as one of MEDA’s 20-under-35 young professionals changing the world. He is a board member of Mennonite publisher MennoMedia.

“In my business, I have seen profound changes in how people work, where they work and how they connect with their audience,” he said. Working from a home office “before that was a thing,” he resisted the urge to lease office space in an effort to look bigger than his business was. He also decided early on that he wasn’t going to hire or fire anyone, preferring to take on contractors for specific projects as needed.

Feeling an undercurrent of his faith running through how he operated QT Web, Steingart recalled a discussion with Wally Regier, his childhood pastor and mentor. Regier told him that there are many ways to make a difference in the church, “and it doesn’t have to be from the pulpit.”

“He told me that he saw a role for me in the future, and that the church would need my gifts in different ways than I could imagine at the time.”

Steingart constantly felt drawn to work with churches and non-profits. Half of his work at any given time comes from that sector. With low overhead and no staff, he said he was free to take on the jobs he wanted, “working with clients that would be beneficial for growing my business, and theirs.”

The pandemic led his clients to pivot. Initial messaging evolved into making it easier for customers to find them and their things, then a building or growing phase that included website overhauls. “We can’t keep doing the things we did pre-2020 and think we’ll get the same results,” he said.

His prescription for digital storytelling in a post-COVID-19 world involves several principles:

• First, businesses and non-profits need to find their authentic voice or offering and tell an authentic story. “Many companies are still making their stories about themselves, versus how their clients can find success with the help of the company’s products and services.”

“We all have a story to tell, and it’s even more powerful when you make it a simple one,” he said.

• Automating messaging is his second recommendation. Stick to a plan, schedule posts, divide up tasks and create content with a view of reusing it in different online channels, he said.

Being brief is also important, he said. “Short attention spans are getting shorter.”

“If you haven’t already, trend towards shorter videos and 240-character blurbs—more bang for your buck,” he said. “Making a five-minute promotional video should always come with a plan to make three or four one-minute videos with that material.” Embracing new technology while staying focused is key, he said. “Whatever you do, make sure you do it right.”

• Steingart is also a fan of frugality. Organizations should hone in on expenses that can be avoided. Some web platforms charge a monthly fee for their e-commerce services. If an organization has a limited number of products, it may find it more economical to have its own platform built, he said.

• Adapting quickly is another important skill. “Don’t get bogged down in the ‘we’ve always done it this way’ mentality,” he said. He witnessed the need to pivot through his work on the board of MennoMedia.

The publisher doesn’t resemble the organization Steingart joined a decade ago. Facing the double-edged sword of a declining print industry, and a Mennonite church that continued to experience significant transition, plus pandemic impacts, MennoMedia has made many changes.

Quick decisions to move out of under-used buildings, closing warehouse space and re-evaluating staffing needs were all changes that needed to happen to reduce organizational bulk, he said.

All this occurred while increasing the number of books published each year, producing a new Mennonite hymnal and looking forward to a project that recognizes Anabaptism at 500 (in 2025).

The changes have made MennoMedia a sustainable business that will continue to serve the church for years to come, he said.

One of the most challenging parts of Steingart’s work is understanding threats, such as ransomware and other new “nefarious things that are going on.”

“There’s always new stuff that you think you got rid of, script on a website or something like that, and it pops up in an old way (so) that you know how to get rid of it,” he said.

Backing up websites with multiple copies is a good practice, he said. This allows organizations to isolate the place where an infection happened, and nothing is really lost.

As his own company grows, he hopes to equip his clients to manage and update their own sites. “For me, it’s far more advantageous to be building rather than managing.”

He is in the process of changing his company name and brand to Big Creative. This will reflect several realities. At six-foot-four he is a big person.

Steingart is also looking to move beyond web and graphic design, into photos, videos and other services. 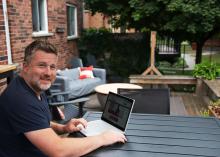 Chris Steingart’s graphic design journey began through creating a website for a church where he served as youth pastor. He is pictured working outside, enjoying the benefits of having a home office. (Photo courtesy of Chris Steingart) 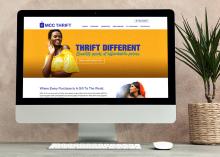 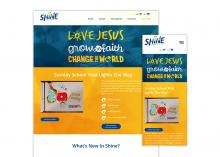