Barriers of internet access and recording quality, of jetlag and illness, of language and culture stand in the way of Mennonite World Conference (MWC) assemblies, but in Indonesia on July 5, they did not prevent God’s people from worshipping together. “This marks a new way of doing assembly, where we can learn and fellowship in satellite locations and gather online in groups and families around the world,” said Paulus Widjaja, right, an MWC national advisory council member. He cautioned against fear, calling it “a great enemy” that causes people to exclude others. Amid songs and dances representing Javanese culture, he presented outgoing MWC president J. Nelson Kraybill, left, with a gunungan, a fan that represents the world. “You come to us walking on the water through the storm,” Kraybill prayed, acknowledging the fears facing Assembly 17 participants. Jesus was the greatest barrier crosser, said evening speaker Tim Geddert, on the theme of following Jesus across barriers. Jesus’ interaction with the Syrophoenician woman in Mark 7 shows both Jesus’ divinity and humanity, he said. In every gospel passage, we should ask how we can learn from both, he said. “May we throw open the doors of our lives to the disruptive Holy Spirit,” prayed Lisa Carr-Pries, MWC’s vice president, in closing. 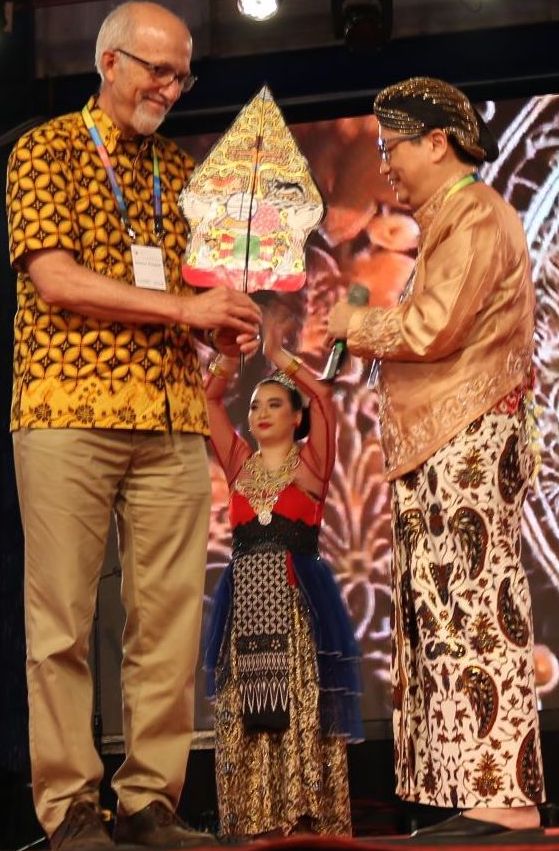 Paulus Widjaja presents J. Nelson Kraybill with a gunungan, a fan that represents the world, during the first day of Assembly 17 in Indonesia. (MWC Photo)