Writing in the dust 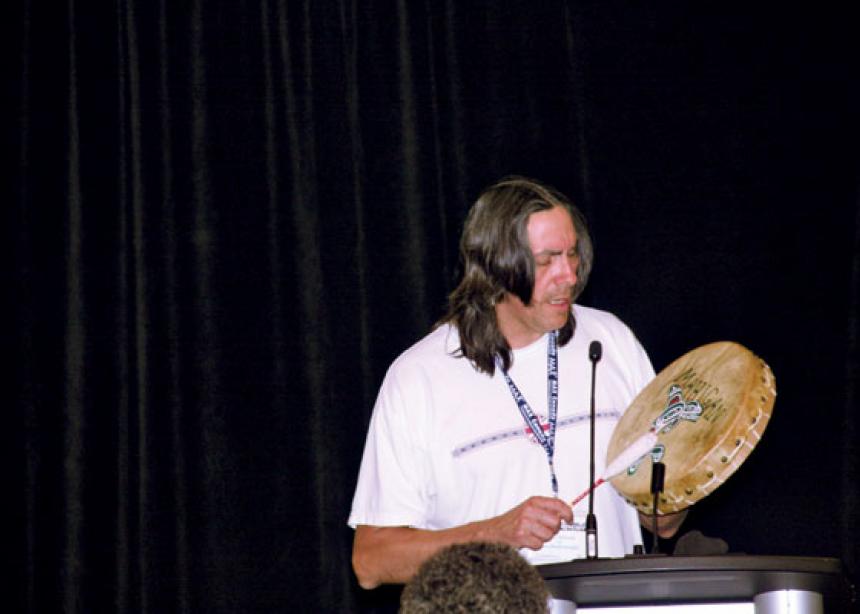 “Perhaps Jesus will reach out and write on the dusty covers of our Bibles: Read!” mused Yoder Neufeld, professor of Religious and Peace and Conflict Studies at Conrad Grebel University College, emphasizing the Assembly theme, “Dusting off the Bible for the 21st Century.”

While the theme seemed to have hit a sensitive spot with some, the suggestion that the Bibles in the homes of at least some Mennonites across Canada were unused would fit in with both statistical and circumstantial evidence gathered across North America and reported by Willard Metzger, executive director for Mennonite Church Canada.

More and more university teachers note that their students do not have the biblical background to understand classic Western literature, and surveys of students at Bible colleges show ignorance of basic biblical characters and stories. Taking Yoder Neufeld seriously, MC Canada delegates read and studied the Bible together for four days in July.

The focus of Being a Faithful Church this year, the fourth installment, was “Testing the spirits in the Midst of Hermeneutical Ferment: Using the Bible in Helpful and Unhelpful Way.” The previous three installments of BFC were (2009) the foundational document on Hermeneutical Ferment, (2010) Peace, and (2011) guidance on moving forward in discussions on sexuality. The use of terms like “hermeneutical” (the study of how we use and interpret documents and materials) was a frustration for some delegates.

One, making the hand flying over the head sign, spoke of not having the biblical or theological background to understand some of what was being said by speakers or in documents. Despite this, delegates spoke highly of the BFC 4 material. Friday afternoon they took part in a prayerful appreciative inquiry-like process listing affirmations, concerns and hopes about the material.

Arnold Neufeldt-Fast of the BFC task force, reported from a summary of the table discussions that: “your feedback gives strong support for the BFC process, especially the extent of involvement by scholars, congregations and individuals. The process has given space for many voices—BFC represents all of us and suggests a community of accountability.”

Table groups had used words like “comprehensive,” “thoughtful,” and “well rounded” to describe this year’s document. Particularly appreciated was the use of the extended metaphor of ditches and paths for biblical study. The document noted “twelve paths to stay on” and “six ditches to avoid” when engaging in Bible study and discussion. This image was suggested by one scholar that biblical interpretation “is like a communal hike.” Paths suggested by respondents last winter included the “life, teaching, death and resurrection of Jesus are central and serve as the critical lens of interpretation that helps us understand all of scripture” and “it is the Holy Spirit who guides the interpretive community in faithfulness.”

Ditches to avoid include disconnecting “Jesus from his own scriptural roots (the Hebrew Bible) and his own social/political context in first century Palestine. We need to avoid proof-texting” and “generalizations without having immersed ourselves in particular texts,” and “we live in a changing context, and our understandings are partial.”

Neufeldt-Fast also noted a concern that “the document in its present form is too scholarly and intimidating for non-theologians.” This ongoing refrain was responded to by Andrew Reesor-McDowell, outgoing moderator and Rudy Baergen, chair of the Faith and Life Committee. Both noted that the materials which congregations will be receiving this fall will use simpler language to make the BFC 4 material more accessible to average congregants.

Another repeated concern was that only 40 of MC Canada’s 225 congregations responded to the request for process this past winter. But Reesor-McDowell noted that such a response was a good cross section of the denomination. The General Board felt that the shortened format of the gathering, as well as the study focus brought a larger-than-expected response from across Canada, showing a good buy-in by congregations and individuals.

Neufeldt-Fast’s summary also included table groups’ hopes for the process. He reported that “we are hopeful about the journey we are on; momentum is building; it is an open, inter-generational return to scripture. We really believe God is at work in our collective discernment. We are talking and listening and processing intensely on this journey together, all the while loving and respecting each other. This will serve our unity in Christ. We really do have good handles to work with; we are rich with scholars and wise leaders.”

At the Saturday conclusion of the BFC 4 process for Assembly 2012, delegates accepted three resolutions (see page 7). Reesor-McDowell then drew attention to a recommended timetable for the ongoing BFC process. With the move to bi-annual assemblies, one delegate wondered how long members of Harmony, a Mennonite gay, lesbian, bi-sexual and transgender group, would have to wait for resolution of the sexuality questions. Leaders responded that while the process is taking time, there is a commitment to move to sexuality questions, albeit the same-sex relationships discussion is now slated for 2016.

In support of the theme, “Dusting off the Bible for the 21st century,” assembly planners engaged Gerald Gerbrandt, recently retired president and long-term teacher at Canadian Mennonite University, and CMU Associate Professor of New Testament Sheila Klassen-Wiebe to present and lead Bible studies in addition to Yoder Neufeld.

In his first presentation Gerbrandt focused on the image of the Bible as a play in many acts which is as yet unfinished. In the story of the people of God, actors have moved across the stage in the past. Ensuing acts have added their own creative touches under the guidance of the Holy Spirit. “So we see the Jews of the Exile moving beyond the story of the Exodus with its focus on the land of Palestine. We have Jesus moving beyond the Jews of the Exile and reconstruction, and we have the Christians of the New Testament moving beyond Judaism.”

Klassen-Wiebe, in a Bible study on the finding of the “Book of the law” in the temple in the time of Josiah (2 Kings 22-23), taught that many scholars believe the book found was Deuteronomy, probably written around that time, which then influenced the writing of Joshua, Judges, 1 and 2 Samuel, and 1 and 2 Kings during the Exile in Babylon.

In response to her own “so what? how does this apply to us today?” she concluded that we are left with unanswered questions about the cause and effect of sin and its consequences, about the uncertainty of the future, but that, like at that time, we are faced with idols which claim our allegiance—idols of security and finances. She also noted that the 2 Kings text calls the church into corporate interpretation and application of the Bible.

Many of the workshops also focused on Bible interpretation. The workshop, “And the Lord smote them: problem texts in the Old Testament,” led by new Associated Mennonite Biblical Seminary professor of Old Testament Safwat Marzouk, looked at the conquest of Palestine under Joshua. He showed a quote from a stele by a Moabite king of the same time, in which he “annihilated” a Jewish city, under the command from his God, Chemosh, eerily echoing Old Testament texts. Mazouk noted the “anthropological nature” of the Bible—it is a book written by humans in specific times and cultures—incorporating as God’s word common assumptions of the time.

Other workshops included, “The Bible: A place for women?” led by Christina Reimer, lecturer at St. Jerome’s University at U of Waterloo, and “Exploring diverse voices in Scripture on the theme of wealth and poverty,” led by Lydia Neufeld Harder, pastor at Hagerman Mennonite Church, north of Toronto.

In the workshop, “What about the hard texts? Is the Bible a children’s book,” led by Rodney Wiebe, adjunct professor at Columbia Bible College, participants favoured teaching scripture selectively, recognizing children’s cognitive abilities and stages of development. This will help them to think about what a disciple of Jesus looks like, as opposed to teaching everything in the Bible in an unfiltered manner, avoiding difficult passages, or editing the Bible for children. A repeated refrain from both presenters and participants was that the workshops did not answer all the questions.

The assembly also included scripture in the worship times with songs about scripture, and effective dramatic presentations of scripture. Videos of humourist Ted Swartz’ take on Biblical stories, an art gallery of works with references to specific scriptures and a workshop which took assembly goers out on the streets of Vancouver to hear scripture texts in new contexts helped assembly goers appreciate scripture.

Assembly goers were also invited to hear the story of a “Residential School Healing Pole” and to participate in carving the pole (see back page). On Friday evening the assembly moved to Peace Mennonite Church for a barbecue and evening of multicultural music, dance and humour. Late night activities for young adults included a beach party.

Hallways and tables were full of discussions, catching up with family and friends, making new connections, and exchanging congregational stories. Final answers on many questions seemed unattainable, but a spirit of “we’re in this together as followers of Jesus Christ” permeated the four days.

As Sharon Schultz, pastor of Eyebrow Mennonite Church in Saskatchewan put it, “At first I felt threatened [by those who held to liberal scriptural interpretation] but as I got to know those who held such views, I began to see that they too were trying to follow Jesus.”