The world comes to the farm 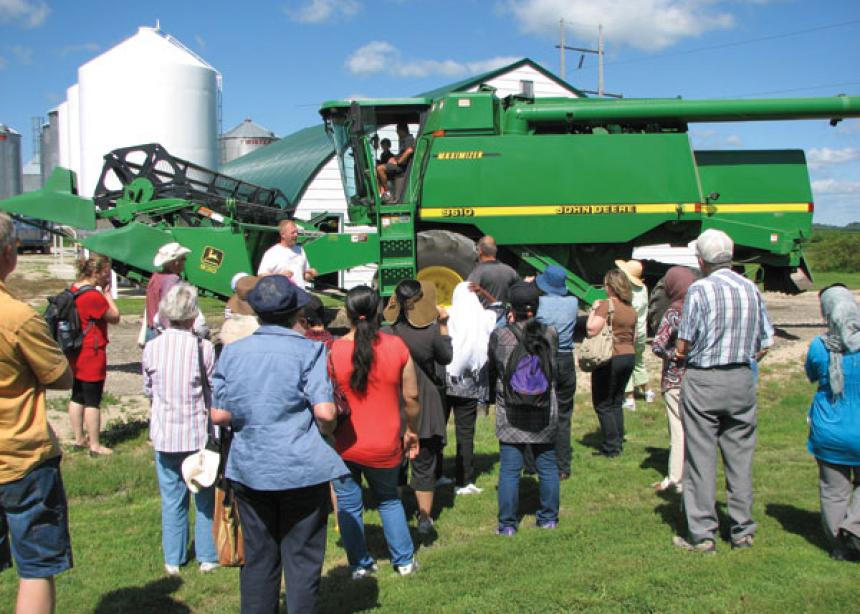 Most often people think of crops from our prairie farms going abroad to feed the world. So it was a bit of a shift on June 15, when 20 women and 15 children representing 10 different countries of the world boarded a school bus in Winnipeg to visit one of these farms in Springstein.

The group consisted of an English-as-an-additional-language class that meets together four mornings a week at Bethel Mennonite Church, Winnipeg. On this particular outing, the “world citizens” came from Argentina, Israel, Egypt, Somalia, Eritrea, Iran, Afghanistan, India, South Korea, China and Russia. They were accompanied by two teachers, six volunteers and three child-minders. The field trip was organized by Reynold Friesen, associate pastor/community minister at Bethel Mennonite.

The farm visited was 4-D Farms, which is owned and operated by Gerald and Susan Dyck and their son Eric and his wife Sandra. As the third and fourth generations of Dycks on this land, they have expanded the 100-hectare farm tenfold, and diversified to include mixed grains, forage crops, leaf cutter bees, laying hens and a few broilers. This was no virtual tour, but a hands-on encounter with the sights, sounds and smells of a real farm. For most, it was a first-time experience.

The students readily entered the chicken barn to see the hens up close, to pick up an egg or two, and to hear the sound of the automated feeders. In the shop, they passed around plastic bags of grain samples and even cocoons of bees. Eric was faced with the challenge of explaining—in the most basic English words—the workings of an air seeder and sprayer. The shiny, green combine proved to be the perfect backdrop for numerous group pictures, while the most adventurous climbed up into the cab for a better view and more pictures. Walking into a field to survey a crop of oats and to gaze toward the distant horizon probably came as close as possible to capturing the pulse of the farming experience.

Gerald said he was so pleased for this opportunity to share about farming, identifying with the guests while briefly recounting how his ancestors had been newcomers to this country, too. He made a point of telling this group of women that, at 4-D Farms, the women are by far the best at operating the combines at harvest time!

After gathering up the children from the play structure, some of whom were reluctant to leave, the group was served a delicious lunch at Springstein Mennonite Church. Following the meal, Friesen presented a brief overview of “Who are the Mennonites?” which raised interesting questions and comments. 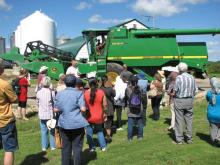