Why and how we should evangelize

The Ethics of Evangelism: A Philosophical Defense of Proselytizing and Persuasion. 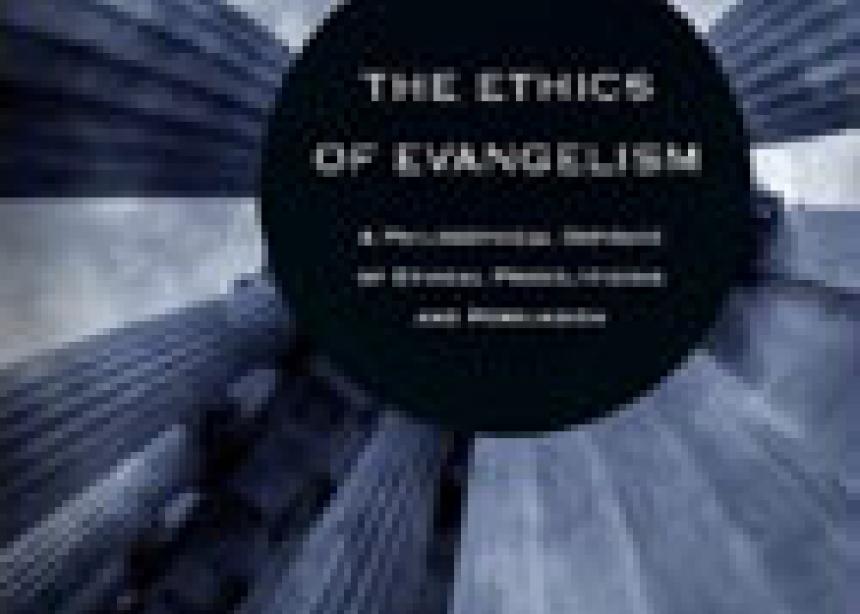 With the celebration of the missionary efforts that led to the creation of the Mennonite Community in Congo a century ago (Sept. 3, page 4), now is perhaps a good time to review Elmer John Thiessen’s latest book, The Ethics of Evangelism.

As the title suggests, Thiessen, a research professor of education at Toronto’s Tyndale University College and Seminary, sets out to disprove a 2009 online statement: “. . . I am tired of evangelical people going around the world forcing their religion on people. It’s just not right.”

Thiessen’s response is that evangelism—or proselytizing (he uses the words interchangeably)—is right when done properly. And since this is an academic book, he begins with a formal definition of his subject: “The deliberate attempt of a person or organization, through communication, to bring about the conversion of another person or group of persons, where conversion is understood to involve a change of a person’s belief, behaviour, identity and belonging.”

While this is first and foremost an ethical treatise on evangelism, Thiessen does acknowledge the religious underpinnings provided by Christianity, Judaism and Islam. “Evangelism and mission is at the heart of Christianity,” he writes, quoting Emil Brunner’s aphorism, “‘The church exists by mission as a fire exists by burning,’” followed by Christ’s Great Commission (Matthew 28:18-20). He rightly notes that, “[f]or many Christians, this is all that needs to be said about the importance of evangelism—it is mandated by Jesus.”

But just because evangelism is mandated by Jesus—or Mohammed—doesn’t make all attempts ethical, Thiessen acknowledges. However, he claims that many are, despite a variety of ethical and sociological objections to the contrary. In Part 2, he responds by deconstructing, debunking or downplaying a number of these objections. His biggest criticism of these objections, such as claims of arrogance on the part of evangelists or that their efforts impinge on the freedom or rights of individuals or societies, is that they overstep the empirical evidence. “Vagueness” is a term he often uses.

As to the charge of intolerance when it comes to evangelism, Thiessen writes that “the key problem with this objection . . . is that it rests on some misconceptions about the nature of tolerance.” He briefly charts the changes from tolerance being seen as a vice (Aristotle and St. Thomas Aquinas), to becoming a virtue during the Enlightenment; and from being related primarily to people, but not necessarily their ideas, to encompassing both.

“It has been said that error has no rights, but people do. That is why we endure or put up with ideas and practices and institutions that we do not like,” he writes, but laments that, “[today] this is condescendingly spoken of as ‘mere’ tolerance, and it is not seen as good enough. Today, a further demand is made of the tolerant person, namely the requirement of fully accepting and even agreeing with what is different.” (See “Dismayed with church’s LGBT statement” letter, Sept. 3, page 10, for an example of this type of reasoning.)

In Part III, Thiessen provides a “Positive Approach to Proselytizing,” in order to show that evangelism is “in general a good thing.” He cites John Stuart Mill’s classic defence of liberty, as well contemporary liberal arguments by the likes of John Rawls and Jeff Spinner-Halev, the latter of whom believes, according to Thiessen, that “a genuine liberalism allows religious language in the public square. A genuine liberalism will therefore also welcome religious proselytizing in the public square.”

In the final third book Thiessen sets out detailed guidelines to distinguish between ethical and unethical proselytizing. Those who see evangelism as mandated by Jesus can easily skip the intervening chapters and get right to these “practical” ethics. And for those with a really short attention span, he provides a 15-point summary of his criteria to distinguish between the two forms.

From his perspective, ethical evangelism:

In conclusion, Thiessen quotes Aristotle on the art of persuasion: “A man can confer the greatest of benefits by a right use of these, and inflict the greatest of injuries by using them wrongly.” May those who heed Christ’s Great Commission take these words—and the advice provided in The Ethics of Evangelism—to heart.

I would like to take issue with the very foundation of christian evangelism, the so-called "Great Commission." There are reasons to doubt its authenticity altogether. Many modern NT scholars just don't believe Jesus said it. First, any sayings attributed to the post-crucifixion Jesus must be called into question, for obvious reasons. Second, the worldwide scope of the "Great Commission" is contradicted by Jesus's instructions to the apostles in Matthew 10. Third, if Jesus really told his disciples to make followers of all peoples, then the debate between Paul and James (over whether or not uncircumcised Gentiles can be included) makes little sense. Why didn't Paul just quote the "Great Commission" to James and end the debate right there? Likely because that particular saying of Jesus hadn't been formulated yet. The language of the "Great Commission" certainly sounds more like the post-70 C.E. church talking than the pre-30 C.E. Jesus.

Charlie, where to begin?! You suggest that your opinion is founded on the beliefs (nevermind the work) of 'many modern NT scholars". Which scholars? First of all, you declare that any sayings attributed to the post-crucifixion Jesus must be called into question for 'obvious reasons'. It would help me to understand you better if you spelled some of those out for us.

Secondly, you suggest that Matthew 10 contradicts the Great Commission. This is only true if you throw out the concept we call 'time'. It is entirely feasible that Jesus sent out his disciples on a limited mission (to the Jews) EARLY ON and then broadened the scope of their mission to include all nations (the Gentiles) LATER ON. There are plenty of good reasons why he might of done so, not least of which is that the promise/covenant God made with Israel was that ALL NATIONS would receive blessing through Israel, including the predictions of the prophets that all nations would come to Zion to learn the ways of God.

Thirdly, you suggest that the debate about Gentiles between James and Paul makes little sense if the Great Commission had, in fact, been commanded by Jesus after the resurrection. This is also not necessarily true. The debate between James and Paul was not whether the Gentiles would be included in God's blessings/the Kingdom. All of Judaism proclaims that the Gentiles are part of God's covenant purposes. The debate between Paul and James was about a much more detailed matter: namely, in what precise way would the Gentiles be included into God's Kingdom/Covenant? Would they first have to become Jewish proselytes (obey OT laws, receive circumcision), as argued by the Judaizers in Paul's time; or would God welcome the Gentiles in "as is", without them having to become Jews. The decision made at the council of Jerusalem was that God had already taken His stand with the Gentiles by pouring out the Holy Spirit onto them. Both the "James" perspective and Paul's mission are workable options within the scope of the Great Commission, and so their debate is not at all a clear indication that the Great Commission had not been given in the time of this debate.

Finally, you suggest that the "language of the Great Commission" sounds more like the post-70 C.E. church than it does the pre-C.E. Jesus. This is an unbelievably loaded statement that requires serious unpacking. One thing to remember is that the Church post-70 C.E. is under serious persecution by pretty much everyone around them, whereas the earliest Church we read about in Acts seems to have been doing the Great Commission, with persecution only from select Jewish leadership. Why would a later heavily persecuted Church suddenly (just for fun???) invent the formulation of the Great Commission? Wouldn't it make much more sense for a severly persecuted bunch to keep it on the down-low? What were the first things that the disciples (like Peter) did? They proclaimed the gospel and it very quickly took off among the Gentiles through Paul and Peter's ministry by the power of the Spirit. This is very early on. Moreover, could it not be the case that the reason Jesus didn't broaden his ministry scope to include Gentiles (although in many ways he actually did) was because he, first of all, came as the Jewish Messiah, to the Jews first, and then to the Gentiles? It is a matter of priority rather than a matter of one or the other. And could it not be that the door was opened to the Gentiles precisely because His own rejected him?

I know this has been a long rant, but your suggestions, Charlie, betray a fundamental lack of understanding of the gospel and of some of the basic history of the early Church and New Testament texts.

Marco, thanks for taking the time to reply to my comment. For people like me, who considers himself a Jesus person but who doesn't believe Jesus physically came back to life after his execution, I have little choice but to dismiss statements attributed to Jesus after he was dead. This view would be shared by all scholars who do not believe in the literal physical resurrection of Jesus. And that's a lot of scholars.

As for your perspective on Matthew 10, what you say can make sense if you want to put that particular spin on the text. But it is an interpretation of the text, one which must be imposed on it in order to support your evangelical world-view. Since I am not an evangelical, I have no interest in harmonizing the "Great Commission" with Matthew 10. To me they are simply contradictory, and I let them stand as such. Personally, I don't think Jesus uttered either saying. I think Matthew 10 is a product of the Q community (the Galilean followers of Jesus from the 50s-60s C.E.) and the "Great Commission" is a product of the Gentile church of the 70s-80s which needed a statement from Jesus that would justify their outreach activities.

As for the debate between Paul and James, which of those two factions knew Jesus best? Paul never met Jesus, didn't seem to know any of Jesus's sayings. On the other hand, James and his group were those who had walked and talked with Jesus. If they didn't understand that Jesus wanted everybody to become disciples without having to adopt certain Jewish practices first, then it's difficult (in my opinion) to make a case that that's what Jesus wanted. I don't think Jesus had enough time, during his short ministry, to think about the consequences of his mission beyond the confines of his Jewish community.

Thanks for the dialogue. I do lack much understanding of the gospel as it is propagated by the church, because so much of it is confusing and irrational to me. And I believe God gave us rational capabilities to put to use to understand the world and reality.