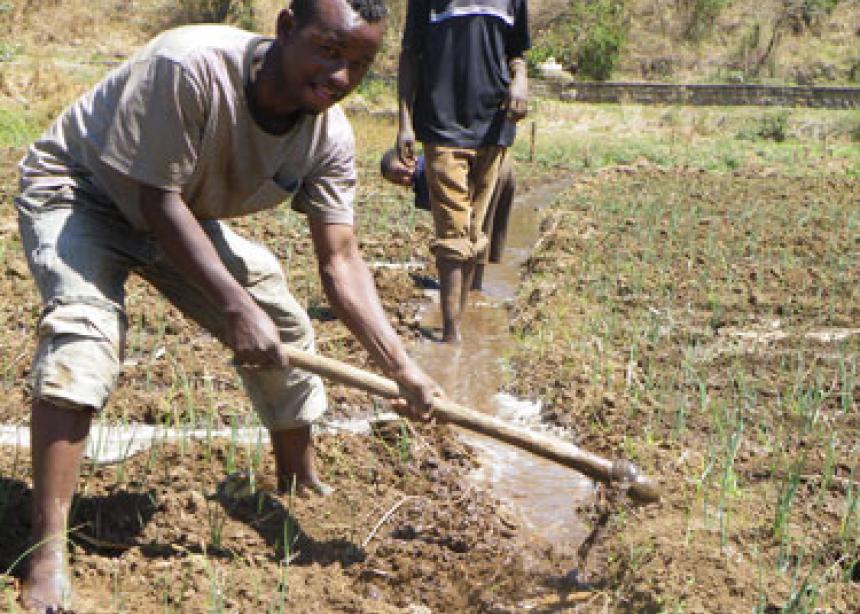 Two Ethiopian men work on a river-diversion project that uses a gravity-fed system to irrigate their crops and that permits more than one growing season per year.

The invitation arrived last September: “Would you like to accompany the Canadian Foodgrains Bank on a media study tour of Ethiopia?”

It sounded like an eye-opening opportunity to see an organization follow through on its mandate to combat global hunger. Our trip was planned so that we would get a chance to see what aid work looks like, meet aid workers in the field and hear from recipients themselves.

We met Bakelach Basa in the village of Dana. The mother of six children was a participant in a goat-lending program administered by Ethiopian Kale Heywet Church Development, an evangelical Ethiopian church organization supported by the Evangelical Missionary Church of Canada.

Program participants receive a female goat and then return its first-born to the program. In the five years since Basa received her goat, she has established a herd of five goats and a pregnant heifer. She has been able to enrol her children in school, and is now saving money to purchase a sheet-metal roof for her home.

Local aid workers who administer the program told us that since launching the goat-lending campaign five years ago, the number of goats involved has climbed to well over 300.

Farming God’s Way was an immediate attention grabber, and seemed a perfect fit to deal with the climate and environmental challenges faced by Ethiopian farmers. The practice, which primarily involves zero tillage cultivation, is also becoming more widespread in Tanzania and Kenya.

Joseph, who hosted us and is also a pastor in the local Kale Heywet church, proudly showed us his test plot of harvested maize, which was about to be planted with beans. The initial yield was more than twice the usual results of area fields. It was a visible reminder that, although the technology and land base are dramatically different, farmers in all areas of the world can be connected with a common interest of yield improvement and care of God’s creation.

We met Desta Dadarca while touring a food-for-work relief project administered by the Terepezza Development Association, which is the relief and development department of the Wolayata Kale Heywet Church, a partner of World Relief Canada. The project became necessary due to a three-month gap in expected rainfall; at the time of our visit it was assisting 23 villages with 300 tonnes of maize, with each participant receiving 75 kilograms of maize per month.

Dadarca, a 35-year-old farmer, was one of those successful applicants. He and his wife have six children. When the rains fall, his primary crops include maize, sweet potatoes and a plant called inset (“false banana”). His goal is to save enough from the proceeds of his half-hectare plot to purchase a share in an ox, in order to provide milk for his children.

Our “beacon of hope” moment occurred when Dadarca spoke with inspiration about his commitment to the church, complete with a song. When asked about his children, he replied, “Thanks be to God, they are healthy.”

Although the Foodgrains Bank partners primarily with rural development and agricultural initiatives, its work with Food for the Hungry Ethiopia in Ziway is worthy of recognition. Project manager Samson Kacha told us how the Orphan and Vulnerable Children Project is active in five communities. It supports 1,500 orphans by providing education, food, tuition and social support.

We were “smitten” by Mohammed and Daniel, brothers in an orphan-headed household, who shyly showed us their neat homework assignments and talked about their desire to attain marks high enough to qualify for university education. 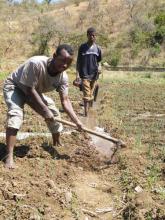 Two Ethiopian men work on a river-diversion project that uses a gravity-fed system to irrigate their crops and that permits more than one growing season per year.