Science project explores the future of biofuel, turns to crowdfunding for support 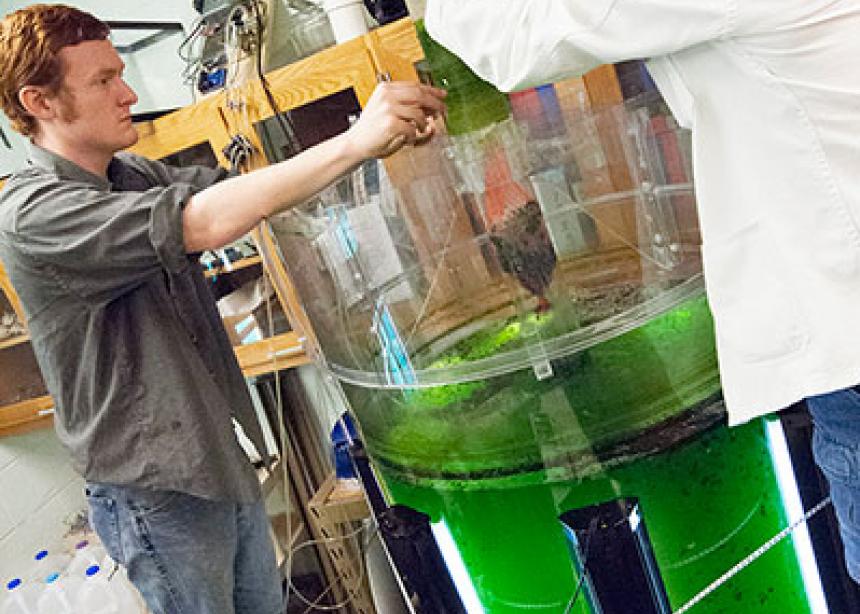 Aaron Kauffman, a senior at Goshen College, left, and Stan Grove, professor emeritus of biology at the college, remove a polypropylene mat that is used to harvest algae grown in the photo-bioreactor.

The glowing green tanks on the second floor of the Goshen College Science Hall look like something from a sci-fi movie.

It seems fitting, as the clear plastic tanks called photo-bioreactors, could be the future of how biofuel is produced. The three tanks, each with large fluorescent lights strapped to the outside to encourage photosynthesis, are alive with 700 litres of green algae-filled water.

The project, known as AlgaeTown, was conceptualized four years ago by Stan Grove, professor emeritus of biology, and Dave Slagel, the chief executive officer of Formco Inc. in Elkhart, Ind. It was an effort to find an easy and efficient way to produce algae, which can be harvested for use in biofuels, pharmaceuticals and even food. For years, algae has been rumoured to be the fix for many global energy problems.

“Society is looking at biomass of all kinds as sources of fuel or food,” Grove says. “What we need is to have tonnes of algae so that companies can extract the oils and make biofuels or biodiesel.”

The problem is that no one has been able to effectively grow and harvest a large enough biomass of algae for it to compete with other crops. Companies and universities have tried filters and centrifuges, but these often require more energy to operate than the algae produces.

But the AlgaeTown team believes it is getting closer to a solution.

“The harvest method that we are using, as far as we know, no one else had ever done things quite like this,” Slagel says. “The filters that we’re using are actually a fairly advanced extrusion technique. We have growth going on and harvest going on at the same time.”

The algae is harvested by hand by carefully removing a collection of polypropylene mats that the algae adheres to. This method consumes no energy and has resulted in harvests that are 30 times more concentrated than the algae circulating in the tanks. The team believes that this method can alleviate one of the major hurdles to profitable commercial algae production.

Another problem is funding. Until now, the Goshen College science department and Formco Inc. have supported the project financially. Now that they have met with some success, the team is looking for more funding to help with the increasing costs of testing and development. They have applied for grants, but they are also turning to the public for support.

A crowd-based funding contest in Popular Science Magazine earlier this year got the attention of Aaron Kauffman, a senior molecular biology/biochemistry major from Goshen. With the help of Natasha Weisenbeck, a senior public relations major from Clifton, Ill., and the rest of the AlgaeTown team, they submitted their proposal to raise money through crowdfunding.

They weren’t among the 24 finalists, but that didn’t discourage the team. With a plan already in place, they launched a month-long campaign in September to raise $18,700.

The money that is raised will go toward equipment, supplies and student work-study time. The hope is that with more dedicated equipment and students able to work on this project, the AlgaeTown team will come up with a commercially viable process for growing and harvesting algae. From there, the possibilities flourish.

Current biofuels, such as ethanol, are made from corn and other crops. With algae, it’s the same idea as growing corn or soybeans, except that growing algae consumes fewer resources and less energy while producing much higher yields than field crops. Studies show that some strains of algae can convert up to 60 percent of their biomass into oil, while that number is less than 10 percent for corn.

Aaron Kauffman, a senior at Goshen College, left, and Stan Grove, professor emeritus of biology at the college, remove a polypropylene mat that is used to harvest algae grown in the photo-bioreactor.

Dried algae that was grown by the AlgaeTown team. The dried algae contains oils and other materials that can be extracted for biofuels, pharmaceuticals and even food products. 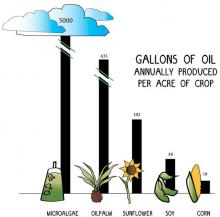