Winnipeg Mennonites follow their drinking water to its source 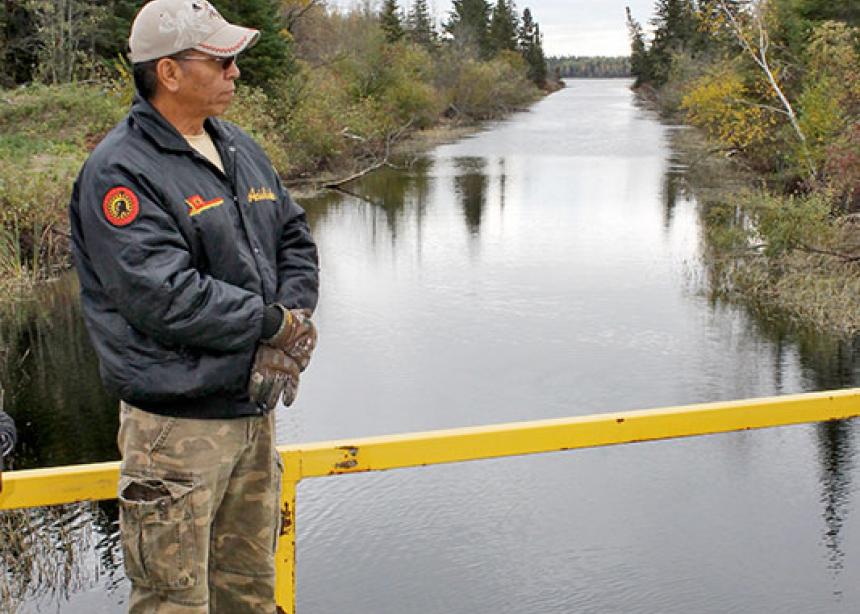 Daryl Redsky of the Shoal Lake 40 First Nation stands on a temporary bridge over the man-made channel that isolates his community. (Photo by Will Braun)

When Mennonites in Winnipeg baptize a believer, they do so with water from Shoal Lake. The baptismal water comes from a project for which the members of Shoal Lake 40 First Nation were involuntarily moved. It comes from a place where local residents have lived under a boil-water advisory for 17 years.

On Oct. 9, 2014, five carloads of concerned Winnipeg citizens—including two Mennonite Church Canada representatives—travelled 160 kilometres eastward to the other end of the aqueduct that has supplied Winnipeg's water since 1919. There, Chief Erwin Redsky and other community members shared their story.

The community of Shoal Lake 40 First Nation, on the Manitoba-Ontario border, happened to be right where Winnipeg wanted to draw its drinking water a century ago. So Ottawa confiscated reserve land and moved the community to a peninsula elsewhere on the reserve. Then a canal was built at the base of the peninsula as part of a project to divert water from Falcon Lake, a popular cottage area, that used to flow into Shoal Lake near the aqueduct intake. That turned the peninsula to which the people had been moved into a man-made island, further isolating them.

No replacement lands or compensation money have ever been offered.

Although you can hear traffic from Highway 1 on a calm day in the community, today Shoal Lake 40 is the only reserve south of the Trans-Canada Highway without all-weather road access. In summer, members use a small ferry and in winter an ice road. But during freeze-up and ice break-up periods, they are stranded, sometimes forced to cross thin ice to get necessary supplies or to seek urgent medical attention. Over the years, several community members have died as a result.

In addition to isolation, 17 years ago authorities deemed their water unfit to drink without treatment. Eventually, Ottawa agreed to construct a water treatment plant, but backed out before it was built. Now, the first nation spends about $240,000 annually to supply bottled water to the roughly 275 community members.

During the opening weekend for the Canadian Museum of Human Rights in Winnipeg in September, Shoal Lake people camped for four days outside the museum. The $350-million museum features reflection pools and uses water as a "healing" element—water that is obtained at the expense of their rights.

"When we look into those pools," Redsky wrote in an online article for the Globe and Mail, "we will see a century of sorrow. We will see what we lack." The chief called the museum a "towering monument to hypocrisy."

Shoal Lake 40 has opened its own museum—the Museum for Canadian Human Rights Violations. The “living museum” includes exhibits in the lobby of the community arena and a community tour. In addition to the group that visited on Oct. 9, other visitors to the museum have included environmental advocate David Suzuki, reporters, and representatives of Amnesty International and the Council of Canadians. Mennonite Central Committee Manitoba is planning to take a vanload of people to the museum this fall.

In July, staff of the Winnipeg museum also visited the Shoal Lake museum. One staffer said publicly that the community faces “a whole cascade of human rights issues.”

Winnipeg museum staff granted permission for the Shoal Lake encampment during its opening and provided some firewood and food. A few Manitoba Mennonites also contributed firewood.

The first nation is in talks with Manitoba, Ottawa and the City of Winnipeg regarding construction of an all-weather road. A spokesperson for the provincial cabinet told Canadian Mennonite that "the three levels of government have agreed to split the cost of building an all-weather road, with each government paying one-third of the cost." Detailed design of the road is to begin later this year.

The office of Bernard Valcourt, federal aboriginal affairs minister, said his department has “committed funding to support one-third of the design costs and . . . will continue to work with the first nation to seek other potential government and private funding sources for the construction of the road.”

As for a water treatment plant, the minister's office said in an e-mail, “We will continue to work with Shoal Lake 40 . . . so that the construction of a water-treatment plant can move forward.”

The people of Shoal Lake have heard promises before, and are asking Winnipeggers to help make sure these commitments turn into reality.

Following the visit, Steve Heinrichs, director of indigenous relations for MC Canada, said, "Winnipeggers need to know where their water comes from. Visit the community, thank them, and then raise a loving stink to make sure the situation is addressed."

A brief Mennonite Church Canada video about the visit is available at http://www.mennonitechurch.ca/tiny/2440.

Daryl Redsky of the Shoal Lake 40 First Nation stands on a temporary bridge over the man-made channel that isolates his community. (Photo by Will Braun) 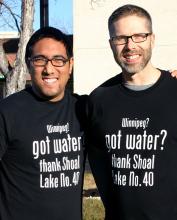