"War marches right through the center of everything — through house, hearth and field — ripping a hole into the center of things that can never be entirely repaired." 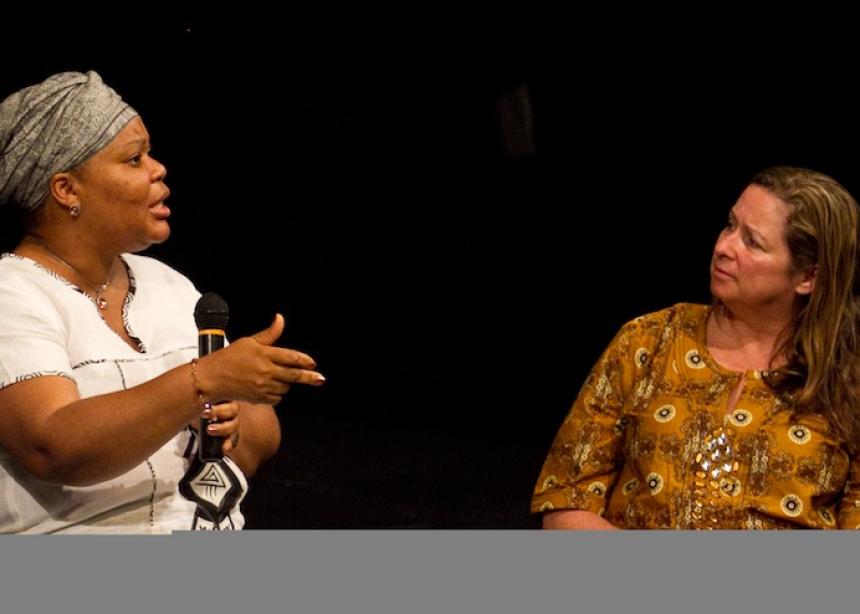 Filmmaker Abigail Disney says she learned “to look at war through women’s eyes,” as a result of visiting Liberia in 2006 and meeting Leymah Gbowee, who now holds a masters in conflict transformation from Eastern Mennonite University (EMU).

Gbowee was one of the leaders of a women’s movement that was instrumental in ending Liberia’s 14-year-long civil war in 2003.

Gbowee inspired Disney, the daughter and granddaughter of two leaders of the Walt Disney Company, to produce her first film project, “Pray the Devil Back to Hell.” The 2008 award-winning documentary shows the way Liberian women forced their warring men to arrive at a peace settlement that led to the election of Africa’s first woman president, Ellen Johnson Sirleaf, in 2005.

In a June 10 forum sponsored by EMU’s Center for Justice and Peacebuilding (CJP), Disney explained her motivations in being one of the executive producers of “Women, War & Peace.” This new documentary — to be aired on PBS over five successive Tuesdays at 10 p.m., beginning Oct. 11 — features women peacebuilders in Afghanistan, Bosnia, Colombia, and Liberia.

“War has never been a tidy, closed activity, taking place on a clearly demarcated battlefield between two uniformed entities, or when it has, that has been the exception,” Disney wrote on the “Wide Angle” PBS website and reiterated at EMU. “Rather, war marches right through the center of everything — through house, hearth and field — ripping a hole into the center of things that can never be entirely repaired.

“To bring a woman’s eyes to the telling of the story of war — to turn the camera around and place it in her hands — is to fundamentally alter the way war looks and sounds and smells,” she added.

After showing a trailer of “Women, War & Peace” to the audience of about 60, Disney moderated a discussion by three women: Gbowee; Dekha Ibrahim Abdi, a Kenyan-Muslim woman of Somali ethnic origin who received the 2007 Right Livelihood Prize (alternative Nobel Prize); and Koila Costello-Olsson, another MA graduate of CJP and the director of the Pacific Centre for Peacebuilding.

“I found the [Disney] preview to be harshly realistic, yet optimistic,” said Janice Jenner, director of CJP’s Practice and Training Institute. “The film series apparently doesn’t gloss over the ravages of war, but it won’t leave the viewer feeling helpless and hopeless, because it also focuses on the many women showing courage, resiliency and determination to change the war paradigm.”

Abdi spoke about war strategies that include systematic raping of women and rendering them homeless, as means of destabilizing a society. She has worked with African women, however, who have learned to use resistance techniques to the waging of war, such as refusing to cook food for the warriors. They have also used intermediaries, such as elderly women as negotiators and catalysts to reduce violent conflict in their regions.

Abdi also offered some ways that women in her region are able to anticipate conflict and thus to activate their networks to try to prevent it. One of the signs of budding armed warfare is an increase in domestic violence by the men. Another is seeing giraffes suddenly show up in a town, a sign that they have been spooked by the young armed men roaming the countryside.

Abigail Disney was one of 20 participants in a three-conference that began June 9 at EMU. It grouped female peace workers from nine countries to learn from each other’s experiences and to explore the potential value of an educational program tailored to women peacebuilders.

“In collaboration with CJP graduates and partners, we wanted to explore whether future women peacebuilders would benefit from a program focused on the distinctive needs, skills and strengths of women,” said CJP executive director Lynn Roth.

Some women at the consultation had spent decades living and working in conflict regions of the world, such as the Kenya-Somalia border region, Liberia, Pakistan, Afghanistan, and Eastern Europe.

The consultation took place toward the end of CJP’s annual Summer Peacebuilding Institute, from May 9 to June 17, 2011.