A wall of memories 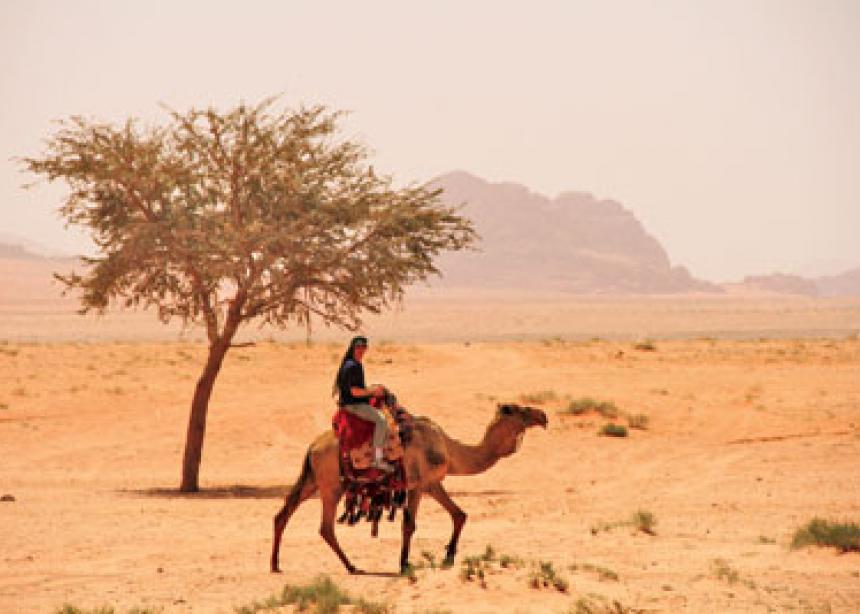 • We remembered Damascus—singing songs in the acoustic chambers of the Turkish baths and speaking to niqab-hidden women in the Umayyad Mosque.

• We recalled Lebanon—dancing the dabke with the friendly neighbours, playing basketball with students at the Schneller Schule and driving through the dizzying traffic as we descended into Beirut.

• We thought of Petra and the Wadi Rum—glimpsing the magnificent monastery at the end of al siq (the main entrance to the ancient city of Petra), sleeping under the stars in the middle of the desert and proudly waving on the top of the rock bridge.

We also reflected on our time in Israel/Palestine, trying to understand the reality of the Israeli occupation. We saw the occupation from three angles.

First, we listened to Angela from the Israeli Commission Against House Demolitions. As an Israeli citizen, she told us she could no longer accept the reasons her government was giving for the occupation, nor could she support the building of more Israeli settlements or the demolition of Palestinian homes.

Second, we listened to a representative from the Alternative Travel Group. As a Palestinian Christian, he explained how his hometown of Bethlehem has been changed by settlement building and the “security barrier.” It was sobering to walk along the snake-like wall, reading the graffiti and seeing the many homes surrounded and separated from each other.

Third, we listened to a member of Christian Peacemaker Teams in Hebron. It was a unique experience, sitting together on a rooftop hearing about military and settler activity in the region, with Israeli soldiers staring at us from a rooftop next door while other soldiers patrolled the streets below.

Now we just have memories. Some of us are still waking up from dreams in which we are wandering in the souqs (commercial districts) of Jerusalem or Damascus. Many of us still smile when we think of camel rides or desert walks. And all of us have a new outlook on the Middle East: its religions, its politics, its people.

As we were in the midst of sharing on the last night, the evening call to prayer began to sound through the walls of the convent. We stopped talking and listened quietly to the harmonious sound, each of us wondering when we would be privileged to hear such a sound again. Some of us bought “mosque” alarm clocks . . . but I don’t think they will live up to the real thing.