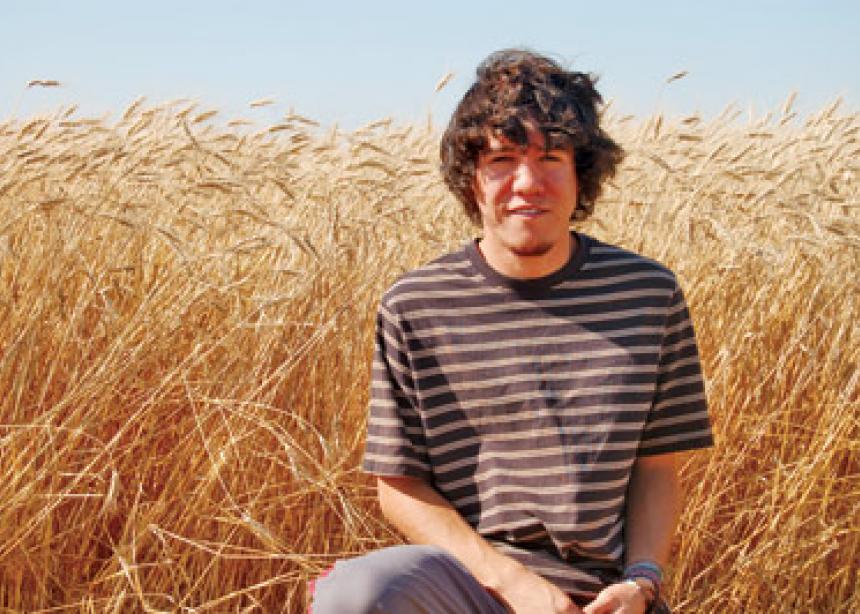 Juan Raul Junay of Guatemala City, Guatemala, poses for a photograph in a field of golden Manitoba wheat.

“Mines give people jobs, but there is long-term environmental destruction,” explains Junay, who is from Guatemala City but has been working at the Canadian Foodgrains Bank in Winnipeg since last August as part of Mennonite Central Committee’s International Volunteer Exchange Program (IVEP).

As one of the speakers in Foodgrains Bank’s People-to-People program, Junay has spoken at more than 60 public gatherings in Manitoba, Saskatchewan, Alberta, Ontario, New Brunswick and Prince Edward Island.

Junay is one of 58 young people from 23 countries participating in the IVEP program this year. He is returning to Guatemala this month with treasured memories of farming communities in Canada. A month after starting his placement, he participated in the harvest of a Foodgrains Bank community growing project in Niverville, a short drive southeast of Winnipeg. “It was the first time I saw such large combines and so many combines on one field,” he says.

Other treasured memories include seeing bison farms, an elk, frozen rivers, snow and the wide open spaces of the Canadian Prairies.

Junay says he will return to Guatemala with vivid memories of his overnight visit to the small southwestern Manitoba town of Strathclair in early February—his first road trip on icy and snow-covered roads. “It was the first time I saw houses so far apart,” he exclaims.

When they reached Strathclair, he experienced the warmth of small-town hospitality and the serene silence of a winter’s night in a rural community. “Strathclair is only three hours from Winnipeg, but it is so different,” he says. “I knew I would remember this forever.”

Juan Raul Junay of Guatemala City, Guatemala, poses for a photograph in a field of golden Manitoba wheat.