Vietnamese Mennonites read the Bible in a year

‘I read it, and I’ll read it over and over again,’ says one young member of Edmonton Vietnamese Mennonite Church

January 29, 2014 | God at work in the Church
By Donita Wiebe-Neufeld | Alberta Correspondent 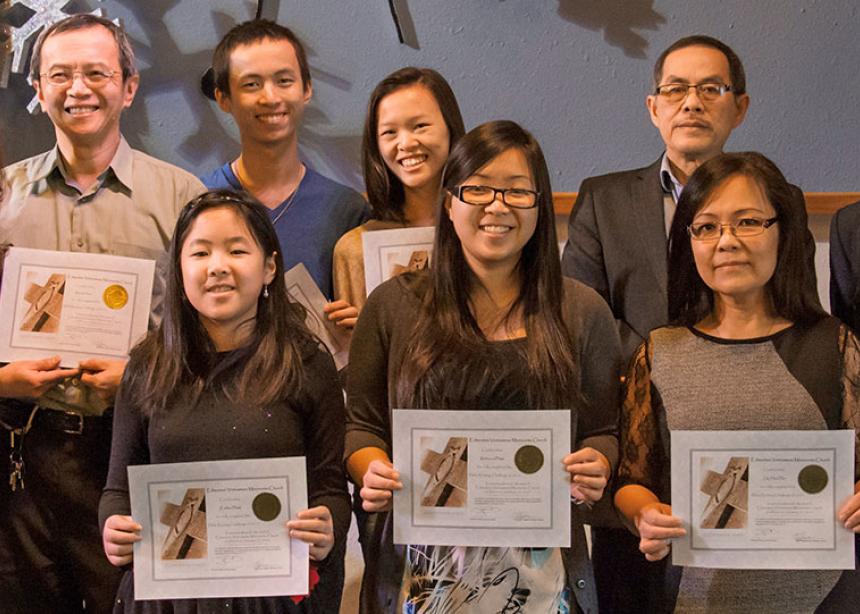 How would you respond if challenged to read the whole Bible in a year? When Kuen Yee issued the challenge to her congregants at Edmonton Vietnamese Mennonite Church at the end of 2012, the pastor couldn’t have guessed at the success her church would celebrate one year later.

During the Jan. 12 worship service, nine congregants received certificates to acknowledge their accomplishment. The youngest successful reader, Esther Pham, is only 12 years old.

Deborah Yee, Kuen’s 16-year-old daughter, received the challenge with joy, expressing a desire to understand what and why she believes by reading the Bible from cover to cover. “This was really exciting for me because I had wanted to read the entire Bible for a very long time,” she said. “By reading through the whole Bible, I can see exactly what God’s message is to me and be able to talk about the Bible to believers and non-believers with a clearer understanding.”

Reading the whole Bible, however, proved a daunting task for Rebecca Pham, a second-year science student at the University of Alberta. “The most difficult part was being disciplined,” she said. “Surprisingly, this was hardest in the summer when I had the most free time, because I didn’t follow a regular schedule.”

Reading parts of the Old Testament proved difficult for the participants. “There were many long chapters describing the generations of sons of Israel,” Deborah said of one difficulty, “but also because it had much more graphic description than I was expecting. It was difficult to read the many sins of the kings after David or the acts people committed that are unacceptable today.”

Added Rebecca, “Israel’s constant disobedience and all the violence in the Old Testament surprised me. I knew there was some of that, but I didn’t know it was to that degree and frequency.”

While finding time to read proved difficult, Rebecca found bits of time at school or before going to bed. “I really didn’t have to give up anything . . . except maybe time I would have wasted on social media anyway,” she said.

Deborah found that listening to the Bible while riding the bus was a good way to catch up, but noted, “I also spent many nights reading, which did cut into my sleep, but it was well worth it.”

Both families, the Phams and the Yees, strongly supported each other’s efforts. The Phams have “Phamily” time, a half-hour each night when they read their Bibles individually and then come together to pray.

Deborah offers this advice to her peers who want to read the Bible: “I would say, get a friend or group to read with you. Having someone there with you to push you when it gets hard, talk to you when it’s confusing, and experience what you are experiencing, just makes it that much better.”

Edmonton Vietnamese Mennonite isn’t finished challenging members, especially its leaders, to know the Bible. Pastor Thomas Pham recently encouraged the memorization of 55 selected verses that summarize the story of salvation. Within a month, eight people had completed the task successfully and more memorization is in the works. For January and February, 33 verses on love have been suggested. From March through November, the congregation is being challenged with 10 verses each month related to a different “fruit of the Spirit.”

“When you know it, you have Scriptures to help you.” Pastor Pham said.