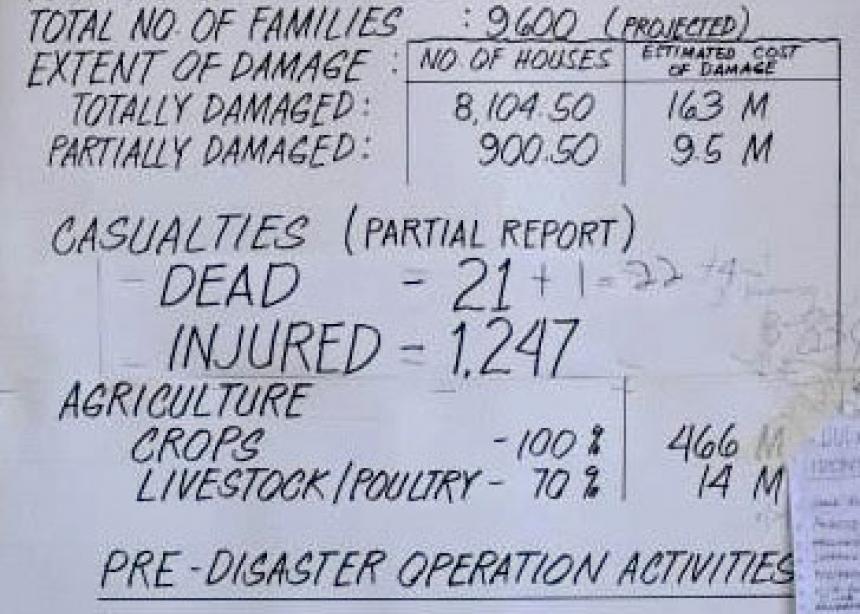 Like the news, the winds and rain that came with Super Typhoon Haiyan have let up. But the damage from the storm that slammed regions of the Philippines on Nov. 8, 2013, remains on the mental and emotional front page for survivors.

One of the most intense tropical storms on record, Haiyan was nearly 500 kilometres across when it hit land. Winds were recorded at up to 314 kilometres per hour and water rose to nine metres above sea level along the coasts. According to published reports, the death toll is at least 6,000, and more than 11 million people are estimated to have been affected by the storm. Many have fled to Manila.

Many pastors and local church volunteers have themselves been hard hit by the super typhoon, but are aiding others while trying to get their own families back on their feet. Local government officials, who are responsible for providing services, are also among the many victims.

Gordon Janzen, MC Canada’s director for Asian ministries, says that while the Pantojas continue to mobilize local pastors and congregations, it will likely take many years to restore  the infrastructure, homes and incomes of Filipinos.

“In addition to physical restoration, there will be a long and ongoing need for spiritual restoration, as typhoon victims struggle to overcome long-lasting trauma and fear that another super typhoon could hit the region again,” he says, adding, “The lost ability to earn income is a frustrating complication, making a return to normal even more difficult. Farm lands have been devastated.”

Establishing communication with the Pantojas has been difficult. Their deep commitment and compassion for survivors has led to long, energy-sapping days and interrupted nights. However, their Peacebuilders website reports glimmers of hope, despite the difficult and chaotic scene.

Mennonite Central Committee (MCC) is partnering with PBCI to send relief to the city of Ormoc on Leyte Island. Ormoc is a neighbouring city to Tacloban in the hardest-hit region.

Food packages and non-food items, such as bath soap, detergent, towels and pails for carrying water to improve sanitation and hygiene will be distributed mostly in Dulag, Tolosa, and Tabontabon, which are south of Tacloban.

With reports from the Mennonite Mission Network.

Dann Pantoja, second from left, and his team pray for the pastor of a local church. ‘His house was totally destroyed,’ says Pantoja. ‘His wife and children were hungry when we arrived. Many of his neighbours died. He cannot locate the families belonging to his congregation.’ (Photo by Daniel Byron ‘Bee’ Pantoja / From the PBCI website) 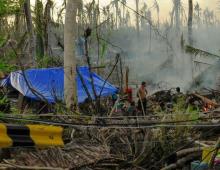 A man is dwarfed by the scale of the disaster created by Super Typhoon Haiyan. (Photo by John Chau / Used by permission)