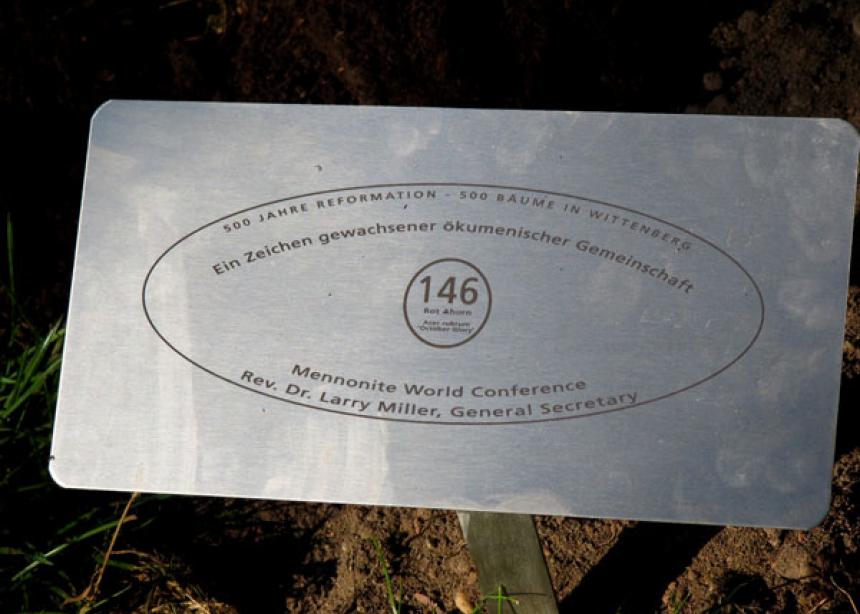 Mennonites planted two trees in the Luthergarten in Wittenberg, Germany, in early October to mark the deepening of Mennonite-Lutheran relations.

The project, initiated by the Lutheran World Federation, is being developed in anticipation of the 500th anniversary of Martin Luther’s posting of his 95 theses on a church door in Wittenberg in 2017. Churches from around the world are being invited to sponsor a tree and also to plant a corresponding tree in a significant place for their own church.

Larry Miller, then general secretary of Mennonite World Conference, planted a red maple next to a tree planted nearly two years ago by the Lutheran federation, when it invited a number of other global church communions—Anglican, Methodist, Reformed and Catholic—to participate in the garden project.

In his remarks, Miller recalled that when the Lutheran planners for this earlier event asked whether Mennonites should be invited, they said, “No, not yet.” He added, though, that “the ‘fullness of time’ in Lutheran-Mennonite reconciliation was drawing near, but had not yet come in power, as it did in Stuttgart less than one year later,” referring to July 2010, when Lutherans issued an official apology for the historical persecution of Anabaptists and discrimination against Mennonites.

A second tree was planted in the Luthergarten by Frieder Boller, president of the Arbeitsgemeinschaft Mennonitischer Gemeinden in Germany. The German Mennonite church and the Evangelical Lutheran Church in Germany have engaged in ecumenical dialogue and joint communion for the past 15 years.

The tree plantings in Wittenberg preceded a German Lutheran/Mennonite symposium on the topic of “Healing of Memories: Reconciliation in Christ,” which both celebrated recent advances in Lutheran/Mennonite relationships and discussed new possibilities for their future. 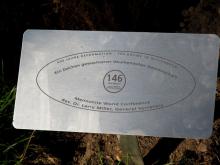