The train that never was 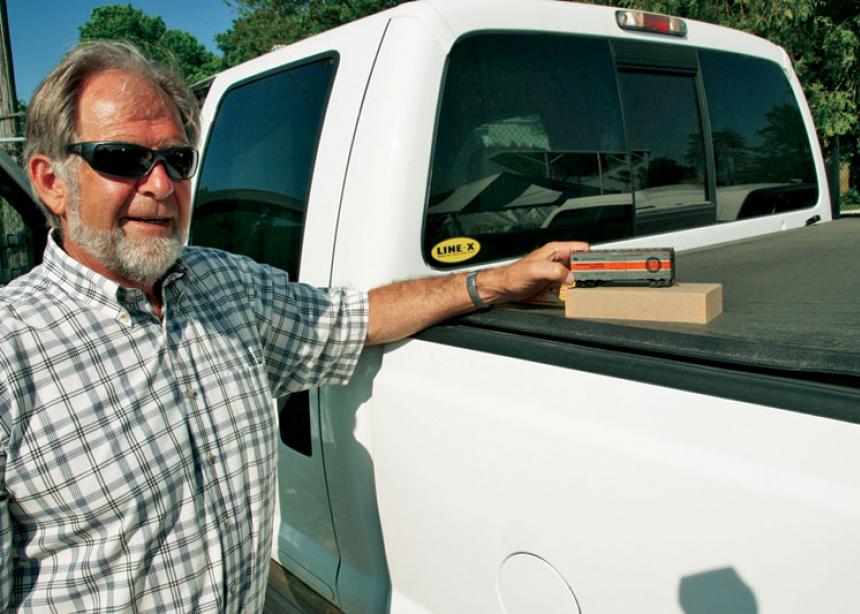 Ross Shantz, chair of the New Hamburg (Ont.) Mennonite Relief Sale, is an ardent model train enthusiast, so when he and his wife Sandra were on holiday in Phoenix, Ariz., this past winter, they went to a model train show. “What should I look for” among all the train cars, engines and memorabilia? Sandra asked her husband, who suggested Canadian cars, since “they might have something different here than at home.” Some time later, she called him over, exclaiming, “Look at this!” It was a Mennonite Central Committee (MCC) box car.

Shantz bought it and brought it home to show Willard Martin, another model train collector with an encyclopaedic memory. Martin explained that the model was not based on a real car, but on a story by Jan Gleysteen in the September 1959 Words of Cheer, a Mennonite Sunday school paper. Gleysteen designed an MCC box car to match those of the Friendship Train, an American relief effort in 1947 that filled 280 box cars with goods to send to Europe.

While Gleysteen supplied paper cut-outs to paste onto model trains, the idea was soon picked up by Walthers in Milwaukee, Wis., which made decals to mount on model trains. Eventually, Rules Hobby in Mannheim, Pa., took over the project.

In the ensuing years, other model train cars have been made, some by friends of MCC like Loren Neufeld of Houston, Tex., described by John Longhurst, a former MCC volunteer, in a model train blog as “an accomplished model railroader.”

Longhurst also noted in the blog, “In 1995, when MCC celebrated its 75th anniversary, I worked with others (Willard Martin, David R. Dyck, Ken Epp, Frank DeFehr and Loren Neufeld) to make versions of this car to raise money for the agency’s relief and development work around the world. Four cars were made: Two in HO [scale] and two in N [scale]. One car was a [15-metre] version with the agency’s modern logo; the other was a version of the original Train-Miniature car. The artwork for the cars was created by Loren . . . .”

Shantz’s set-up at home is not extensive, but after the 2010 Relief Sale this past summer it had yet another MCC box car. Dennis Swinger Sr. from Lind, Wash., the creator of the MCC box car sold as the Great Northern, brought several along to the New Hamburg sale, and Shantz, who was busy throughout the day, asked him to bid on a car for him at the auction.

When they met later, Swinger asked if Shantz still wanted the car. It seems someone heard that the car was being bid on for him and the price went over $100. Shantz gladly paid up and added the car to his collection.

“I’ll donate to MCC one way or another,” he told Canadian Mennonite.