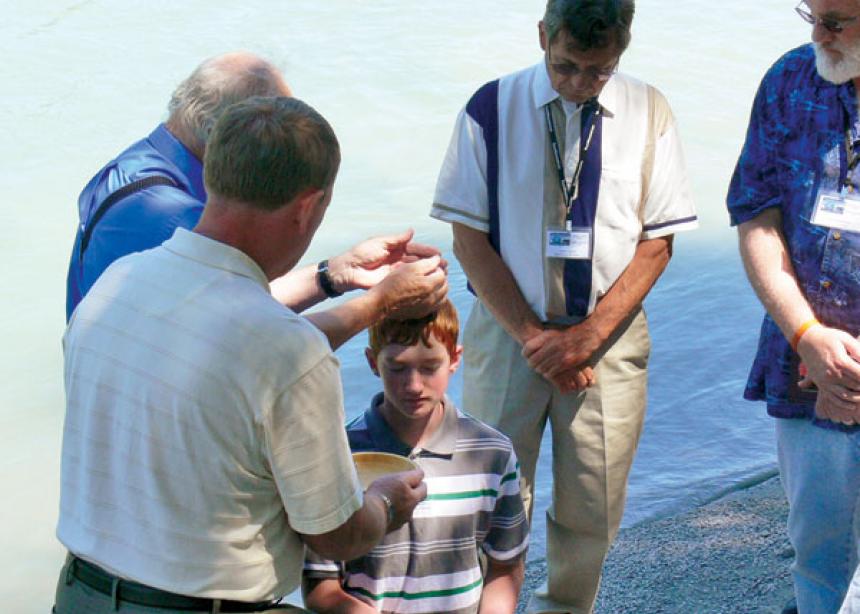 On July 4, while on a TourMagination trip though the Swiss Alps, 14-year-old Westhenry was baptized in the Inn River with the tour group standing in as his congregation.

As we look over this past year, nowhere do we see TourMagination’s motto—“building bridges among Mennonites, other Christians and faiths around the world through custom-designed travel”—better lived out than in a series of events in the Swiss Alps.

This tour brought together a diverse group of people—from Quakers to conservative Mennonites. Some tour members knew one another in advance, while many did not.

Being in places that are significant to their heritage, all the tour members reflected on their own faith journeys, but none more than 14-year-old Westhenry, the youngest tour member. As the group visited Zürich’s Anabaptist Cave, where Anabaptists once had to worship secretly, Westhenry wondered whether this tour would be an appropriate setting for him to be baptized.

The next day, he brought his question to tour leader John Ruth. Recognizing the considerable spectrum of churches represented, Ruth proposed a “conversation” on the drive to Innsbruck, Austria. The tour group became a temporary congregation, giving Westhenry much to think about while affirming his desire to be baptized.

While visiting Rattenberg, where the Inn River once flowed with the blood of Anabaptist martyrs, tour members gathered on its bank to celebrate this rite. One pastor read the account of Lydia’s baptism in Acts, while another led in prayer. Still another pastor scooped water from the swift Alpine-fed current. Ruth employed from memory the traditional words for baptism from the Mennonite Minister’s Manual. Afterwards, each member greeted Westhenry with a welcome into the family of faith. The ceremony was photographed and videotaped for Westhenry’s father back home.

This baptism deepened a sense of fellowship among tour members. “All of us were deeply touched by the spiritual sincerity shown by our young brother, and rejoice that the meaning of our tour was enhanced in his accepting the covenant of Christian baptism in our midst,” Ruth says of the event.

Perhaps the most lovely story happened on Westhenry’s return trip. He had insisted on carrying a bottle of water from his baptism in his carry-on luggage, fearing it would be broken in transit otherwise. His mother was certain the bottle would be confiscated, but a security guard overheard Westhenry’s story of faith, and sent him on his way with his water and a blessing.

We never know where or how bridges will be built, but we are grateful to God for life-changing experiences like this one, where brothers and sisters rejoiced together and new life began. 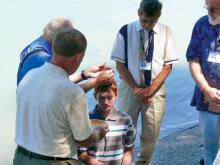 On July 4, while on a TourMagination trip though the Swiss Alps, 14-year-old Westhenry was baptized in the Inn River with the tour group standing in as his congregation.