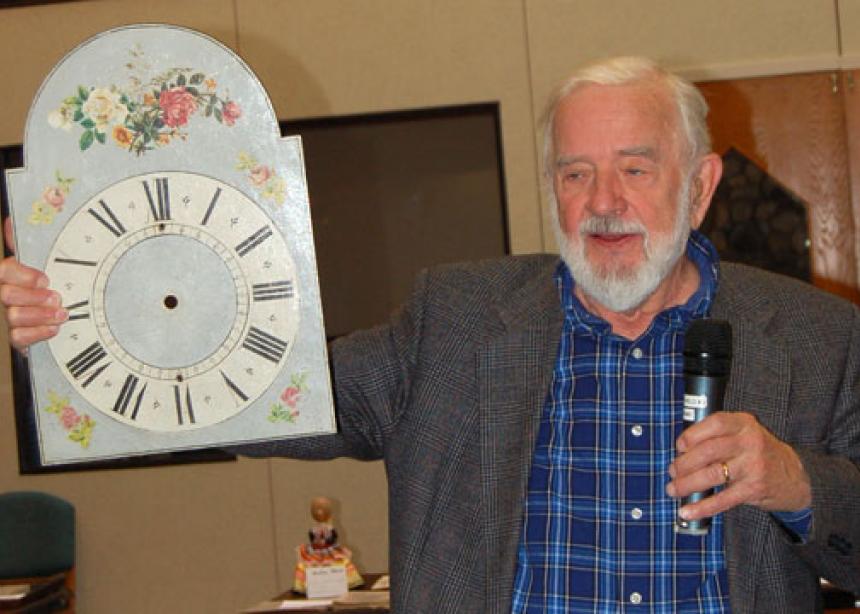 Where could you go in your town to find a show of artifacts from three or four continents? Our 50 +/- group at Waterloo North Mennonite Church, Waterloo, did just that after we followed through with a suggestion from our previous meeting.

“Bring anything antique, unique, memorable, collectable, sentimental, newly created,” the instructions said. So under the skylights of the fellowship area of the church on April 10, a cold, dreary day, an instant “museum” sprang up for two hours and then disappeared back into the homes from whence the treasures had come.

The museum pieces reflected the nature of our Waterloo North constituency: homes with connections to Pennsylvania forebears (Helen Reusser’s fraktur and pin-pricking art); Ukrainian homes from which refugees had fled from violence (Gudrun Mathies’ family Bible and Anne Friesen’s drinking cup); and from other homes in global places of members’ upbringing (Kayoko Shimpo’s Japanese calligraphy, “Listen to the Snow”); and from extended travels (the Peters’ special African masks.) There were family photographs, grandmothers’ and great-grandmothers’ lockets, engagement or wedding watches, and school books.

There were hymnals and other books, some kept in North American homes for generations. Jan Overduin’s 17th-century devotional book by Theodorus Brakel, Steps of the Spiritual Life, was in his father’s library in the Netherlands. “He got if from his dad, my grandfather, who no doubt got it from his dad, the founder of the Overduin pastors dynasty,” he explained. “It’s clear that the author’s priority was developing a close walk with God, ‘enjoying’ the presence of God in his daily life.”

Absorbed with looking at the tables full of exhibits, our heads turned, however, as Palmer Becker entered the room wearing his great-grandfather’s Siberian goat coat brought from Russia by his grandparents in 1875. Nearly five kilograms in weight, the coat lay on a table like a weary animal when Palmer took it off and felt a lot lighter!

Overcome by emotion, Anne Schmidt Friesen asked a friend to read her description: “This cup is the only heirloom I have. It was from a set that my grandparents got as a 25th-wedding anniversary gift in my home village of Margenau in southern Ukraine. Years later, it was the only thing of value that my mother took as we fled our home during World War II. She took it so that we could have a drink of water as we made our way westward. At one point we found ourselves in Poland and under attack from Soviet troops. As we fled that day, my mother again took this cup and put it in a little cloth bag so that we could drink water.”

A piece of “found art” came from Wilbur Maust’s residence. He described it thus: “On our summer holiday on Manitoulin Island in the ’80s I found this piece of driftwood on the beach of Gore Bay [Ont.]. I removed the sand and dirt with my Swiss knife. The form that emerged looked like a dancer with a scarf thrown overhead. I only shaped the head and the feet slightly, then coated it with olive oil and mounted it on a base.”

The beauty of viewing a private museum is that you not only get an appreciation of the objets d’art, but also a new understanding of their owners. My only advice to those attempting a treasured showing like ours would be to exhibit at a time when all church congregants gather. Children and grandchildren would no doubt be surprised and edified.

Miriam Maust is a long-time member of Waterloo North Mennonite Church and recently authored her memoir-in-essays, On Language and Love.

Anne Schmidt Friesen treasures a teacup her mother saved when the family was forced to flee Ukraine during the Second World War.

Palmer Becker entered the room wearing his great-grandfather’s Siberian goat coat brought from Russia by his grandparents in 1875. 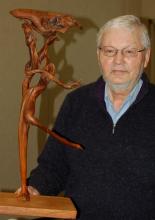 Wilbur Maust ‘found’ this piece of driftwood on Manitoulin Island, Ont., cleaned it up and mounted it.