A ‘timeless’ message about war and peace 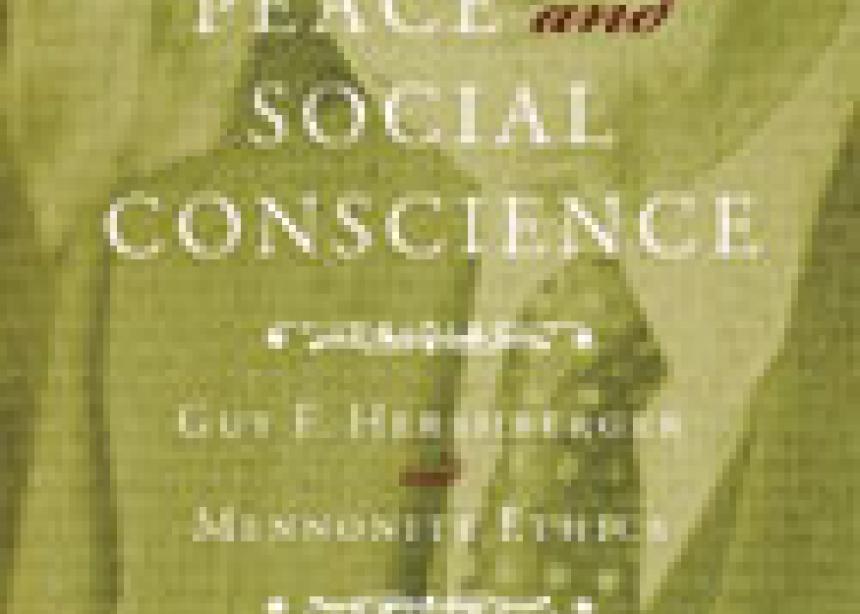 John Howard Yoder is one of the best-known Mennonite thinkers on peace. But before Yoder, there was Guy F. Hershberger, whose reflections on war, peace and violence not only helped Mennonites navigate perilous times in the early- to mid-20th century, but also laid the foundation for Yoder’s groundbreaking work.

“Up until the arrival of Yoder, Hershberger was the most important figure in the Mennonite church for translating pacifism into practical life,” says Theron F. Schlabach, author of War, Peace and Social Conscience: The Life and Thought of Guy F. Hershberger, a new book from Herald Press.

Among other contributions, Hershberger, who lived from 1896-1989, helped lay the foundation for what became the Alternative Service Program in the U.S. during World War II; played a key role in the creation of Mennonite Mutual Aid in 1945; and helped guide the Mennonite church’s response to the civil rights movement—nudging the church towards greater openness to Martin Luther King, Jr.’s call for justice for African-Americans.

Schlabach, a professor of history at Goshen College, Ind., from 1965-98, took time to reflect on the important role Hershberger played in the Mennonite church in the last century—and why Mennonites and other Christians today should want to know more about him.

Longhurst: Why was Guy F. Hershberger such an important figure?

Schlabach: He came along at a hinge point in Mennonite history in the U.S. It was a time when Mennonites were beginning to engage the world more, become more educated and more urban. Mennonites were also becoming more aware of the wider world, and their role in it. He helped that generation to articulate their faith and beliefs, and see how they could practise them in the world.

But he wasn’t just important for the Mennonite church. He had influence in other Mennonite groups, and in other Christian denominations, too. Many people benefited from his thinking on a Christian response to issues like war, labour relations, economic justice, racial equality and capital punishment.

Longhurst: What was the special contribution Hershberger made to the church?

Schlabach: He offered Christians a biblically based rationale for pacifism, in contrast to pacifist approaches that were grounded in other rationales, such as socialism, humanitarianism or activism. He believed that Christians should actively seek peace in order to help people in need, but he felt strongly that our pacifism should be grounded in the Bible and in our desire to be disciples of Jesus.

Longhurst: What is the connection between Hershberger and Yoder?

Schlabach: Personally, I find it hard to imagine John Howard Yoder without Guy F. Hershberger. Yoder took what Hershberger started and expanded on it in even more scholarly and sophisticated ways. He put it into terms that modern scholars and intellectuals could appreciate at another level.

Longhurst: Why should Mennonites and other Christians who are committed to peacemaking be interested in Hershberger today?

Schlabach: The world we live in is not so dissimilar to his. Like him, we have war, chaos and uncertainty today. Like us, Hershberger had to wrestle with those issues. His thinking on how we can live out our faith and commitment to peace can be of great help today, particularly when some wonder if a degree of force is necessary to achieve peace.

At the same time, his message of keeping our pacifism closely connected to our relationship with Jesus is timeless. His life and thought reminds us that we don’t seek peace on humanitarian grounds alone. Rather, it grows out of our belief in the Bible, and our being Christians. It is an integral part of how we live as regenerated people in the world today.