‘A time for inspired leadership and action’ 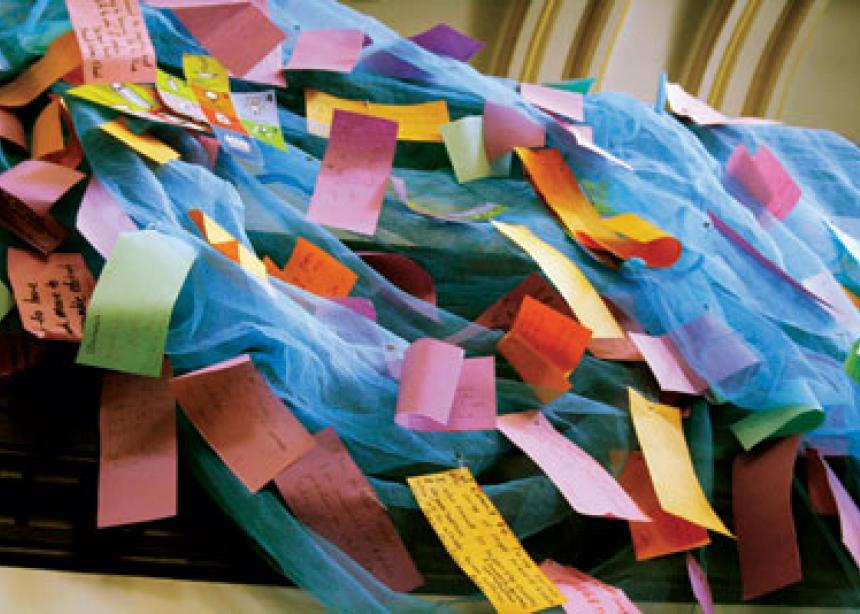 A quilt of sorts was put together as a symbol of the commitment of many interfaith youths and young adults, to aid the Millennium Development Goals in any way possible. It was hung at the University of Winnipeg during the World Religions Summit 2010.

Just days before the leaders of the G8 countries were preparing to meet in central Ontario to discuss such new issues as maternal health in the developing world and a restoration of the rule of law in places like the Democratic Republic of Congo and Iran, religious leaders from these same countries—and others—gathered in Winnipeg in an effort to get their respective governments to live up to a 10-year-old commitment: the Millennium Development Goals (MDGs).

So far, the leaders of the G8 countries are not doing very well, according to the religious leaders of these countries. During their 6th annual World Religions Summit 2010, that took place from June 21-23 at the University of Winnipeg campus, they drafted “A Time for Inspired Leadership and Action,” calling on the political leaders to “do their share and to take all necessary steps to achieve the MDGs” by their agreed-upon deadline of 2015.

Specifically, the document calls on the political leaders to:

• Ensure that global average temperatures do not exceed a two-degree C increase from pre-industrial levels;

The document states that the interfaith leaders “recognize that [they] share responsibility to be and act for the change [they] want to see.” To that end, they made a commitment—and charged their communities and members—to:

• Demonstrate solidarity with the poor and vulnerable in the world;

• Monitor their governments in meeting the MDGs and hold them accountable;

• Change their lifestyle in order to harm the environment less;

• Participate in peacebuilding and peacekeeping activities;

• Promote coexistence among different religious and ethnic communities; and

• Continue meeting at such summits to discuss the issues.

These efforts were made with the hope of “building a movement of political participation that makes seemingly impossible change possible,” the document states.

Eighty senior leaders of the world’s religions and faith-based organizations, together with 13 youth delegates, representing aboriginal, Baha’i, Buddhist, Christian, Hindu, Jewish, Muslim, Shinto and Sikh religious traditions, came to a consensus on the statement. Mennonite Church Canada was represented by general secretary Robert J. Suderman, who served as a panelist at a session on peace and security.

The document was later given to Steven Fletcher, a local Winnipeg Member of Parliament, who was to deliver the document to Prime Minister Stephen Harper to present at the G8 summit later in the week.

A quilt of sorts was put together as a symbol of the commitment of many interfaith youths and young adults, to aid the Millennium Development Goals in any way possible. It was hung at the University of Winnipeg during the World Religions Summit 2010.