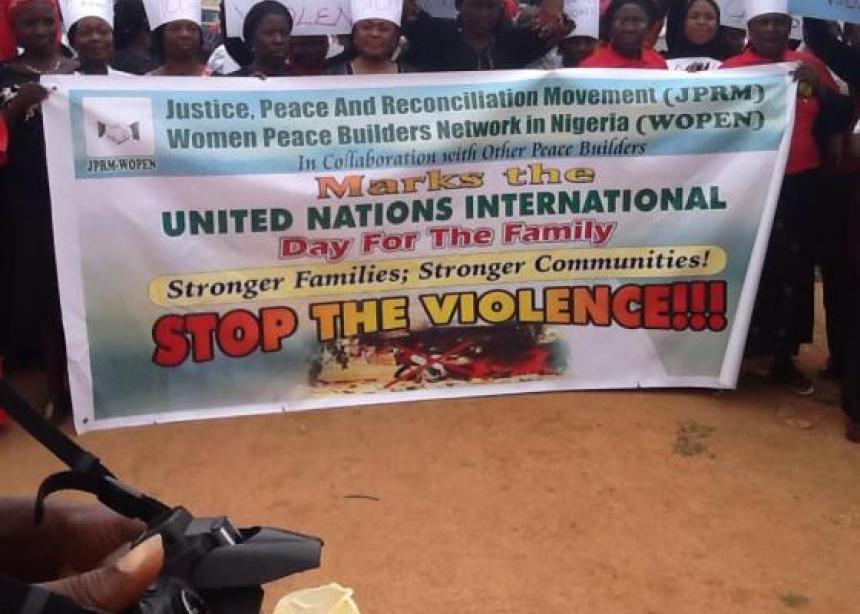 A banner at the May 15 Stop the Violence rally in Jos, Nigeria. (Credit: J PRM)

Dave and Mary Lou are serving with Mennonite Central Committee, based in the city of Jos, Nigeria. They shared this reflection in their support network, following an incident in which two bombs were set off in that city.

We have been quiet for several months partly because we haven't known what to say. Nigeria has received a great deal of international attention and response, particularly around the abductions of the schoolgirls from Chibok in northeastern Nigeria last month.

Yesterday, May 20, as is well known now, two bombs went off in Jos, the city where we live.  Everyone in our personal network is safe, but now we are receiving reports of people who knew people who were killed. We hear that the majority of those killed were women. One friend visited multiple hospitals in town looking through the charred remains of bodies for a missing person, only to find him this morning in an ICU, living, but only just.

What is deeply ironic (and hopeful!) in this situation is that while it is horrible, the blasts have not set off inter-communal violence as has been the pattern in past conflicts.

On May 15, the International Day of the Family, 400 women held a rally in Jos, Plateau State, Nigeria, calling out, “Stop the Violence” and "Bring Back our Girls."

Over the years since 2001, Plateau State has experienced several waves of inter-communal violence of its own, but that did not stop this group from standing in solidarity with the suffering families of Chibok, a community almost 600 kilometres to the east. A passionate speech was given by a woman from Chibok, bringing tears to many.

The rally and march were organized by women leaders, several of whom are friends of Mennonite Central Committee (MCC), including Justina Ngwobia of Justice, Peace, and Reconciliation Movement (JPRM) and Amina Ahmed of Women’s Initiative for Sustainable Community Development (WISCOD), part of the new organization, Women Peace Builders Network in Nigeria (WOPEN).

This afternoon, five days later, two bomb blasts killed and injured dozens of people in the Jos downtown market, destroying property and threatening the peace that Jos residents have been nurturing for at least two years since the last major incident.

People are tired of the violence. Over the past month, there have been demonstrations, prayers, and rallies around Nigeria asking for the return of the Chibok schoolgirls, many led by women. The International Day of the Family rally focused on the wider problems of violence that still plague the rural areas around Jos. It was as if the community of Jos was making bold the line in the sand against violence.

John Paul Lederach, in his book The Moral Imagination: The Art and Soul of Building Peace (Oxford University Press), uses the image of a spider’s web to describe the ways that people in conflicted communities connect to each other. Violence can break connections among people. Like the spider that must re-spin her web when a stray stick or leaf penetrates, so too peace builders help to re-string relationships that are broken by crises. In our 18 months here, we have been privileged to observe dozens of people who work daily to re-build these intricate webs of relationship that have been broken over the years in Jos. We know that connections have been healed and that new webs have been spun.

The challenge facing the community in Plateau State over the next few days is to stand with the women of last Thursday’s rally and insist that the violence must stop. The challenge is to trust that the re-spun webs, though fragile, can withstand even this terrible shock.

We pray for continued stability and for the will for peace to remain strong. 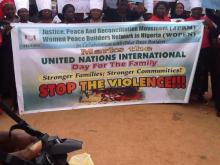 A banner at the May 15 Stop the Violence rally in Jos, Nigeria. (Credit: J PRM) 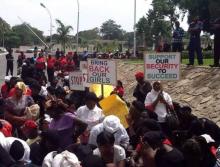 Women of the city of Jos, Nigeria, march in a rally against violence. (Credit: J PRM)