Although at least 25 states have restorative justice programs, various people have told Stutzman Amstutz that such an initiative could never happen at the federal level. 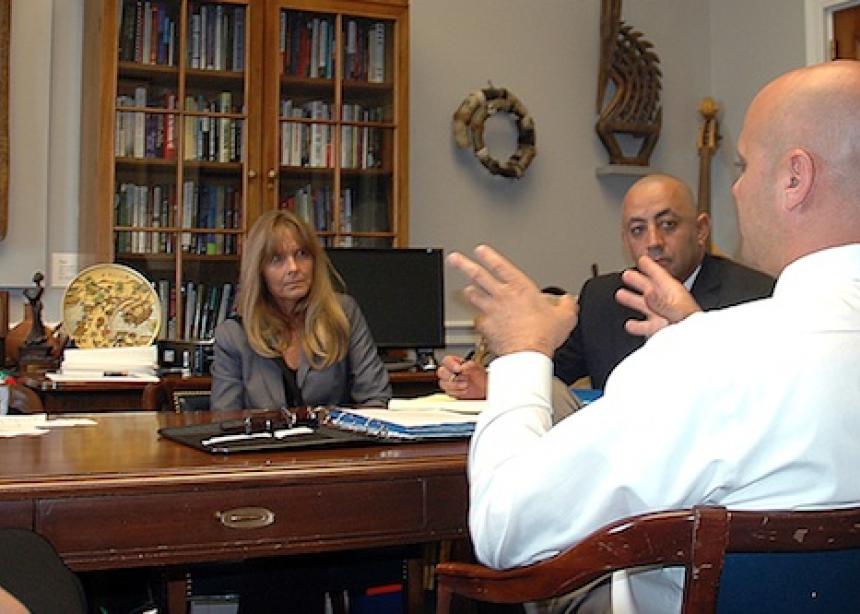 The speaker was Carol Chodroff, a lawyer who works for the Committee on the Judiciary of the U.S. House of Representatives. She was addressing a delegation of Mennonite Central Committee (MCC) staff from Reedley, Calif., the mayor of Reedley and her spouse, and two members of the Reedley Police Department.

Chodroff was impressed by the work West Coast MCC and the Reedley police are doing with restorative justice models, crime victims and crime prevention. Restorative justice addresses harm caused by crime through involving victim, offender, family and community in deciding how to make things as right as possible.

During a visit to Congressional offices and the Department of Justice in Washington, D.C. in late September, the Reedley group advocated for legislation that would support restorative ways to deal with those who commit crimes and their victims. Accompanying them were MCC staff from Washington, D.C., who organized the visit, and MCC staff from Akron, Pa.

At a minimum, said Marc Ediger, a lieutenant with the Reedley Police Department, the group wants no federal laws to be passed that are so suppression (punishment) oriented that restorative programs are no longer permitted at the community level. The delegation also requested that federal funding increase for preventive and restorative justice measures and decrease for suppression programs.

Chodroff said she continues to work for passage of the Youth PROMISE Act (HR 2721), legislation similar to the Reedley efforts, that aims to prevent crime and implement more restorative processes when crime is committed.

In 2008, the Reedley Police Department asked West Coast MCC, which has a reputation as a “safe place” in the community, to work with them during a time of heightened violence in the city. Officials wanted to break the cycle of violence and to enhance support for its victims, who often found it difficult to access needed services.

Over the last two decades, West Coast MCC has served people who are victims of domestic abuse or other violent crime. Through its immigration ministries, West Coast MCC is trusted by people with undocumented legal status who hesitate to report violence to the authorities (see the story of “Silvia” at westcoast.mcc.org/stories/news/victim-service-collaborative-heals-lives).

In July 2009, West Coast MCC and the police established a Victim Service Unit at the MCC Reedley office. Two police community service officers are located there. The unit deals with immediate support issues for victims and crisis intervention and assists with restraining orders and more.

Also since mid-2009, a “Victim Service Collaborative” of health, counseling, youth, legal and other organizations meets monthly at the MCC office. The groups intersect to bring services located in Fresno, 35 miles away, to a “one-stop shop” for Reedley residents, where unemployment runs between 30 and 35 percent, making it hard to afford frequent trips to Fresno.

“There’s always been a disconnect in trust between the community and law enforcement,” said Garza. “There’s been the feeling that ‘if we report something, [the police] will come and take someone from my family to jail.’”

Many organizations working together, including those whom the community has long trusted, increases the likelihood that victims will seek the help they need, said Garza. “It brings validity to the initiative. It makes the work blossom.”

Mayor Mary Fast, a member of Reedley Mennonite Brethren Church, is determined that those who commit crimes, especially juveniles, receive quality help and direction. “The key is to get them before they get into a system where they learn how to be bad rather than good,” she said.

Fast has personal experience with crime and restorative justice. Years ago, when her mother was robbed, the family chose to address the situation through a victim/offender dialogue. Fast remains appreciative that this path was available.

“The kid made a mistake,” she said. “How can we help to make [such young people] whole?”

“That’s our goal,” said Ediger, who has researched restorative justice and its applicability to Reedley. “Police officers aren’t trained to think that way. So it’s a new model for us.”

The police department recently instituted a Victim Offender Reconciliation Program (VORP). VORP facilitators help both victims and offenders who choose this model to talk about what happened in a crime, how life has changed since then and how to put things as right as possible.
In addition to making restitution, when possible, the offender will perform some form of community service.

“We may have kids who committed crimes go talk in a school or to other groups of kids and say what they did and why it is wrong,” said Ediger. “That may be more effective for everyone than picking up trash. But the offender and the victim will need to come up with the plan.”

Many of the VORP volunteer facilitators are from area Mennonite and Mennonite Brethren Churches, a Reedley Peacemakers group that meets every Friday night at First Mennonite Church of Reedley and from the Victim Service Collaborative participants.

In addition to work in Reedley, MCC U.S. addresses these issues nationally. Lorraine Stutzman Amstutz and Michelle Armster, co-directors of the Office on Justice and Peacebuilding, also joined the delegation. As part of Stutzman Amstutz’s work, she provides resources for prisoners and their families as well as victims of crime.

At the Department of Justice, Stutzman Amstutz told of her work with crime victims who request dialogue with the perpetrators, now in jail. Given the severity of the crimes committed, it is not something that all victims seek.

Although at least 25 states have restorative justice programs, various people have told Stutzman Amstutz that such an initiative could never happen at the federal level. However, on this day, at the Department of Justice, she heard a different response.

“We can make contact in the federal system,” said Eugene Schneeberg, director of Faith Based and Neighborhood Partnerships in the Department of Justice. “With a record of success in the states, it should be possible to at least do a pilot project on the federal level.”