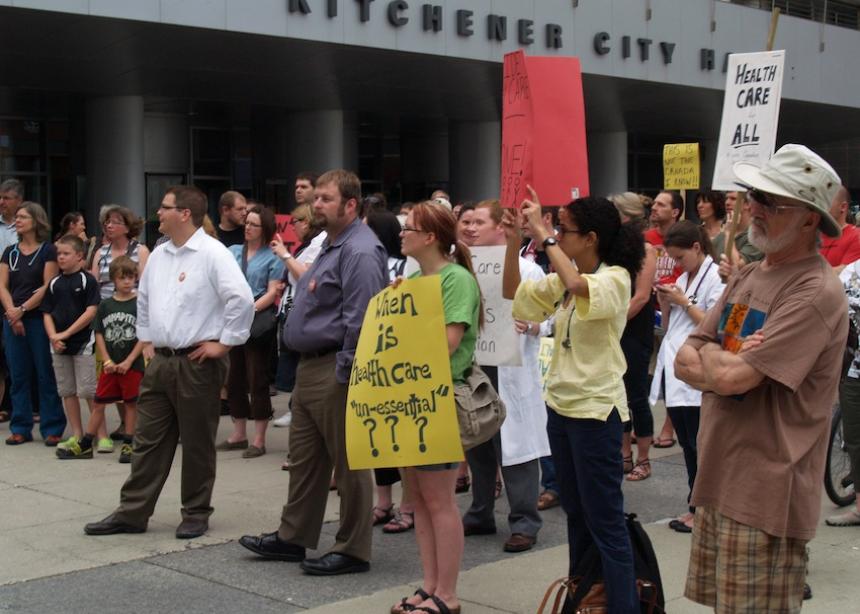 Most recently, Ottawa reduced health services for refugees. Under the pared down Interim Federal Health Program (IFHP), certain newcomers will no longer be covered for dental care, eye care, long-term care or prescription medications, except when public health is at risk. General health care will be restricted to matters of an “essential or urgent nature” and to communicable diseases and other public risks.

Jason Kenney, Minister of Citizenship and Immigration, said in an April release that the changes will help the immigration system better meet “Canada's economic needs.” He said Canadians are “very generous” but should not need to cover these services for refugees. The government hopes the changes will save $100 million over five years.

In the last five years Canada has accepted an average of 253,000 immigrants annually. Less than 10 percent of these—about 25,000—are refugees. The rest are “family class” immigrants joining relatives already in Canada or “economic class” immigrants such as skilled workers and entrepreneurs.

Of the 25,000 refugees, some have prearranged sponsors while others—roughly a third, according to Ed Wiebe who works on refugee issues for Mennonite Central Committee Canada—land here without prior arrangement and make their claim upon arrival. These people are called refugee claimants or asylum seekers. In addition to the successful claimants, roughly another time as many are rejected.

This latter group is of particular concern to the government. In emails to Canadian Mennonite, Citizenship and Immigration officials emphasized that the greatest IFHP changes will be for people who come from countries the minister has deemed safe and democratic. Officials say over 95 percent of applications from these Designated Countries of Origin (DCO) are currently rejected or withdraw from the process. Health services for all DCO claimants while they await their refugee board hearings and potential deportation will be sharply curtailed once the DCO policy comes into effect, likely in fall.

But lesser changes will extend also to the most vulnerable refugee claimants. This troubles Eunice Valenzuela. She heads the Mennonite Coalition for Refugee Support, a Kitchener, Ont.-based organization that provides legal, logistical and community supports to about 400 unsponsored refugee families primarily from unsafe, non-DCO countries.

Valenzuela says “every human being has the right to have access to health care.”

Department officials say people like Valenzuela's clients will see “little or no change in the level of primary health care coverage they receive.” They will be covered for “hospital, medical, diagnostic and ambulance services in most cases.” But regulations clearly show they will not be covered for “supplemental benefits” such as prescription medication, home care, eye care or dental care, unless the public is at risk. Reductions in supplemental benefits for all refugees will account for about half the $100-million projected savings.

In the case of sponsored refugees, the sponsors—often churches—can opt to pay for ineligible expenses, but Valenzuela's clients will need to pay up themselves or do without.

In a letter to Kenney, eight national healthcare associations slammed the changes, which went into effect on June 30. “Are we as a country willing to risk the health of a pregnant mother who is receiving required medications before June 20 by telling her she is no longer eligible after June 30?” the letter asks. The health care providers also say reducing preventative care will ultimately cost more rather than less.

Valenzuela says Ottawa is showing an increasingly “negative” attitude toward refugees. Wiebe talks about a “hardening” of government positions. In a May 12 letter to the Ottawa Citizen, Kenney said of the IFHP changes, “What is changing is that bogus refugees, including those whose claims have been rejected, will no longer receive, at taxpayer expense, enhanced services . . . that are unavailable to many Canadians.”

In response, Valenzuela says a minister who lumps vulnerable, honest people in with fraudulent claimants is a “bogus” minister.

Referring to clients who have survived torture and families that face life and death situations, she asks: “What right does [Kenney] have to call them bogus?”

In a May speech to the Empire Club in Toronto, Kenney said Canada must avoid the “anti-immigrant sentiment” that is “regrettably” widespread in the U.S. But federal officials often depict refugees as suspicious characters out to skirt laws and take advantage of taxpayers. The focus is often on catching cheaters. Valenzuela objects to this public injection of fear.

“Compassion and fairness are a source of great pride for Canadians,” says the Citizenship and Immigration website, but few refugee claimants will have gleaned that sentiment from Kenney's comments about them or from the blunt one-page letter they received about the health cuts.

Canadian Mennonites—many of whom are descendants of refugees or refugees themselves—have a strong history of sponsoring global neighbours in need of a safe homeland. At the same time, Wiebe sees the effects of negative messaging in churches he visits. “That rhetoric is winning these days,” he says, even though the record shows “we have had little to fear from those who have come to Canada.”

As suspicion of refugees grows in Canada, a few of the 10.5 million global refugees will hope Mennonite hospitality remains intact. 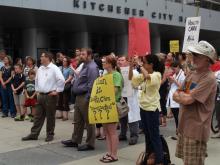