Jack and Irene were invited by Rebecca Slough, academic dean, to add their presence to the campus community 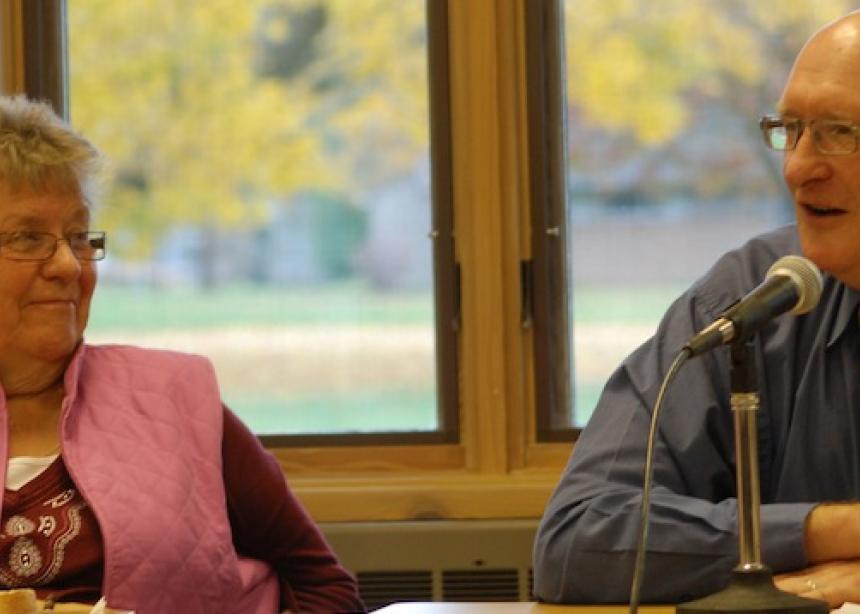 During a lunch gathering on their last day at AMBS, Irene and Jack Suderman reflected on forty years of ministry. A prevailing theme, Jack noted, is the important role of the church in our lives and in the world. “The peoplehood of God is the primary strategy God wants to use to heal the world,” he said.

Robert J. (Jack) and Irene Suderman say it was a gift to spend five weeks at Associated Mennonite Biblical Seminary where they studied almost 40 years ago.

Jack and Irene were invited by Rebecca Slough, academic dean, to add their presence to the campus community. “I wanted our students to have access to these leaders with all of their involvements in so many areas of the church and the world,” Slough said.

During their visit, which began October 1, Irene participated in classes and shared from her experiences in pastoral, hospice and palliative care. She found opportunities for meaningful conversations with students as she spent time in the AMBS library and the gallery near the library.

“It has been a privilege to share the journey we have been on, as well as reflect on the discernment we experienced while we were students here,” Irene said. “We’ve appreciated the opportunity to encourage students as they prepare for ministry in the church..”

Jack was a student at AMBS in the early 1970s earning a Master of Arts in Religion with a focus on peace studies. Irene audited classes at that time and worked in the seminary’s day care. The return to the seminary this fall gave them opportunities to reflect on their earlier study and the ministry that followed.

“I realized how much of what we have done post-seminary was profoundly shaped by what we learned here,” Jack said. “At the time—like students today—we wondered about the value of some of what we studied, but after 35 years of work I realize how very valuable this was even though we didn’t know it at the time. It’s been a surprising reengagement and new appreciatio

Jack had a busy schedule for the five weeks at AMBS. He led a full-day workshop on discernment in the congregation, led a webinar on teaching the Bible in the congregation and gave presentations in several classes. In addition, he joined Mennonite Mission Network staff and friends for discussions on current challenges in mission.

Together Irene and Jack led a chapel service on Canadian Thanksgiving and shared reflections on their ministry in a colloquium. Their time in Elkhart also allowed them to reconnect with many people they know. One of these opportunities came when they participated in the Shenk Mission Lectureship, which brought together historians and missiologists from many parts of the world to celebrate the Global Mennonite History Project. They knew a number of other participants from earlier ministries of teaching in Bolivia and Colombia and serving as resource people in Indonesia, India, the Philippines and Cuba.

In addition to these earlier assignments, Jack served with Mennonite Church Canada for 14 years, including serving as general secretary from 2005 to 2010. Irene has been involved in music and worship ministry, pastoral care to seniors as well as hospice and palliative care.  “It’s been important for someone of their stature to bring their wide experiences into our community,” Slough said. “It’s been good for me—and I hope for the seminary—for them to reflect back what they see for AMBS right now, what might we pay attention to.”

One obvious change that Irene observed is in the nature of the campus community. Because fewer students live on campus now, they don’t share as many common experiences. “I would think it’s more difficult for students wrestling with issues to not have a close community accompanying them,” she said. But she also emphasized, “Our churches need the seminary with its gifted people to help train and develop the gifts that each student brings.”

Jack indicated that “an understanding that highlights a compelling vision of the nature, identity, and vocation of the church in God’s plan has been strongly eroded in our society and church. A sense that this vocation is foundational for all ministry is indeed very weak.” However, AMBS is one of the places where this erosion hasn’t yet happened, or at least not to the degree as elsewhere, Jack observed. So the task for AMBS is to continue calling the church to this vocation. “This will be increasingly important and increasingly difficult. But it needs to be a priority for the next 20 years. My hope is that every student would leave AMBS having come face-to-face with a compelling and passionate vision for the purpose of the church in God’s desire to restore creation to its original intentions.”

Jack and Irene left AMBS on November 8 so they could keep a commitment to be in India by the end of the week. They were called there by Mennonite World Conference for several assignments, including leadership training, leading discussions on how to be Anabaptists in a multicultural society, teaching at Union Seminary in Pune, and visiting churches in an area that has experienced significant conflict and violence.

The Suderman’s time at AMBS was made possible, in part, by the support they receive from Mennonite Church Canada in their ongoing ministry. While they consider their time at AMBS to be a gift that connected them with an important time in their formation for ministry, the seminary also experienced a gift as students and faculty learned not only from their teaching, but also from their presence. “Hospitality and gratitude are so ingrained in their way of being,” Slough observed, “that they have been able to both receive students’ questions and to ask important questions, to see how every conversation is a possibility for mutual learning.”

During a lunch gathering on their last day at AMBS, Irene and Jack Suderman reflected on forty years of ministry. A prevailing theme, Jack noted, is the important role of the church in our lives and in the world. “The peoplehood of God is the primary strategy God wants to use to heal the world,” he said.