Stouffville counters with peace at 1812 parade

Watch the six-minute YouTube video (linked in the story below) done by Steve Authier, pastor of the Heise Hill Brethren-in-Christ Church. 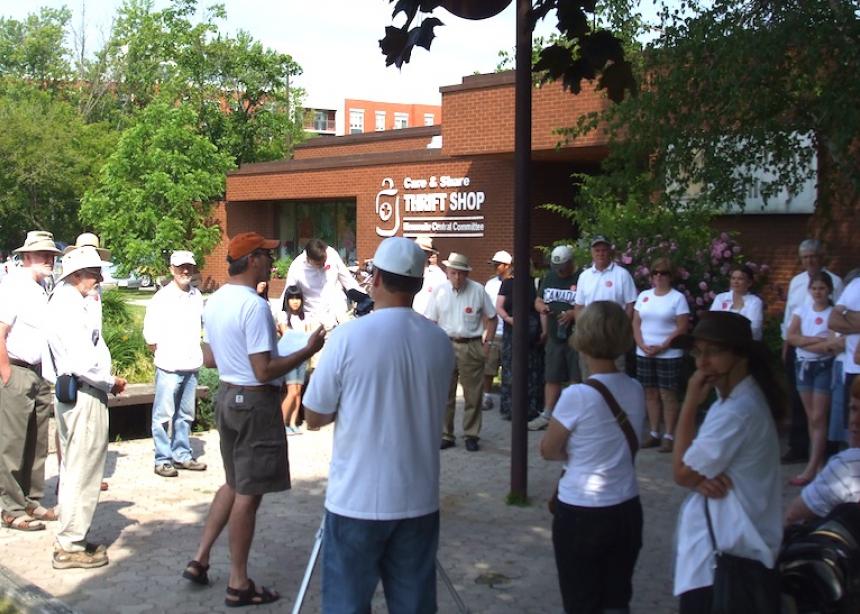 Some 60 Mennonites, Quakers and Brethren in Christ members, including seniors and children, gathered for a peace church testimony Saturday, June 16, during Stouffville’s commemoration of the War of 1812, complete with a parade of Governor General’s Horse Guard, reports Arnold Neufelt-Fast, one of the organizers of the group.

The commemoration, planned and implemented by the local Member of Parliament, Paul Calandra and endorsed by the town council, did not acknowledge the town’s pacifist founding, despite several appeals by peace church organizers to do so. Stouffville was named after a Mennonite, Abraham Stouffer, who in 1805 along with 55 other families, was seeking religious freedom and refusing to “take up the bayonet and rifle” on religious grounds.

Dressed in white and wearing the Mennonite Central Committee peace buttons (“To remember is to work for PEACE”), the group, led by Neufelt-Fast, reviewed their concerns about the commemoration overlooking the pacifist founding of the town, read peace texts from Jesus, Menno Simons and William Penn and engaged in prayer.

Their key historical concern, said Neufelt-Fast, was the government’s overlooking the fact that Mennonites, Brethren in Christ, and Quakers were the predominant settler groups in the areas in which hamlets arose in what is today Whitchurch-Stouffville. No other area in Upper Canada had all three historic peace churches living in such concentration and in such close proximity (Quakers in the northern part of Whitchurch; Mennonites to the south; Tunkers [Brethren in Christ] in the south-west).

“Their response to the War of 1812 was one of conscientious objection,” he said.  ”In the years before (from 1808 and onward), during and after the war, Captain Button had no land in what is today Oak Ridges - Markham, let alone Whitchurch-Stouffville. Only much later (1820s /30s) did some of the next generation of Buttons settle here (Ringwood). According to our Legion's list of vets, two--maybe three--vets came from the area of what is Whitchurch-Stouffville (another five or six had their next generation next kin in this area; eight in total).

“For these reasons the proposal was received as hurtful and divisive for our three church groups. Our history was effectively disqualified, erased and rewritten, with the powerful help of pomp and ceremony, tanks and cavalry. There's a reason why the peace dove is at the top of the W-S crest--it reflects our town's history well. Saturday's reception by the Mayor of a sword from the ‘descendents’ of Button's Calvary, the GG Horse Guard, is a powerful symbolic challenge to our town's historic roots.”