Still Speedy after all these years

"Speedy" Gehman and her trusty, albeit a bit rusty, mechanical steed, a blue
1967 Volkswagen Beetle, are almost synonymous to many observers. 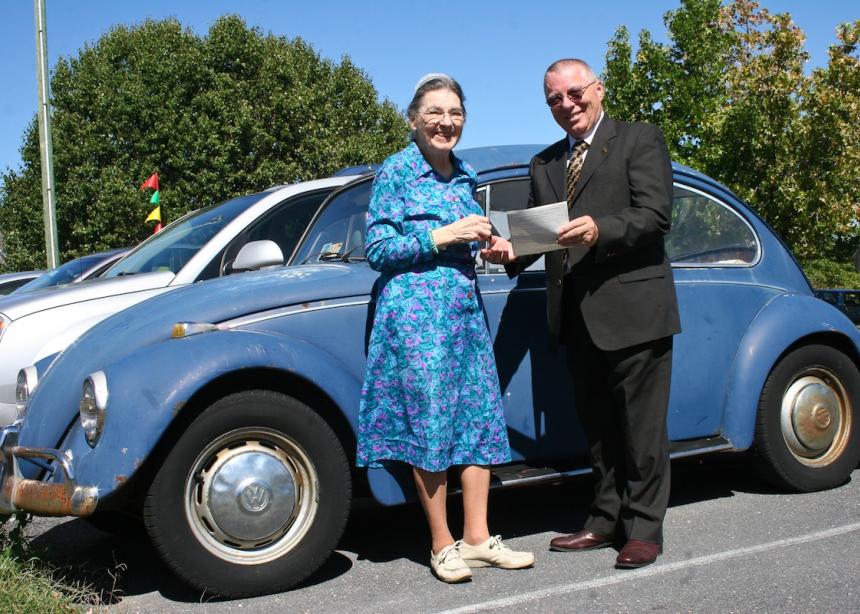 At age 88, Margaret Martin Gehman of Harrisonburg has lost a little of her trademark drive, largely because she has parted company with a faithful friend.

Dr. Gehman and her trusty, albeit a bit rusty, mechanical steed, a blue 1967 Volkswagen Beetle, are almost synonymous to many observers. For years she motored the streets of the greater Harrisonburg area even though she preferred walking to as many destinations as possible. She has been a
resident of Park Place at Virginia Mennonite Retirement Community since
2005.

Gehman has donated the true blue vehicle to the place where she served
with distinction on the faculty for five decades. She taught art and
physical education courses at EMU from 1944 until her retirement in 1987
but continued teaching a watercolor course until 1996. For much of that
time, she carried - and exemplified - the moniker bestowed on her by a
student years ago - "Speedy."

"I wasn't using the car very often these days and decided it was too much
upkeep and not good stewardship to hang on to it," Gehman said. "I have
transportation where I need to go - including Sundays to Gospel Hill
Mennonite Church in western Rockingham County - and didn't want to either
cause an accident or have someone run into me, so why not give it away?"

In so doing, she also decided to give up her driving privileges. She is
also dealing with some lower back problems.

"EMU has been good to me over the years, and this is another way I can
express my appreciation," said Gehman, a long-time donor to the university
fund and capital projects supporter. She established the Margaret Martin
Gehman Endowed Scholarship Fund to provide financial aid for physical
education and art students.

The VW joined the Martin-Gehman family the same time that Margaret and Dr.
Ernest G. (E.G.) Gehman were joined in marriage on July 27, 1967 at
Mennonite World Conference being held in Amsterdam, the Netherlands.
Dr. Ernest Gehman, a widower, was professor of German at EMU and was
already in Germany doing family research before they wed.

E.G. Gehman bought the blue "bug" new from the VW factory in Wolfsburg,
Germany the summer of 1967. Margaret thinks the purchase price was around
$1,500.

The couple also had a civil ceremony that Margaret recalled was conducted
in German. "I remember saying 'ja' at the appropriate times," she smiled.

The couple returned to Ernest's home on Hillcrest Drive in Park View.

"Ernest was the principal driver at first," Gehman said, "but he had
another vehicle so the VW eventually became 'mine.'

The longest trip she remembers taking in the VW was to Oregon in 1969 to
attend Mennonite General Assembly - "Ernest had a son living there at that
time," she noted.

"The car never gave me problems over the years; it held up well going over
mountain roads," Margaret Gehman said. "It was serviced regularly but
never had the engine rebuilt."

EMU development officials are deciding whether to refurbish the car or
put up for sale as is, believing there may be some interest among alumni
and friends of the university in obtaining this symbol of dedicated
service, durability and resolve.

When Margaret Martin Gehman gave the car to EMU, the odometer read 175,000
miles. The car has been around the block a few times, but like its
long-time owner, has more miles (and smiles) to go.

This was a most interesting article. I was at EMC during this time period and had Mrs.Gehman for my Tennis Instructor in College. It was my only A in my college years!

Thanks Jim for a great piece of writing.
Dwight L. Roth