Flowing with the River: Soundings from my Life and Ministry. Sue Clemmer Steiner. Self-published (flowingwiththeriver.com), 2013, 174 pages. 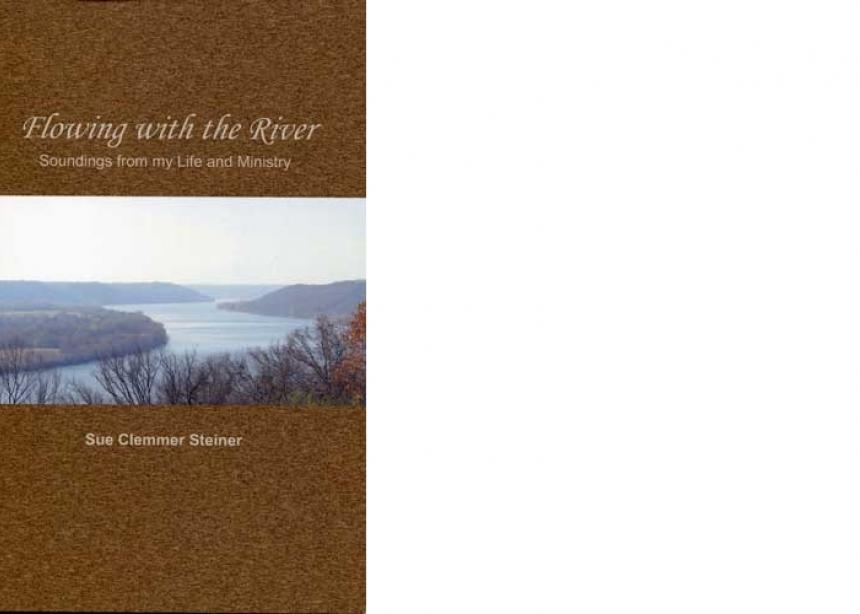 Sue Clemmer Steiner’s recent publication crosses genres within autobiography. It is personal memoir and spiritual recollection. It is reflections on a life in pastoral ministry. It is a historical snapshot of a 1950s eastern Pennsylvania traditional Mennonite community and a Mennonite girl facing the social upheaval of the 1960s. Steiner offers poetry and evocative images. The title, Flowing with the River: Soundings from my Life in Ministry, is apt, as flowing indicates ongoing movement and soundings measure depth.

Ordained to ministry in 1987, Steiner was part of the early wave of women in ministry who pushed open doors for other women to enter. Words from Steiner’s essay titles such as “Churning,” “Plunged,” “Testing,” suggest the struggles and uncertainty, the pain and disappointment that she, and others of this group of women, experienced.

As I read, I found myself returning to the question, “What does it take to grow a minister?” Like most women of that era, Steiner did not set out to be a pastor. Even as she embarks for seminary study she replies, “Certainly not!” when her mother inquires whether she intends to become a minister. Pastoral ministry happens to her later. Yet, in telling her story Steiner reflects on core but unique-to-her aspects of life which shaped her for the minister she became.

The first is a solid foundation. Steiner’s early years seem ideal. She was loved, nurtured, and formed in an environment where for the most part family and church were one. Uncles, aunts, and cousins were ministers, missionaries, and Sunday school teachers. She loved learning, and her questions, even about seemingly stringent Mennonite practices, were taken seriously.

The second is mentors. Steiner is fortunate to have attracted mentors throughout her life—important role models who noticed her, accepted her and encouraged her. These mentors seem to have provided her with confidence and assurance on her journey.

The third is learning to lead. Steiner writes, “During my stint as Record [Goshen College student newspaper] editor during the tumultuous 1967-68 school year, I claimed a voice I still own. I also began to imagine myself as a leader.” And later, “The Record year also afforded me the chance to try my wings as a staff leader, team builder and encourager. Forging a team spirit, making space for others to shine, but also knowing when my own voice needs to be clearly heard—this has always been my best leadership stance.”

The fourth is discovering a theological voice. At seminary Steiner submitted herself “to a text so fascinating and complex it defied all attempts to squeeze it into a linear outline. I understood that it wanted to define me, rather than me defining it.” It was at seminary that “I began to see myself as a person able to think theologically.”

The fifth is becoming a pastor. Steiner reflects not so much on a “call to ministry” as a recognition that she is a pastor. To paraphrase from the Gospel of Luke, “and her eyes were opened” (Luke 24:31). This recognition comes to her while immersed in a crucible of suffering and pain following the tragic deaths of four teenagers. As she listens, preaches, cares, and is present to families, youth and friends, even entire congregations, she recognizes that “somehow, afterwards, I knew in a way I hadn’t before that I am a pastor.”

Becoming a minister is a different matter than staying in ministry. As Steiner lives into the demands, the expectations, the doubts and the joys of congregational ministry she recognizes that sustained ministry requires spiritual depth. She calls it “Staying connected to the Vine.” She writes, “I knew I needed to attend more consciously to my own life of prayer and let God shape my ministry out of it.” Thus begins her journey into contemplative spirituality, and new forms of ministry in spiritual direction and coaching.

Steiner’s experiences are unique to her. Yet her reflections offer a framework for all who minister or who work with beginning pastors to ask not only, “What does it take to grow a minister,” but also “What core aspects of my life have shaped me into the minister I am becoming?”