Standing together with First Nations 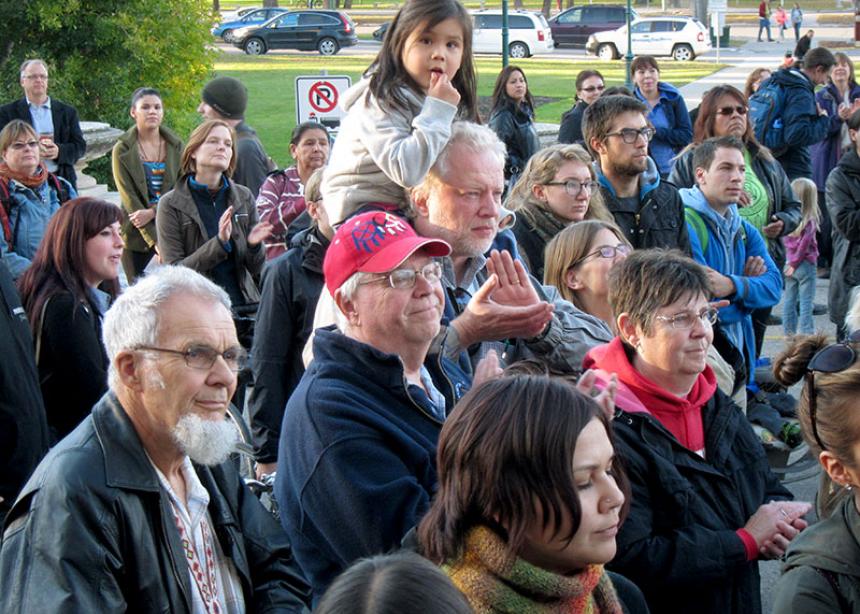 When Moses Falco heard the words, “We never gave up our sovereignty,” at an Oct. 7 rally held in Winnipeg to mark the 250th anniversary of the Royal Proclamation of 1763, they struck a chord. “I realized that I, by the way I continue to live, am not just suppressing a people, I am suppressing nations in my own country. I’m not okay with that.”

With a variety of guest speakers, songs and drumming, the rally drew attention to the centuries-old document signed by King George III that entrenched native sovereignty and laid down rules for land negotiation between First Nations and the government that have long been ignored by politicians of all stripes.

The rally took place on the Manitoba Legislative grounds. Niigaanwewidam Sinclair, an Associate Professor of Native Studies at the University of Manitoba, served as master of ceremonies. A diverse group of people attended, including political leaders such as Derek Nepinak, the Grand Chief of the Assembly of Manitoba Chiefs, former MP Judy Wasylycia-Leis, City Councillor Ross Eadie, and Dougald Lament, official contestant for the Manitoba Liberal leadership race.

In a conversation after the rally, Sinclair noted Mennonite support at other First Nations events. He expressed his gratitude to the Mennonite community for standing together with First Nations people in their efforts to reclaim their rightful status on the land.

Tim Froese, Mennonite Church Canada Executive Minister, Witness, recited a summary of what he heard from other speakers. “We need to undo the myth that Canada is a free and fair country. People need to learn the history that never made it into our textbooks. The Royal Proclamation means something and it needs to be translated into a plan of action.”

Reflecting on the rally, Falco, a part-time communications student at Canadian Mennonite University, says that he was inspired to learn more and that something needs to be done to heal the relationship between settler society and host peoples. He was one of 250 to 300 people at the rally, and works part time as a videographer and graphic designer for Mennonite Church Canada. 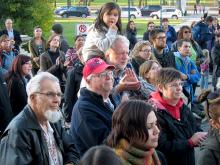