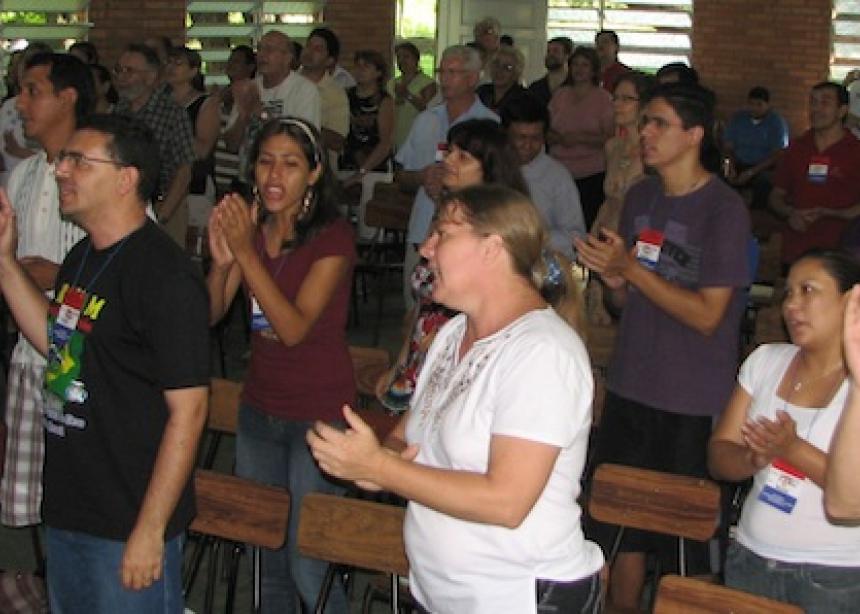 Some 170 participants gathered at Rancho Alegre, a retreat centre jointly owned by five Paraguayan Mennonite national church conferences, 45 kilometers (30 miles) from Asunción, the capital. Traveling from Argentina, Brazil, Uruguay, Bolivia, Chile and within Paraguay, most belonged to member churches of the Mennonite World Conference (MWC).
Werner Franz, director of the Centro Evangélico Menonita de Teología Asunción (CEMTA) introduced the theme by describing five distinctive practices of the Christian church, related to pastoral ministry.
“The church is an earthly community. It is not heavenly,” said Franz. “These five practices are not based on a systematic theology” he explained, emphasizing that they are rooted instead in practical theology. “If we want to introduce Jesus to people we can say, ‘Come to my church and see him.’”
A pastoral ministry thus grounded, Franz told the participants, promotes and forgives; it is creative—training people to think in new directions and allowing participation in God’s work; it seeks to break down barriers and to create a corporate identity; it empowers, gives confidence and demands accountability; it knows that God expects and respects decisions.
Three church leaders presented examples of different pastoral models. César Melgarejo of Paraguay spoke of pastoral ministry that extends over a longer period of time, in one place. Edgardo Sanchez of Argentina explored pastoral teams. And Beatriz Barrios of Uruguay presented on women in pastoral ministry.
Olga Piedrasanta of Guatemala, coordinator of the Movement of the Latin American Anabaptist Women Theologians shared on the pilgrimage of Latin American women and introduced the newly published study guide,El mensaje liberador de Jesús para las mujeres hoy (The liberating message of Jesus to women today).
The book contains reflections and presentations from the 2009 Assembly of Mennonite World Conference (MWC) in Paraguay, as well as eight Bible study guides produced by Latin American women. Piedrasanta, editor of the study, expressed hope that it would “contribute to a more just and equitable world for men and women engaged in building the kingdom of God here and now."
Also on hand at the gathering were MWC executive officers who had been in Asunción for meetings. President Danisa Ndlovu of Zimbabwe brought greetings and expressed appreciation for demonstrations of solidarity from Latin America. Vice-President Janet Plenert of Canada and General Secretary Larry Miller led a time of sharing on relationships between MWC and member churches.
Youth were also involved in the sessions and organized the Saturday evening worship.
At the closing service on Sunday, Juan Angel Gutiérrez of Argentina proclaimed, “God has a purpose for our community: unity in diversity. United in Christ we are one, because we have one Lord, even though we live far from each other, and in spite of our differences.” The celebration of the Lord's Supper reflected the spirit of World Fellowship Sunday, promoted by MWC.
Over the four days, the participants dealt with a number of business matters:
This year’s gathering marked 30 years since the Congress first convened in 1981, in Argentina. The next gathering will be held in Chili in 2013. Potential topics include: counseling; pastoral care of the minister’s family; restorative justice; and the theology of hymns we sing.
– Feb. 17, 2011