Sommerfeld Church pulls out of MCC 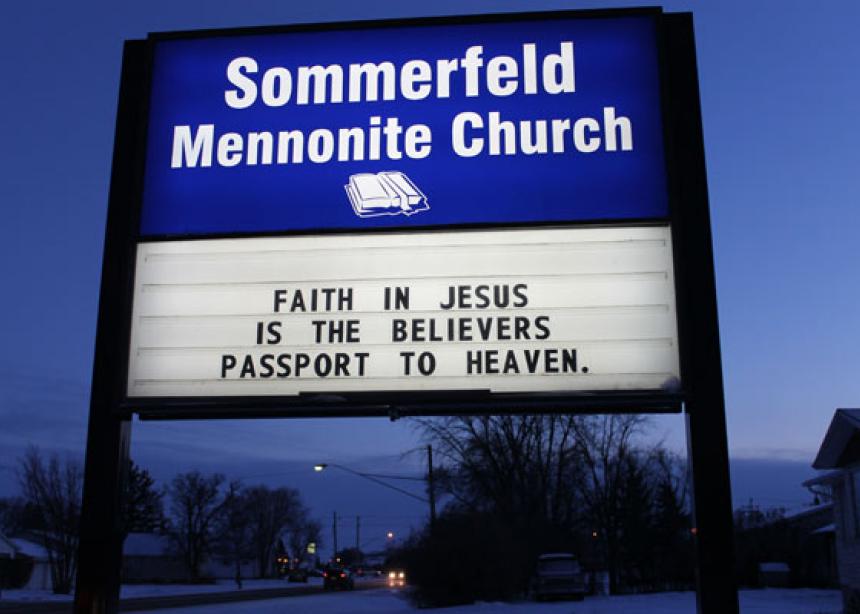 At a Brotherhood meeting in Altona, Man. last November, the Sommerfeld Mennonite Church decided to withdraw as one of the member churches of Mennonite Central Committee (MCC). The church—made up of 13 congregations, all in Manitoba—will no longer appoint representatives to the MCC Manitoba and MCC Canada boards.

Sommerfeld bishop David Wiebe of Winkler did not respond to a request to comment but according to MCC Manitoba director Ron Janzen, who met with Wiebe and others Sommerfeld leaders following their decision, the reasons cited for leaving were MCC’s co-sponsorship of a 2009 Nurturing Healthy Sexuality conference—which they viewed as too biased in favour of accepting homosexuality—and MCC’s adoption of the Mennonite World Conference’s “Shared Convictions.” That statement says “God is known to us as Father, Son and Holy Spirit . . .” Sommerfeld leaders object to the phrase “known to us” as not definitive enough.

Though MCC was not invited to attend the meeting at which the decision was made, the two sides have had a series of meetings since about 2006. A broad range of additional concerns about MCC were raised at these meetings, including MCC’s critique of Israeli treatment of Palestinians, its lack of evangelistic activity, its engagement in environmental issues, its political engagement, its relationship to the United Nations, and its posture toward people of other faiths, including participation in interfaith dialogue with Muslims.

Many of these concerns are encapsulated in the criticism that MCC is “too political” and in a simple question, one that Sommerfeld officials have put bluntly to MCC leaders in the past: Do you believe Jesus is the only way?

Despite efforts on the part of MCC to keep the Sommerfeld Church in the MCC fold—including the unusual move of amending MCC Canada bylaws to include a trinitarian confession, in an effort to address concerns about the “known to us” wording—the tension proved too much.

“The great thing about MCC is the fact that it has been one of the broadest tents in the Mennonite constituency,” says Ron Janzen, who took over as MCC Manitoba director in September. The fact that that tent just got smaller disappoints him. “We’re saddened for sure,” he says.

The Sommerfeld concerns closely mirror issues raised by Carl Teichrib, a researcher and author from Plumas, Man. In 2003, Teichrib, who is of Mennonite background, scoured MCC materials and wrote a report critical of the organization. This report, which he later extended to 103 pages, has circulated among Sommerfeld members. The report warns that MCC’s involvement with the UN brings it in line with sinister, unbiblical efforts to create a global government. It is also highly critical of MCC’s work in Israel-Palestine, which Teichrib sees as pro-Palestinian and unbiblical.

Teichrib made a presentation to the Sommerfeld ministerial in 2009 about MCC, though the extent of his influence over their decision is not clear.

Peter Rempel, who was the director of MCC Manitoba during most of the period of dialogue with the Sommerfeld church, says the church has “discovered a zeal for being biblical and evangelical.” Given this, when it started getting reports that MCC was not as biblical or evangelical as they thought it should be, that raised serious questions for them.

Rempel also notes that certain statements that appeared in MCC materials were not easily defended, such as a prayer addressed to Mother Earth in the Earth Trek devotional materials and a statement that Jews, Muslims and Christians all worship the same God. While members of the three faiths do worship “the God of Abraham,” he questions whether MCC should have spoken so categorically on behalf of all three faiths and on a matter over which only God has authority.

The Sommerfeld is not the only church asking questions. The Reinland, Chortitzer and Old Colony churches have also pushed MCC on some of the same issues in recent years. Around 2008, the Old Colony Mennonite Church informally withdrew from MCC. While they no longer appoint board members, they are still legally a member church, and their members continue to volunteer at MCC thrift stores, relief sales and meat canning events.

Sommerfeld leaders told Janzen they will leave decisions about such involvement up to individual members of their churches. Sommerfeld members make up a key part of the organizing group for the Morris Relief Sale, the longest-running MCC sale in Manitoba.

Janzen says that if the Sommerfeld leaders ever wish to reverse their decision, “their chair at the table continues to be open. We keep that hand extended to them.”

What a terrible tragedy. I thought Mennonites were over the silly ways of splitting off when we didn't agree on something? I sincerely hope that the Sommmerfelder's will reconsider this decision, and rejoin MCC.

So we are supposed sit quietly and ignore what's going on. If MCC doesn't straiten up they will lose more and more Churches. If they keep pushing the global warming agenda, and homosexual agenda.

Hooray for the Sommerfelders to seperate themselves from the apostate Mcc. Having a form of godlines but denying the Power Thereof, this is Mcc having a front that looks Godly but sneekily Morally corrupt.