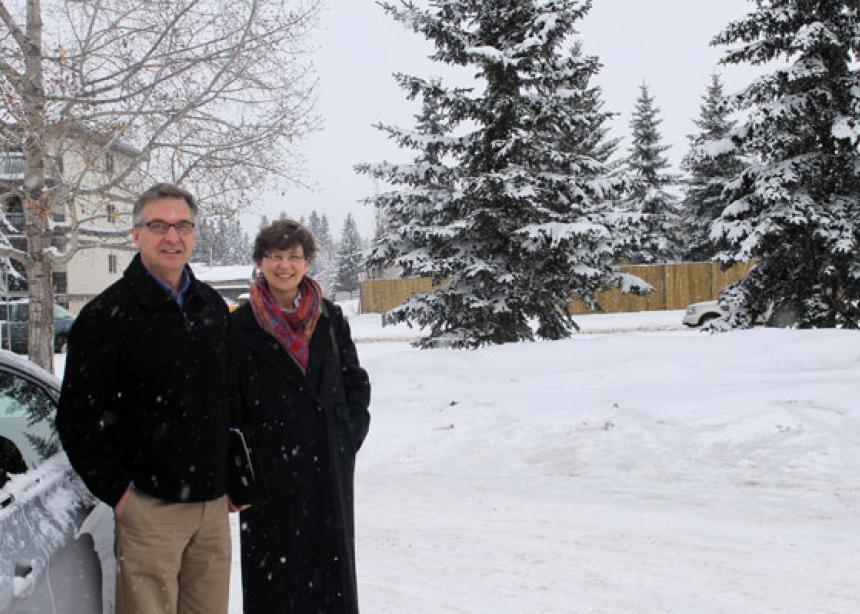 Cheryl Pauls (right), president of Canadian Mennonite University and Terry Schellenberg, vice-president external, were among those who attended the Mennonite Church Canada leadership assembly in Edmonton where winter came early. They also met with pastors, parents and students in Edmonton and Calgary during their trip.

A blast of winter welcomed Mennonite Church Canada leaders to Edmonton’s First Mennonite Church for the annual fall leadership assembly Nov. 7-10. Most travellers managed to be on time, and laughter about inadequate footwear, lack of coats, and snow-covered signs was common fodder at coffee break.

Fall leadership assembly brings together MC Canada staff and general board, area church moderators and ministers, as well as the three councils—engagement, formation, and witness—to discuss issues and do the work of the national church between assemblies. Since moving to a biennial schedule, 2014 will be the first summer in with no assembly. Communicating with the delegate body is a priority for the General Board, and annual area church assemblies and the updated MC Canada website were noted as important places for this to occur.

Friday morning sessions included enthusiastic endorsements of the July 2012 assembly held in Vancouver. The assembly, which limited business sessions and focused on Bible study, was well received. Chief Administrative Officer, Vic Thiessen, said he was; “excited about the young adult engagement at the 2012 assembly.” Approximately 40 young adults took part in the study assembly and Thiessen felt their responses were highly positive. The success of the study conference spurred the Faith and Life committee to propose significant times of study for Winnipeg in 2014. The General Board affirmed keeping business sessions brief and scheduling study for a weekend to encourage attendance. A theme of healing, arising from a prayer project using Matthew 8-10 was also affirmed by the board.

Canadian Mennonite’s warning from the Canadian Revenue Agency, reported by the Canadian Broadcasting Corporation that morning, raised issues of free speech as well as the magazine’s relationship to MC Canada. Rudy Dirks, chair of Witness, said: “Canadian Mennonite is not the same as MC Canada; at a meeting last year we expressed concern about CM not speaking for us. Whereas this is an interesting article, it’s not reflecting on MC Canada. Question of CM whether it crossed the line isn’t [the general board’s].” The board agreed to send a letter to the CM board of directors, asking for clarification of the issue.

The “Being a Faithful Church” process, intended to build capacity for discernment on all issues facing the church, is ready for another round of hearing from congregations. This is the next feedback tool plan for the next phase, moving into the part of the exercise to address sexuality issues. Feedback from congregations is crucial in determining what will be discussed. The board acknowledges that, although much good work has occurred, there are still misconceptions around what the BFC process is. Rudy Baergen, chair of the Faith and Life committee commented; “[I am] concerned if congregations jump into the process when we talk about issues without doing the study first.” Currently, Canadian Mennonite is publishing a series of articles to help churches understand the process.

MC Canada expects a balanced budget this year, however, the news is mixed because balance is achieved through the under-expensing of programs, notably Witness. Randy Wiebe, Chief Financial Officer, reported that while congregational giving is on track, donations from corporations and individuals is down, resulting in a shortfall of approximately $98,000 at the end of October. “We’ve been talking about this trend since summer assembly; it’s the trend that’s worrying us at this point in time.” Wiebe said.

Executive Director, Willard Metzger, takes the trend seriously and says that we, “can’t sustain our status quo in the next years.” The board gave consensus to a task force proposal to look at the MC Canada system to consider adjusting it to fit current realities and fulfill its mission. Naming what the national church does that congregations cannot do is a key part of the task. Vince Friesen, chair of Engagement, cautioned against negativity saying, “[we] are not just dealing with a downward spiral, but the excitement and hope to make a healthier system.” General Board vice-chair, Aldred Neufeldt added, “it’s a good time to do this thinking when there isn’t an immediate need to respond to financial crisis.”

A proposal to suspend the July 2012 decision to adjust the fiscal year end was affirmed by the general board. The adjustment, meant to enable better planning by situating the four months of greatest giving at the beginning of the year, has proven immensely difficult to implement because of a deficit that would result in a short fiscal year. MC Canada staff will continue to work with the situation. If needed the decision may be brought back before the delegate assembly in 2014 for reconsideration.

Cheryl Pauls (right), president of Canadian Mennonite University and Terry Schellenberg, vice-president external, were among those who attended the Mennonite Church Canada leadership assembly in Edmonton where winter came early. They also met with pastors, parents and students in Edmonton and Calgary during their trip.