Should Mennos cheer for fighter Jets?

Say NO to the logo 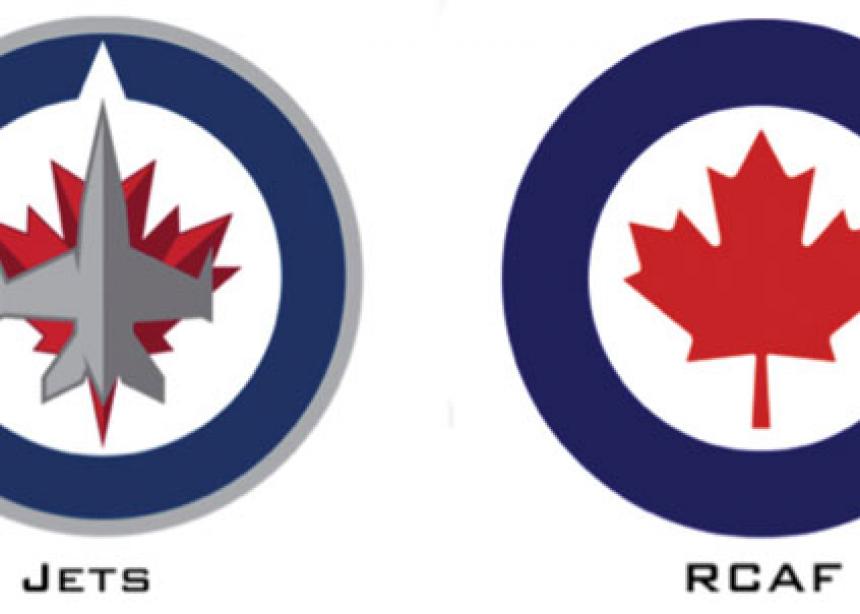 Canadian hockey fans have a reason to celebrate. Fifteen years after the last NHL game was played in Winnipeg, Man., the league is coming back to the city. With other teams having financial difficulties and unstable ownership, fans across the country are seeing realistic chances that in the coming years even more teams will be coming north. It truly is a good time to be a Canadian hockey fan.

But what about a Mennonite hockey fan?

After almost two months of waiting to see what the new Winnipeg logo would look like, True North Sports and Entertainment, the owners of the new Winnipeg Jets franchise, revealed the team’s logo. It has taken a slight modification of the emblem used by the Royal Canadian Air Force and overlaid it with a fighter jet. As a Mennonite, I find this troubling, but not really surprising. Glorification of the armed forces isn’t new to Canadian hockey culture.

Over the past 10 years, it has become harder and harder to watch Don Cherry on Saturday nights during the first intermission of the games. Hockey has been his life, and he does know a thing or two about the game. In addition to talking about the game and general hockey news, he points out safety problems for the players and often addresses problems with the game before many others catch on.

But sometimes Cherry ignores hockey all together and goes on pro-military rants, which seems more and more common. For every hockey clip he shows, there’s a shot of soldiers, guns out, climbing on one of their armoured vehicles in the desert.

It may be easy to applaud the CBC for reprimanding him—and introducing a delay to his formerly live segment—after he voiced his support of the U.S. invasion of Iraq in 2003. Ultimately, though, the CBC still seems to support him and allows his nationalistic displays during its six-hour Hockey Night in Canada double header broadcasts, which are otherwise entirely about hockey, except when the game has a pregame ceremony to “honour the troops.”

This past July, Brian Burke, general manager of the Toronto Maple Leafs, made sports headlines with a trip to Afghanistan. The news wasn’t that he was visiting the soldiers, but that he was gone at the same time as player contracts expired and teams had the chance to sign new free agents to new contracts. July 1 is one of the most important days of the year for an NHL general manager, and yet he was essentially on vacation. He viewed supporting Canadian troops in Afghanistan as more important than doing his job, and is in charge of an organization that many of us support.

So in a culture like this, is it really any surprise that the new owners in Winnipeg chose to go with a logo that seems more about the air force than a hockey team? How do Mennonite hockey fans support the game they enjoy while it works to undermine their personal beliefs?

The solution seems to be to choose carefully who you are going to support. If you want to buy a team jersey or other merchandise, maybe choose a team with less militaristic themes. If you still want to cheer for one of these many teams, but feel you can’t under current circumstances, let them know why. If enough people tell a business how it can get their money, they’d be foolish not to change.

In the case of a certain outspoken broadcaster, the same tactic can work. Tell the network and sponsors—Moores Clothing For Men often sponsors Coach’s Corner— that you don’t support the content, and don’t want to support its supporters either.

We can still be hockey fans, but if things continue going in the direction they are, it soon may be impossible without feeling like a hypocrite. Which is more important in choosing a team to cheer for:

Dan Swartzentruber is a young adult member of Erb Street Mennonite Church, Waterloo, Ont. A graduate of the University of Waterloo with a major in computer science and a minor in Mennonite studies, he is currently living in Toronto and looking for employment.

I would add to Phils' list the OHL teams, Brampton Battalion, Owen Sound Attack and in my neck of the woods the Windsor Spitfires. According to Dan Swartzentrubers' logic we should shun these teams and all that they are associated with as well.

I've been a fan of hockey and watching for twice as many years as Mr. Swartzentruber has been alive. The game, and I emphasize game, no more glorifies violence, the military or other antisocial behaviours now than it did fifty years ago.

We may well live in a world where violence is easily viewed or accessed on the internet but there is only one caveat here. If our children are learning how to interact with and be productive members of society by what they see on TV, playing video games or watching YouTube and not by what they are being taught by their parents and in their churches, then we as Christians and society in general truly are in trouble. That family and the church are taking a back seat to social media, organised sport for children, computer games and the like is what is really troubling and not what goes on on the ice.

Hockey is a game. Lighten up and let's keep it all in perspective.