Sharing what they have gained 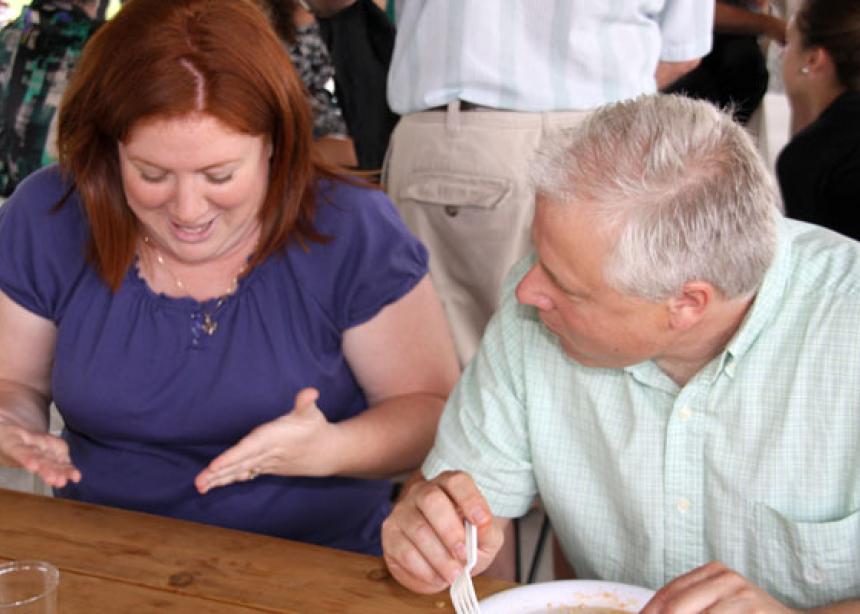 The way Ken Bechtel, Wanner Mennonite Church historian, puts it, the “175” in this year’s celebration refers only to the construction of the first dedicated church building. The congregation had been meeting since around 1800, as several Bechtel families settled in the area, having left the United States, where they did not trust the revolutionaries’ commitment to allow for conscientious objection to war. These were among the earliest European pioneers in Waterloo Region in southwestern Ontario.

The church formed in 1837 when a small white brick church at the southwest corner of Beaverdale and Maple Grove roads, on land donated and deeded to the church by Henry Wanner Jr. for a church and cemetery. That building served the congregation for just over a century, when it was replaced by the present brown brick building in 1938. An educational wing was added in 1969.

Those who spoke of congregational joys and needs during the June 24 anniversary service indicated over and over that the church has a history of welcoming visitors and people who are new to the community. Testimonies spoke to invitations, warm welcomes and continuing support of new neighbours in the community.

For more than a century, children from the surrounding community have been welcomed to Sunday school, and since 1933 a week or two of Vacation Bible School has been held for all children in the community.

The anniversary service was bittersweet, however, as Don Penner, pastor for almost 11 years, is moving on to Shantz Mennonite Church, Baden, Ont. At the same time, pastoral intern Christina Edmiston also completed her term and will take up duties at First Mennonite Church, Kitchener, this fall. Mike Thiessen, Wanner leadership team chair, and team member Marg Strom both spoke highly of Penner’s work over the years, helping the congregants to learn to communicate more openly with each other, and to share that openness and mutuality with others in the community.

Lester Bechtel of the spiritual care team noted that, as in many other congregations, many of Wanner’s young adults go off to university elsewhere and do not return, giving the feeling to some of a “dwindling church.” He hopes for a turn-around.

“A dance between connecting with love and respect, on one hand, and welcoming new people who may not have Mennonite roots,” is the desire of Helen McDonald, a member of the spiritual care team. She noted that the image of a dance, perhaps foreign for many Mennonites, was the way Penner and Edmiston had put it in recent sermon series.

The celebratory service featured the leadership of Ken Bechtel, who grew up at Wanner and has pastored all over Canada. Former pastors Herb Shultz and Eric Rempel also took part. The day culminated with an old fashioned potluck picnic, games and activities in the church picnic shelter.