Seduced by our abundance 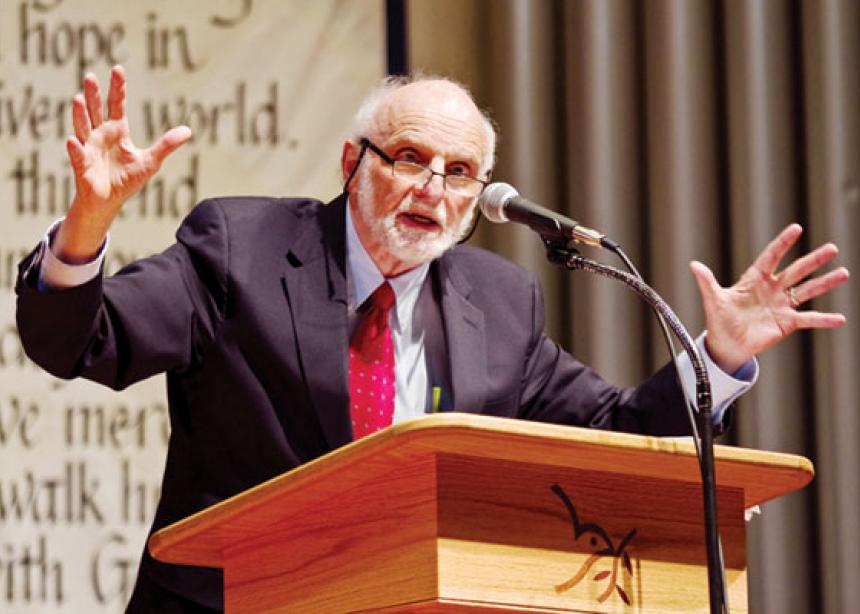 Walter Brueggemann inspires School for Leadership Training participants to move beyond the drive to accumulate toward accepting God’s gracious abundance.

Beware of seduction by accumulation. That was one of the money issues explored by Walter Brueggemann, a world-renowned Old Testament scholar, in talks to as many as 700 people gathered at Eastern Mennonite University (EMU) Jan. 16 through 18.

“The narrative of accumulation dominates our society and it is enormously seductive,” he said.

Using Pharaoh, Solomon, and the parable of Jesus about the rich man who tore down his barns and built bigger ones, Brueggemann demonstrates that this narrative only leads to death, both the death of the wealthy individual and the death of the poor.

Brueggemann said God is the source of all bounty, including food, and thus is the central player in  the narrative of abundance.

“Moving from scarcity to abundance depends on understanding that the world is God’s creation, not a system of zero-sum economics,” Brueggemann said. He called on his listeners to practice their faith by living gratefully instead of anxiously.

The accumulation narrative and the abundance narrative are “deeply contradictory,” said Brueggemann. Yet most people try “to juggle them and hope no one notices.” Brueggemann called on the church to do “more truth-telling about the deathliness of the [accumulation] system,” even if the church’s stance is called unrealistic by many. “The gospel is fiction when judged by the empire, but the empire is fiction when judged by the gospel.”

In his Jan. 18 talk, Brueggemann said that practicing Sabbath is one way to move from accumulation to abundance. “Sabbath is a deliberate, disciplined pause in the narrative of accumulation,” said Brueggemann. “We are most imitating God when we trust creation enough to rest.

“A society that does not practice Sabbath is a society of depleted selves. And the less self I have the more I want to surround myself with signs and symbols of value to keep persuading myself that there is something good going on in my life even if it is relatively empty at the center.”

Walter Brueggemann inspires School for Leadership Training participants to move beyond the drive to accumulate toward accepting God’s gracious abundance.