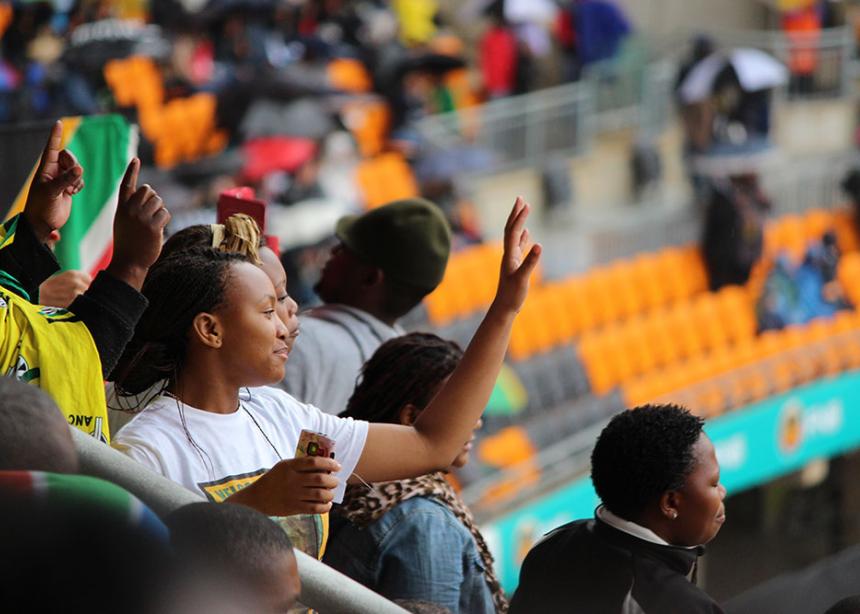 Three hours before the memorial service for Nelson Mandela began, people gathered to honour their beloved past-president and peacemaker in a celebratory manner. The gathering included singing, dancing, clapping and shouts of ‘Mandela ,you’re my president!’

After a lifetime spent struggling for the emancipation and equality of all, Nelson Rolihlahla Mandela can finally rest, his long walk at an end. “Madiba,” as he is affectionately known, passed away on Dec. 5, 2013.

Five days later, a memorial service was held in Soweto to honour him. Madiba’s is a story of tragedy and triumph. Indeed, his story and the story of South Africa are inextricably intertwined. Now the world could say goodbye. His immense contribution to the birth of the new South Africa and the powerful example he set for the world were remembered and honoured.

Despite relentless rain,  people from all backgrounds and from around the world attended the service. As we splashed through the puddles towards the stadium with our two children, the sound of thousands of voices singing drifted through the air. This was a full three hours before the service started.

The atmosphere was celebratory. Old struggle songs rang out. People draped themselves in flags, feet danced and hands clapped. As one, the  immense crowd sang, “Mandela, you’re my president!”

Those three hours were the memorial of the people. This was their final goodbye, paying homage to a man who inspired a nation, and indeed the world, with his selfless pursuit of a just society for all.

When the formal service began, dignitaries and leaders from around the world gathered to add their voices in paying respect to Madiba.

Awe was repeatedly expressed at his ability to emerge from 27 years in prison without seeking revenge on his oppressors. Somehow his crucible of suffering encouraged a reconciliatory spirit. He sought forgiveness and reconciliation with everyone, even with those who enacted and enforced the apartheid system.

Mandela’s ability to bring together unlikely people because of this reconciliatory spirit continues even in his death. The service included prayers by several South African religious leaders: one Jewish, one Hindu, one Muslim and one Christian. U.S. President Barack Obama shared the podium with Raul Castro, president of Cuba, a long-time American adversary. Thabo Mbeki and Jacob Zuma, rivals for leadership of the African National Congress, also shared the stage. In addition, the stadium was packed full of people representing South Africa’s rainbow nationhood of people, those who once were separated now united in their desire to say goodbye.

While Madiba’s walk has come to an end, he initiated a new journey of unity in diversity. This journey towards true justice, true peace and true reconciliation is far from over. The challenge was set to live up to his tireless example and to walk this road together.

Three hours before the memorial service for Nelson Mandela began, people gathered to honour their beloved past-president and peacemaker in a celebratory manner. The gathering included singing, dancing, clapping and shouts of ‘Mandela ,you’re my president!’

Andrew Suderman, left, director of the Anabaptist Network in South Africa, and his daughter Samantha attend a memorial service for Nelson Mandela on Dec. 10, 2013, at the First National Bank Stadium in Soweto, near Johannesburg. Seated next to them, from left to right, are: Suderman’s brother, Bryan Moyer Suderman, his son Matthew and wife Julie.