MC Canada's Karen Martens Zimmerly invited AMBS to bring its “tent of wisdom and come to some of our neighborhoods.” 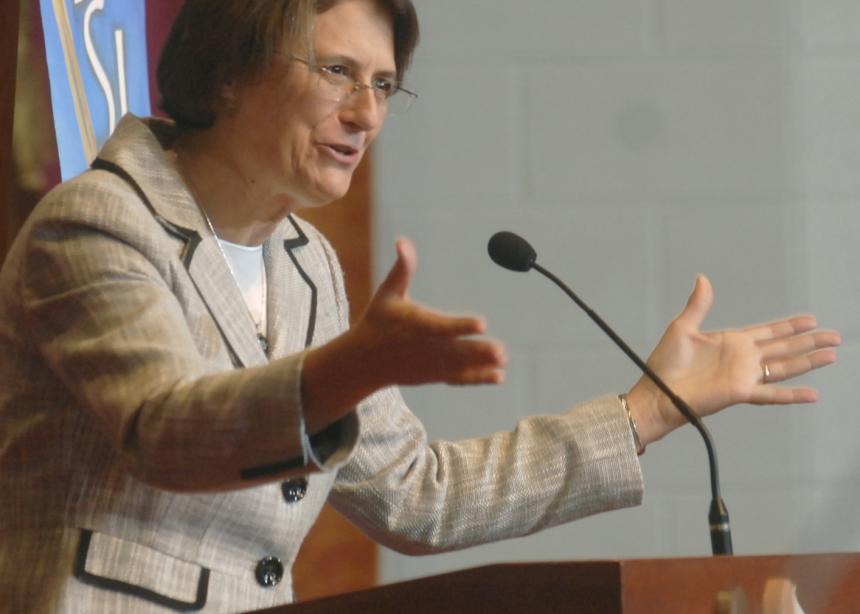 “Salvation belongs to our God who is seated on the throne, and to the Lamb,”

the congregation called out, led by Sara Wenger Shenk in her inaugural address as the new president of Associated Mennonite Biblical Seminary, on Sunday, Oct. 24 at Clinton Frame Mennonite Church near Goshen.

“We have good news to share—the good news of Jesus Christ—with love and forgiveness and justice for all,” Wenger Shenk said.

In her address, she briefly outlined the history of AMBS, emphasizing the integration of the seminaries of two Mennonite denominations. Noting the work of strong church leaders of the past, she said, “We are now urgently called to imagine the shape of the future. The people we serve are pulled hither and yon into increasingly fragmented loyalties. It is the church and its leaders who, when they are well equipped, call us back to the one thing that is all important—our allegiance to God revealed in Jesus Christ, made known to us by the Spirit.”

The work of the seminary, as Wenger Shenk described it, is three-fold:

Wenger Shenk’s address followed a message from Karen Martens Zimmerly, denominational minister and director of leadership for Mennonite Church Canada. Framing her message with the opening verses of the Gospel of John, Martens Zimmerly noted that Jesus, “as a dual citizen of God’s kingdom and God’s creation … pitched his tent and planted himself in a diverse variety of neighborhoods.”

She invited AMBS to bring its “tent of wisdom and come to some of our neighborhoods.” She described church planting work among Spanish-speaking newcomers in French-speaking Quebec and noted a Hmong congregation on the west coast which is the latest congregation to join the denomination. These and other communities, she said, are imagining and experimenting with new ways of being the presence of God’s grace and truth in the streets and neighborhoods.

The afternoon service also included a commissioned hymn by Jim Clemens, a member of The Table, an experimental congregation in Harrisonburg, Va., that Wenger Shenk and Gerald Shenk, her husband, helped to establish. Using a text based on Psalm 90, Clemens wrote a musical setting called “Grapevine,” reflecting the practice of the congregation to make its own grape juice for their weekly celebration of Communion.

The commissioning of Wenger Shenk was led by Randall Jacobs, chair of the AMBS board, and Jane Thorley Roeschly, board member. Carlos Romero and James Rosenberger, representing Mennonite Education Agency, led a commissioning of the gathered church.

Wenger Shenk received several gifts as symbols of her leadership. A ceramic Communion service set, still to be commissioned, was announced, honoring her commitment to make the celebration of Communion a central part of worship. She also was wrapped in a prayer shawl, created for the AMBS president at the time the previous president, Nelson Kraybill, was inaugurated in 1997. The shawl was woven of strips of linen on which prayers from people across the church were written. In addition, AMBS board member from Winnipeg, Man., Kathy Koop, gave Wenger Shenk a hockey stick as a reminder that AMBS serves both Mennonite Church Canada and Mennonite Church USA.

Wenger Shenk assumed the role of president on October 1, following three months of preparation. Previously she had served as interim dean and associate dean of Eastern Mennonite Seminary, Harrisonburg, Va. At EMS, where she taught for 15 years, she also served as associate professor of Christian practices.

Wenger Shenk’s scholarship includes Thank You for Asking: Conversing with Young Adults about the Future Church (Herald Press, 2005), Anabaptist Ways of Knowing: A Conversation about Tradition-Based Critical Education (Cascadia, 2003), Coming home: A thoughtful resource for fathers, mothers, and the rebirth of the family (Good Books, 1992) and Why Not Celebrate! (Good Books, 1987). Her dissertation is Toward an Anabaptist Educational Theory, presented to the faculty of Union Theological Seminary and The Presbyterian School of Christian Education in August 1998. Wenger Shenk has been a frequent contributor to The Mennonite and other publications, including Mennonite Quarterly Review, Leader Magazine, Vision, and Sojourners. She serves as a member of the MC USA Binational Worship Council.

From 1977 to 1983 and again from 1986 to 1989, Wenger Shenk and her husband served on a study-service appointment with Eastern Mennonite Missions and Mennonite Central Committee in the former Yugoslavia. While there, she studied Croatian language at the University of Zagreb. 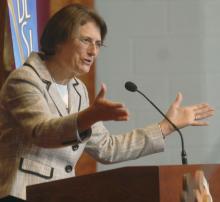