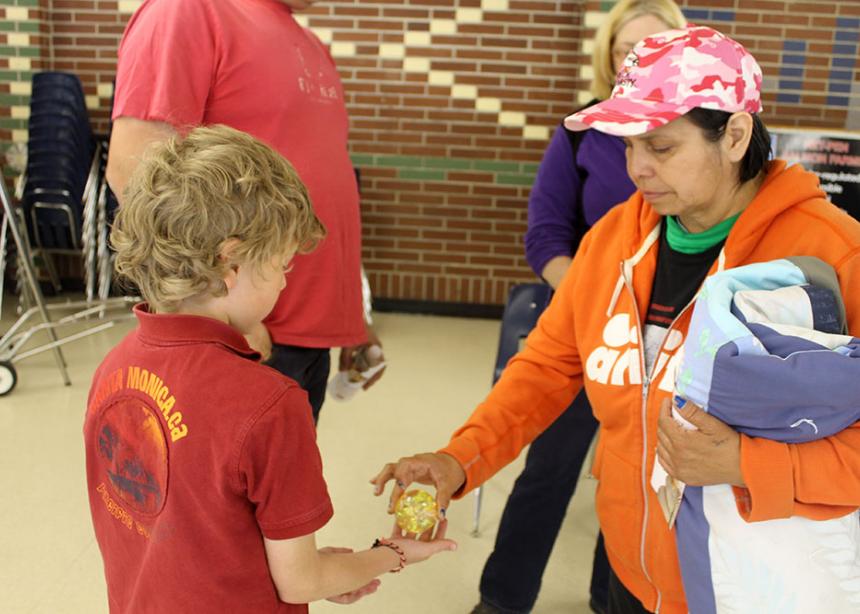 Cheryl A. (Francis) Peters, right, holding the MCC blanket given her, in turn gives Forrest Johnstone a sparkling ball she had recently purchased for herself. Peters says she wanted to give one of her possessions to the child.

The former St. Mary’s Indian Residential School in Mission drew 50 Fraser Valley Mennonites on May 10 to hear stories of history and culture by the Stó:lō Nation leadership.

Sponsored by Mennonite Church B.C. and organized by indigenous relations coordinator Brander McDonald, the gathering was part of an ongoing MC B.C. effort to strengthen relationships with local indigenous communities. The participants formed a circle that McDonald called a “sacred place and a sacred space.”

The afternoon began with participants forming a sacred circle and Stó:lō protocols, including a drum song and recognition of the gathering on the territory of the Matsqui First Nation, one of 11 Stó:lō bands.

Elder Geoff Waterfall, now caretaker at the site, told of the history of the St. Mary’s School run by the Roman Catholic Church. St. Mary’s was one of the last residential schools to close in Canada, shutting its doors in 1984.

On a tour of one of the former dormitories, elder Josette Jim talked about the feeling of abandonment she experienced as a five-year-old girl at the school. She told of malnutrition, humiliation and bullying, noting she was not alone in experiencing such abuse. “Everything that happened is someone else’s story too,” said Jim.

Eddie Garner, another elder, talked of the importance of wild salmon to the Stó:lō people from a cultural and historical perspective. Gardner said farmed salmon is endangering the wild salmon and, if left unchecked, could lead to the demise of wild salmon. “We consider the salmon sacred, our relatives. If you want pure fish, don’t go to farmed salmon,” Gardner urged.

MC B.C. representatives Henry Krause and Garry Janzen presented the four Stó:lō leaders with gifts of blankets that had been handmade by Mennonite Central Committee quilters.

In a touching moment, Stó:lō member Cheryl A. (Francis) Peters was moved to give a sparkling ball she had bought for herself to the youngest boy in the room, Forrest Johnstone of Walnut Grove. Peters said she had bought the ball because “it’s round, like the earth,” and gave it to the youngster because it symbolized “healing, letting go and empowerment.”

“We want to continue this kind of dialogue,” said McDonald, who was pleasantly surprised that so many had come for the event. “Our role as MC B.C. is to find ways to relate with aboriginal neighbours. It is incumbent upon the ‘settlers’ to walk the walk and talk the talk.”

Another such event is planned for the fall.

Cheryl A. (Francis) Peters, right, holding the MCC blanket given her, in turn gives Forrest Johnstone a sparkling ball she had recently purchased for herself. Peters says she wanted to give one of her possessions to the child. 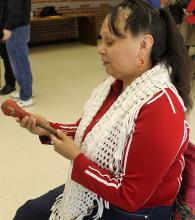 Josette Jim shows a deer-hide shaker her daughter made for her, personalized with the letter ‘J’. Jim is of the Wilmelmex People and comes from Xwewenaqw of the Whonnock Tribe.