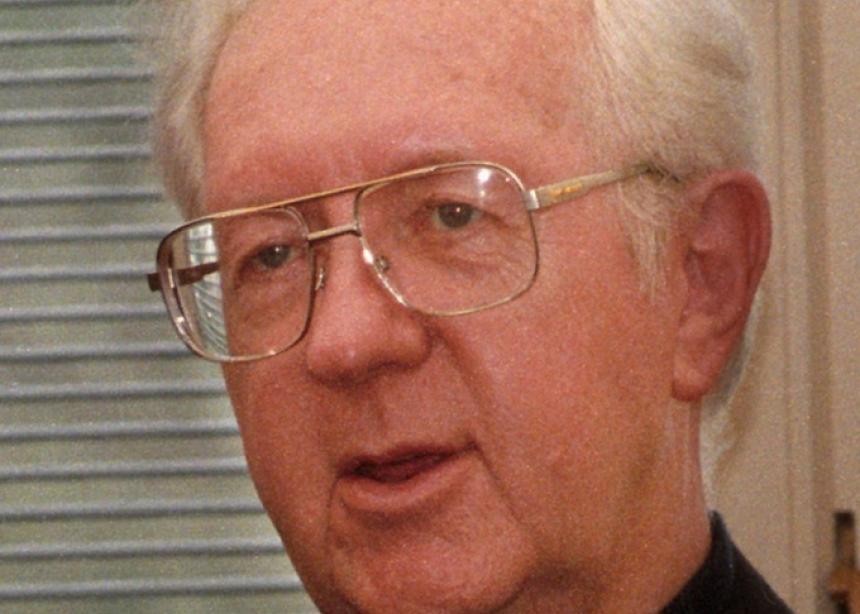 Ross T. Bender, dean emeritus of Associated Mennonite Biblical Seminary, died late Thursday, April 21, in Goshen, Ind. In his 81 years of life, he devoted himself to service and leadership in the Mennonite church, including congregational, denominational and global ministries.

Much of Bender’s service was in seminary teaching and administration. He was professor of Christian education at Goshen Biblical Seminary (GBS), Goshen, Ind., and Associated Mennonite Biblical Seminary, Elkhart, Ind., over a span of 34 years. He also served as director of the Institute of Mennonite Studies toward the end of his tenure at AMBS. He was named dean emeritus of AMBS when he retired in 1996.

Bender was ordained for ministry in 1958 and was pastor of congregations in Waterloo, Ont., and Lansdale, Pa., and was principal of Rockway Mennonite High School before beginning his seminary teaching. From 1961 to 1971, Bender served with the Mennonite Commission for Christian Education, chairing this group from 1963 to 1971. Then during a two-year leave from the seminary, 1972 to 1974, he served as the first executive secretary of Mennonite Board of Congregational Ministries. During a later leave, 1984 to 1989, he was pastor of Glennon Heights Mennonite Church, Lakewood, Colo.

Alongside these ministries, Bender was moderator of Mennonite Church General Assembly from 1981 to 1983 and president of Mennonite World Conference from 1984 to 1990. He also served on committees for the Mennonite Church, the World Council of Churches and the Association of Theological Schools.

Bender began teaching at GBS in 1962. Two years later, both GBS and Mennonite Biblical Seminary (MBS), the two seminaries that formed AMBS, named him as dean. He gave significant leadership to the academic cooperation of the two schools, which led to the move of GBS to join MBS on the Elkhart campus in 1969. The resulting full integration of the two programs strengthened AMBS as a seminary of both the former Mennonite Church and the General Conference Mennonite Church.

Another significant contribution Bender made to the seminary and the church was his leadership of the Dean’s Seminar, a two-year study project from 1967 to 1969 to develop a model for theological education in the Free Church tradition. This project fostered the redesign of how the seminary trained pastors for Mennonite congregations.

This study project came at a time when there was significant ferment in the culture and change in the church, particularly a movement for congregations to have professionally trained and salaried pastors. The study asked basic questions about what form of ministry fits Mennonite congregations and how AMBS can best fulfill its mission to prepare pastors.

Bender guided the committee of six who represented faculty of both GBS and MBS— C.J. Dyck, Leland Harder, William Klassen, Millard C. Lind, J.C. Wenger and John Howard Yoder—through more than 70 sessions, resulting in curriculum decisions that shaped the preparation of students for ministry for the next several decades.

Rebecca Slough, current dean of AMBS, reflected, “Ross led from the deep conviction that the church was a people of God, called, formed and gifted for worship, discernment and witness.” Slough noted that although the church and the culture have changed significantly since the Dean’s Seminar, “its legacy shaped students for a generation and still lingers in aspects of our administrative structure and community life.”

When Bender returned to the role of pastor, “his responsibility as a leader was to help God’s people find the forms of faithful mission and service that seemed good to the Holy Spirit and utilized the particular gifts that the Spirit had granted to the church,” Slough explained.

In all of the professional roles Bender held—pastor, administrator, teacher—he was valued for his strong and sensitive leadership, sincere faith, caring approach and creative thinking. Glenn Leinbach, now of Elkhart, but a former member of Glennon Heights Mennonite Church, said, “Ross was as a pastor who knew who he was (gifts, strengths, weaknesses) and why he was pastoring at GHMC. He was so well grounded in his own walk with Christ that he knew he was at GHMC to serve God and not the congregation per se. Ross was adept at structuring forums that allowed open, issue-related, nonthreatening discussion in the church which helped us move beyond the past hurts.”

Jacob Elias, professor emeritus of New Testament at AMBS, and pastor of Parkview Mennonite Church, Kokomo, Ind., was a student of Bender’s, a colleague on the AMBS faculty, and later dean of AMBS. He commented, “Ross has been faithful in wide-ranging ministries within the church and its corporate life and mission, not only on the seminary campus. Above all I knew Ross as a teacher, focused on discipling women and men for the ministry and the mission of the church in the world.”

A tribute to Bender’s leadership skills came in his nomination to be president of MWC. Larry Miller, general secretary of MWC, noted, “One of the reasons Ross was nominated was that he was thought capable of overseeing a major transition in MWC history—the transition from the first full-time executive secretary to the second one and the move of the MWC general secretariat out of the USA (to France, as it turned out).”

Those who knew Bender appreciated his gentle humor, often turned on himself, and especially his warmth. Leinbach shared that what his daughters remember most about Bender as a pastor was his ready smile.

Wilma Cender, current AMBS student and former secretary for the Institute of Mennonite Studies, remembered, “He always came in the door in the mornings with a smile on his face and always had a great sense of humor. He deeply cared for the Mennonite church and the decisions and issues that the church was faced with at various times. I always enjoyed hearing his input on the issues as I knew his thoughts were wisely biblically discerned.”

The effects of Parkinson disease limited Bender’s involvement in AMBS and the wider church in the last two decades. However, his caregivers noted that he kept up-to-date with developments in the church and was always ready to talk about issues and people he knew.  Slough said, “His love for AMBS ran deep, well past the years of his service to its ministry.”

Bender was born June 25, 1929, in Tavistock, Ont. In 1950 he married Ruth Steinmann; she died in 1997. Surviving are their five children, Ross Lynn Bender and Sylvia Horst, his wife, of Philadelphia; Elizabeth and Jim Barker of Buhl, Idaho; Michael and Alice Bender of Washington, D.C.; Lenore and Stevan Challenger of Camano Island, Wash.; and Anne and Dave Jacoby of Bel Air, Md. Also surviving are nine grandchildren, two great-grandchildren and one brother, Harold Bender, of Stratford, Ont. He was preceded in death by his parents; a sister, Leona Bender; and two brothers, Walter and Orie Bender.

In addition to numerous articles, Bender authored or co-edited several books: The People of God: A Mennonite Interpretation of the Free Church Tradition (Herald Press, 1971), a report on the Dean’s Seminar; Christians in Families: Genesis and Exodus (Herald Press, 1982);  and Baptism, Peace and the State in the Reformed and Mennonite Traditions (Wilfrid Laurier University Press, 1991). In 1997 the Institute of Mennonite Studies published a book that brought together a variety of Bender’s writings,Education for Peoplehood: Essays on the Teaching Ministry of the Church. In 2007 he wrote Tending and mending the creation: My experience with Parkinson disease,which was published by Pandora Press.

AMBS marked Bender’s death by tolling its bell 81 times, once for each year of his life. A memorial service for Bender was held at College Mennonite Church, Goshen, Ind., on Tuesday, April 26, with June Alliman Yoder officiating. 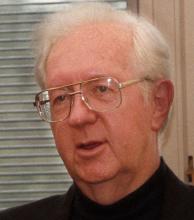 He was a great man. Thank you for a fine story on Ross;s life.