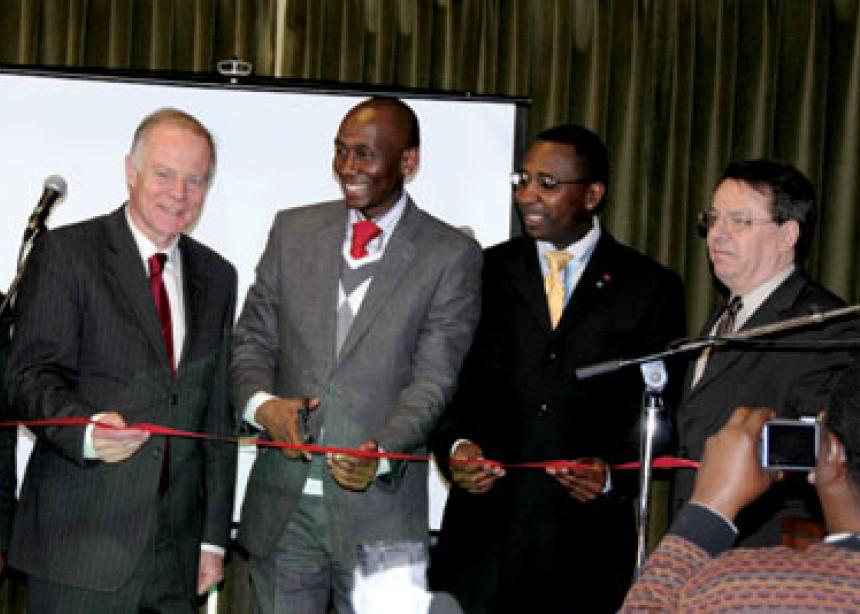 For Serge Kaptegaine, the opening ceremonies for Ref-Nyota, a new business venture that promotes the skills and talents of refugees, was an answer to prayer. The event was held at Le Centre Culturel Franco-Manitobain, Winnipeg, on April 23.

Kaptegaine came as a refugee from the Democratic Republic of Congo in 2005. Always a man dedicated to peace, Kaptegaine, a young soft-spoken French teacher in a Congolese village, was trying to bring rival rebel groups together to dialogue with one another when he fell into the wrong hands.

Friends assisted him in his escape and he was hastily delivered to Winnipeg, with no time to inform his wife and two young children. Once in Winnipeg, the adjustments were many, not least of them being the courage to walk into Home Street Mennonite Church that presented him with a sea of white faces. If it weren’t for the words “merciful peace” that he heard from the pulpit, he says he would have turned and left. But he wanted to hear more.

In 2006, Kaptegaine told Dan Dyck of Mennonite Church Canada, “My country, my people, need this Mennonite message of peace.” He became the coordinator of Hand in Hand for Peace in the Congo, a local Congolese group working to raise awareness of a conflict in their country. At that time Dyck wrote, “His story has just begun.”

While he continues to teach French in Winnipeg, Kaptegaine has never lost focus of the gospel message that promotes love, peace and reconciliation. He is involved with Save the Children in Congo and with War Child Canada, but for the past year most of his energy has gone into building Ref-Nyota.

“All the refugees of war who come to Canada have problems getting jobs that use their skills and talents,” says Kaptegaine. “So far, the new business has worked mostly with refugees from Angola, the Congo and Sudan, but it is not just for refugees from those countries. There is no boundary to suffering.”

Ref-Nyota assists the refugee community to become fully engaged in the Canadian workforce by introducing their products, services and creative strengths to potential employers.

Kaptegaine gave the example of one refugee who came to Winnipeg with his family. He was a tailor and a maker of cloth. He wanted to continue the work he was familiar with, but as it is with so many refugees, “the cultural differences, the language, the stress got in the way,” says Kaptegaine. Ref-Nyota, which means “refugee stars” in Swahili, helped establish “a network of stores to which he now sells his cloth. He is able to work with his wife at home,” notes Kaptegaine.

This new service has also helped musicians find venues where they can perform, enabled one woman to offer African cooking classes, provided legal assistance and helped with publicity for refugees. “There are 14 of us with different skills who are directly involved in Ref-Nyota,” he says, “but indirectly we are more than that. It is amazing to see how the community has responded to this. The Canadian community has a big heart to help people.”

Several years ago Kaptegaine was able to save enough money to help his wife and children move to Germany while they waited for documents to immigrate to Canada. ”We kept in touch on the phone and I visited them in Germany, but my wife got married there,” he says. “It was very hard. Everything was ready, but I am learning to accept.”

On March 18, Kaptegaine became a Canadian citizen. He knows that he will never be able to return to the Congo, but that does not lessen the passion and concern he has for his people, including more than 500 families who have come to Winnipeg.

Kaptegaine continues to attend Home Street Mennonite Church on an occasional basis. “Mennonites have a conviction of peace, but to belong to a particular religion, I avoid that,” he says. “I have seen what religion was able to do and how it divides people. I belong to God. I’m a believer.”

“Because of the evil I have seen people commit, I don’t see God in people, but I try to see people through God’s eyes,” he says, adding, “I try to love because God is love. This continues to keep me strong.”

My name is Seif Nzeyimana I am an asylum seaker currently leaving in The netherlands. I contacted CIC regarding refugee resettlement program and they advised me to look for a sponsor who can sponsor my resettlemnt to Canada. in the process of looking for a sponsor, i landed to your website. I hereby request more information on how to apply and where to get the application forms.
Can you be kind enough and send me the Application forms.

Thanking you in advance