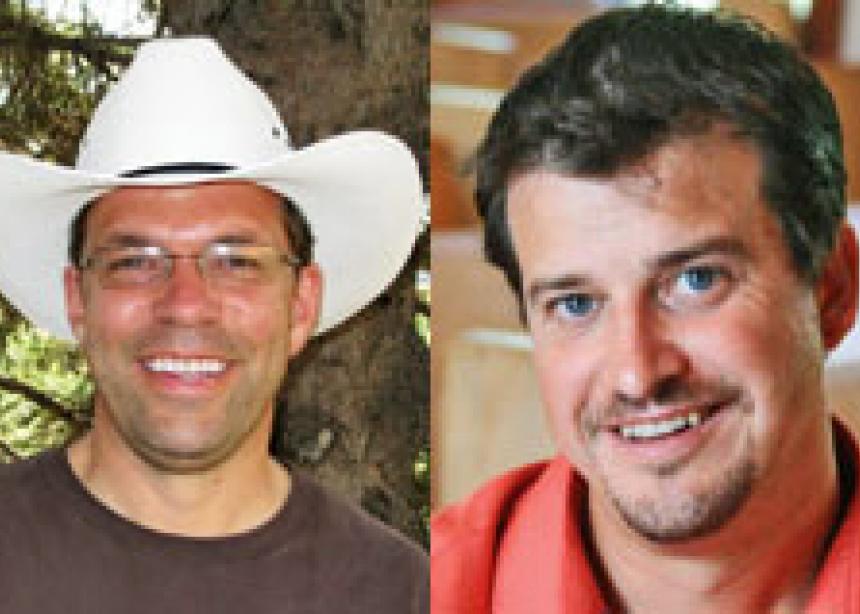 Klassen: If you look through the current music used in our churches, you don’t find much under the theme of “Reclaiming Jesus.” If you do find something, it is often in a “revivalist,” rather than a “missional,” vein. Add to that, we are making an effort to use music from Mennonite church writers at this assembly. Further, we wanted a song firmly rooted in Scripture, rather than in emotion or personal experience.

Miller: I really think that at least some of the music we sing should be indigenous to our local communities and congregations. I think there’s way more songwriting potential and general creativity in our churches than we tap into.

Q: What were some of the challenges/joys as you wrote?

Klassen: As we studied the texts for each of the three evening worship services, we looked to the Scripture verses and stories that preceded each of them. If you look at the song’s second verse, for example (see sidebar), you will notice references to John 2-6 in the first four lines. The text for [one of the services] is in the second half of that verse. The chorus comes from a scriptural focus on what Jesus means when he says, “whatsoever you ask in my name. . . .”

Miller: The biggest challenge is to get started. Once we had part of the chorus done, I thought it could work. I think another challenge when writing a theme song is to not make it too preachy or too wordy. I don’t know if we succeeded on that front. Doug did a great job at coming up with words that were rich and reflected the theme and that would be singable. He did the bulk of the lyric writing, then we put the music to it and changed some words that were tricky to sing.

I think another challenge was writing a song that most people could connect with stylistically. We are a very diverse commu-nity reflecting many different music genres and preferences. And I suppose ours are reflected in this song to some degree.

Q: What do you hope people will draw from your music?

Klassen: If we could make the chorus our heartfelt prayer, I would be deeply moved.

Miller: I hope that this song may be a way for people to carry their assembly experience with them as they leave, and perhaps be reminded of our joint commitment to “Reclaim the Name.”

Klassen: It is not an easy process, and, of course, we are hoping that it inspires people. We don’t have a “Plan B” if it doesn’t!

Miller: Maybe there are other cases where collaboration can happen and bring other new creative expressions in the church. I hope that Doug and I can do this again—with others in our church community and beyond. I am very encouraged by a desire from many others to write songs from and for our Mennonite Church Canada community.